Opinion: Pakistan′s ignominious surrender to Islamists | Asia | An in-depth look at news from across the continent | DW | 27.11.2017

November 27 will be remembered as a "black day" in Pakistan – a day when religious hardliners forced the entire state to surrender over a blasphemy row. And the military sided with Islamists, writes DW's Shamil Shams. 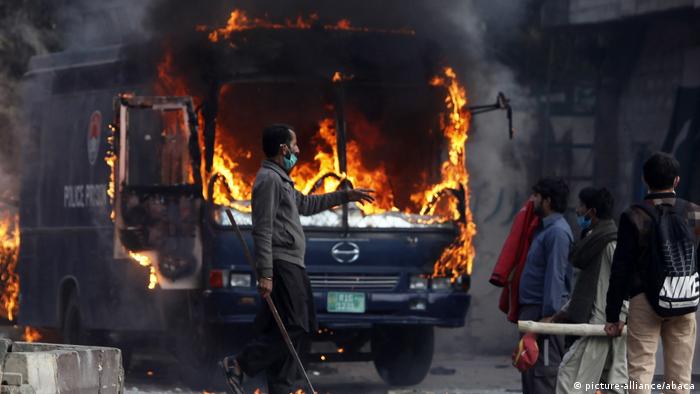 The resignation of Pakistan's Law Minister Zahid Hamid didn't come as a surprise. The government's crackdown on Islamist protesters on Saturday was a disaster as violence broke out, not only in the capital Islamabad, but in many other parts of the country.

Supporters of the Tehreek-i-Labaik Islamist party — a Barelvi sect outfit — and its firebrand leader, Khadim Hussain Rizvi, were adamant they would not end their Islamabad siege until the law minister stepped down. For three weeks, they blocked the main street connecting the capital city to Rawalpindi. Islamabad was practically under an Islamist siege and the standoff was causing immense problems for residents. 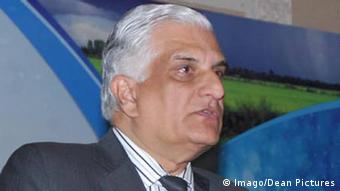 The civilian government's action against the protesters came at the order of Pakistan's Supreme Court – and this was after much reluctance and deliberation.

Blasphemy is a highly sensitive issue in Pakistan, and Islamic groups have the street power to paralyze the country. So when the police operation couldn't break up the Islamabad blockade and disperse Islamists, the government ordered the military to assist with the operation. But army chief General Qamar Javed Bajwa "advised" Prime Minister Shahid Khaqan Abbasi to deal with protesters "peacefully" and engage in political dialogue.

The army, which political analysts believe is the most powerful institution in Pakistan, also reportedly said they would not intervene in the violent situation as they could not use force against their "own people." It was a hint, an indirect message to the government that the army would not side with them in confronting religious extremists.

After these developments on Sunday, it was pretty clear that the only option for the civilian government was to surrender to Islamists. This happened on Monday.

The government could have asked Law Minister Zahid Hamid to step down on November 8, when the Islamist sit-in started. It vowed it would not bow down to extremists' pressure. That resolve rightfully received applause from the country's liberals. But if the government had to give in after three weeks since the implementation of blockade, after causing huge problems for citizens all the while, why didn't it do so already on November 8?

The government probably underestimated the situation. After all, the wording controversy didn't seem to be a big issue, and from the Western perspective, it wasn't an issue at all.

The controversy erupted in October, when the government amended electoral laws, including the wording for the swearing-in of lawmakers, who are required to recognize the Prophet Muhammad as God's final prophet.

After protests from religious groups, the government restored the oath in its original form, which was seen as more legally binding. But that did not satisfy the demonstrators. Cleric Rizvi insisted he would not end the protest camp until the law minister, who was responsible for electoral reforms, tendered his resignation.

Authorities kept giving space to cleric Rizvi and his supporters until Friday. And finally, on November 27, they surrendered the entire state to them. Hamid's resignation is not only shameful, it is also frightening.

The authorities have proven that Islamists are stronger than the state itself — by striking a deal with Islamists over the "finality" of the Prophet Muhammad issue, over an unproven blasphemy allegation, over an issue as small as the wording of an oath, which the parliament "rectified" almost immediately.

It seems that a handful of religious hardliners can make lawmakers alter laws according to their interpretation of Shariah. They have proven that they do not need electoral success in Pakistan and that they don't need to sit in parliament to make laws and govern the country.

Some say that religious fundamentalists are in fact Pakistan's real rulers. They can control the state machinery from the streets. And considering that Pakistan's most powerful institution, the army, considers them as their "own people," there is probably no need for an elected government anyway.

Pakistan's liberal activists and progressives are perturbed. What did the military, as reported in local media, mean by "own people?" Does it mean that the people in the western Baluchistan province, in the country's northern belt near Afghanistan, secular political activists in Karachi and liberal bloggers are not to be considered as Pakistani citizens?

After all, the Pakistani army is engaged in military operations in Baluchistan and northern areas. International rights organizations accuse the military of committing grave human rights violations against their "own people" in these areas. Pakistani rights groups allege the military's intelligence agencies abduct secular bloggers. The military denies these allegations though, and it has the right to do so.

Or does that mean that Islamists are "strategic assets" that the military establishment allegedly uses to keep the civilian government under pressure and as proxy jihadists to be used in Afghanistan and India?

What is clear is that the past three weeks have brought more global disrepute to Pakistan. The international community closely observed the siege and the government's decision to surrender to Islamists in the name of "political dialogue" to settle the dispute.

The country is already experiencing political turmoil, with former Prime Minister Nawaz Sharif facing a corruption trial. He was ousted in July by the Supreme Court. Many political commentators dubbed it a "judicial coup" against Sharif at the behest of military generals.

While Sharif was in power (his party is still in power), there was at least some semblance of progress in the country. There was a popular civilian prime minister at the helm, who wanted to assert his authority over the military and mend ties with India and Afghanistan. Now the government does not even have the authority to restore order in the capital.

A dark era for Pakistan?

The Islamist victory is also Nawaz Sharif's defeat. Khadim Hussain Rizvi's power base is in Punjab province, which has been the Sharifs' political stronghold since the 1980s. While opposition politician Imran Khan is clearly siding with Islamic parties, Tehreek-i-Labaik party's Rizvi has seen his popularity rise in the past few months. In September, Rizvi entered mainstream politics and, to the surprise of political observers, won more than 7,000 votes in a Lahore by-election for the seat vacated by Sharif.

It's a fearful situation not only for religious minorities but also for the majority Muslims, who believe in the "finality" of the Prophet Muhammad. Pakistan has entered an era in which a bunch of religious hardliners will have more power to dictate their decisions - from what is Islamic to what is not; and who is an infidel, a blasphemer, a sinner, a Western agent. Pakistani Islamists have demonstrated that they are the state now.