Celluloid, civil courage and soccer: Our host Peter Craven talks with Jochen Alexander Freydank about those topics and more on the DW-TV talk show ”Talking Germany.” 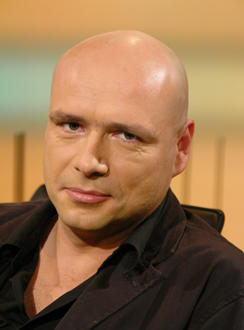 Jochen Alexander Freydank is truly self-taught. He learned how to make films through experience, having never gone to film school. Still he achieved what filmmakers around the world dream of: He won an Oscar.

Freydank made five attempts to gain a place at film schools in Berlin and Potsdam and was turned down each time. Finally, he decided to start up his own production company in order to make the films he wanted. This year, the 41-year-old reaped the rewards of that perseverance when he was awarded the highest honor the film industry has to offer – the Oscar. Freydank won the Academy Award for his short film "Spielzeugland" (Toyland). It tells about civil courage in Nazi Germany. A woman saves the Jewish friend of her young son from being deported to a death camp. The director had to fight hard to get funding for this project. Now, after his huge success in Hollywood, scripts are piling up on his desk, and Freydank can finally start on his first feature-length film.

Jochen Alexander Freydank was born in East Germany and grew up in an educated, middle-class family. His mother was a theater scholar, while his father worked at the Berlin Museum of Natural History. After his school-leaving exams, Freydank trained at the children’s programming department of East Germany’s television station, bringing himself one step closer to his career goal of becoming a director.

Freydank was 21 years old when the Wall fell. After being denied entrance to film school, he began work as a director’s assistant for film and television productions. He wrote screenplays and in 1999 founded his own production company, Mephisto Film. In addition to his job as producer of a successful series for German television, Freydank shot four short films. "Spielzeugland" (Toyland) was by far his most successful, winning the Academy Award for best live action short film, as well as 20 other international festival prizes.

Freydank counts Terry Gilliam’s "Brazil" and Werner Herzog’s "Fitzcarraldo" among his favorite works. A successful film, he says, is something you want to see more than once.

He hopes his first feature-length film, which he’d like to make in Germany, will pass this test: a literary adaptation of Franz Kafka’s unfinished novella "The Burrow." The work depicts an animal’s unsuccessful struggle to perfect his roomy earthen home, constructed to protect him from outside enemies. Freydank loves psychological thrillers – and the story seems made for movies.

Freydank has stayed true to his roots in his native Berlin. After stints in London and New York, he now lives with his partner and son in eastern Berlin’s trendy Prenzlauer Berg neighborhood.