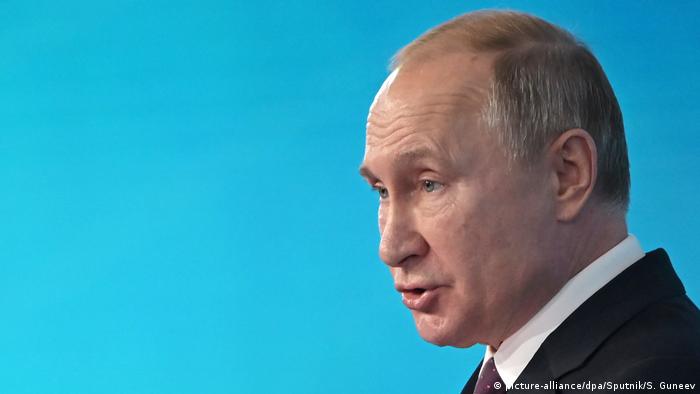 Questions are hanging over how the Kremlin will respond to the expulsion of two Russian diplomats from Germany on Wednesday. This came after Germany's government accused Russian authorities of complicity in the murder of the Chechen separatist fighter Zelimkhan Khangoshvili. He was shot in Berlin in August by a bicycle-riding assassin. A suspect is in police custody. But his passport seems to have been issued in a false name. The suspect is keeping silent. The Kremlin denies any involvement — which comes as no surprise.

As a rule of thumb, Moscow reciprocates symmetrically and swiftly. If two Russians were expelled, then two diplomats must forever leave Germany's sprawling embassy complex in western Moscow. However, at the time of this writing, no such announcement had been made. Maybe the Russian authorities are still deciding whom exactly to expel. But a more plausible explanation is that they are weighing the consequences of escalation. The German government has announced that it could impose sanctions on Russia should further proof of official involvement in the Khangoshvili murder emerge. If this were to happen it could become the biggest crisis in bilateral relations since the Berlin Wall came down.

Would Germany be able to count on the solidarity of its NATO allies in such circumstances? When Britain's government accused Russia of attempting to assassinate the former military intelligence colonel Sergei Skripal and his daughter in the English town of Salisbury, 20 NATO members expelled a total of more than 100 Russian diplomats whom they'd accused of being spies. This time such massive riposte is unlikely.

Firstly, Germany's government took a long time to level the charges. This diluted the sense of urgency of the situation. Secondly, in Salisbury an innocent British national, Dawn Sturgess, died as a collateral victim of the poisoning attempt. Khangoshvili was a Georgian national with a failed asylum application and pending deportation order and the protracted investigation also considered the possibility of a gangland killing. Thirdly, the United Kingdom benefited from its participation in the Five Eyes, an intelligence alliance with the US, Canada, Australia and New Zealand. When the US, UK and Canada act as one, other NATO allies have little choice but to follow suit — such is their clout in the alliance. Fourthly, though the Kremlin's relations with the US and UK governments have remained strained since Russia annexed Crimea from Ukraine in 2014, Germany never fully closed the door on contact with Moscow, though Berlin is ahead of many other EU nations when it comes to sanctions. Russian President Vladimir Putin knows that he can still find an audience in Berlin and Paris, even if his counterparts in Germany and France rarely agree with him. And he appreciates that.

The Day with Brent Goff: Murder by Moscow?

Despite objections from the US government and vehement protests by Ukraine, Germany allowed Russia's gas monopoly, Gazprom, to complete its Nord Stream 2 project. Officials in Kyiv see the pipeline as an attempt by Russia to get rid of a gas transit route via Ukraine and rob the country of a significant part of budget revenues. German Chancellor Angela Merkel is one of the main proponents of prodding the new Ukrainian president, Volodymyr Zelenskiy, toward some form of compromise with Putin when Russia, Ukraine, Germany and France meet at the upcoming Normandy Format working summit to help bring an end to the conflict in Donbass. And various politicians from across Germany's party spectrum have called for lifting the sanctions on the Kremlin. Public opinion in general in Germany is kinder toward Russia and its leadership than it is in Britain or the United States.

All of this should make Putin think twice before engaging in a full-scale tit-for-tat with Germany. Unlike in Salisbury, a suspect was detained in Berlin. Federal prosecutors have taken the case over from police, and the further the investigation goes the more unpleasant it may become for Russia's government. The Kremlin faces a PR disaster with a hearing in the Netherlands scheduled for March in the case of the Malaysian airliner downed over Donbass in 2014 by what investigators believe was a Russian missile. Moscow would hardly benefit from a simultaneous scandal in Germany. Russia's government may try to adopt a more conciliatory approach in the hopes of striking a deal with Berlin further down the road.

Putin, however, governs by a principle of never showing weakness. So he may decide to strike preemptively by, say, canceling his participation in the Normandy Format talks scheduled for Monday. He is not in a hurry to meet Zelenskiy, and he does not want to spar with Merkel over Khangoshvili's murder. Putin is counting on Germany's government to isolate the case from major policymaking decisions and once again not to fully close the door on Russia.