Dutch investigators say they intercepted telephone calls that implicate the Russian government in the MH17 downing over Ukraine in 2014. Prosecutors are making a new appeal for witnesses to contribute information. 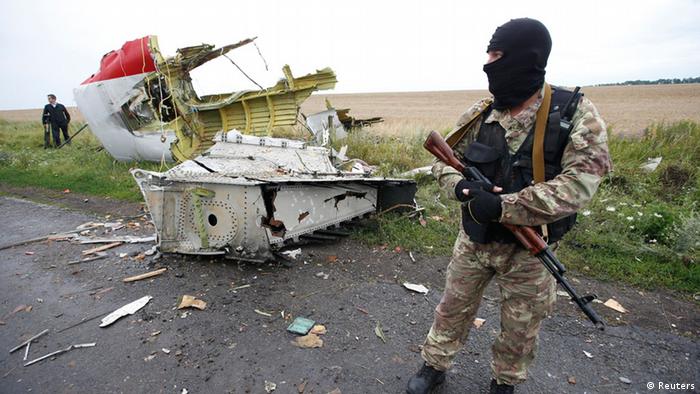 A Dutch-led investigation has publicly shared evidence that links the Russian government to the militant group responsible for the the downing of Malaysia Airlines Flight MH17 over Ukraine in 2014.

In transcripts of intercepted telephone calls released by the Joint Investigation Team (JIT) on Thursday, high-ranking Russian officials speak with leaders of the militant group "Donetsk People's Republic" (DPR) who shot down the commercial aircraft, killing all 298 passengers and crew.

Girkin, a Russian national and "defense minister" of the self-proclaimed Donetsk Republic, is one of the four suspects charged by investigators for their role in downing the aircraft.

Russian Defense Minister Sergei Shoigu's name also appears several times in transcripts of calls between militants. One mentions fighters that were coming "with a mandate from Shoigu."

Investigators say that the calls raise questions about Moscow's involvement with the anti-aircraft missile that shot down the plane.

"Russian influence on the DPR went further than military support," read a statement from Dutch investigation leader Andy Kraag. "Ties between Russian officials and DPR leaders appear to have been much closer."

The transcripts show Girkin requesting Russian military support, and Aksyonov confirming that arrangements are being made.

"The indication of close ties between Russian government officials and leaders of the DPR raise questions about their possible involvement in the deployment of the Buk-Telar (missile), which brought down flight MH17 on 17 July, 2014," read Kraag's statement.

The Russian government said on Thursday that it could not verify the authenticity of the intercepted phone calls.

Foreign Ministry spokeswoman Maria Zakharova dismissed the evidence, saying it follows a wave of "fake news" on the crash and that the information should be regarded with skepticism.

"The verdict had already been issued immediately. Everything else, the gathering of evidence, ...  supports the chosen tactic of prosecution," Zakharova said in remarks reported by the Russian news agency Interfax.

Russia has repeatedly denied involvement in the downing of the plane and has accused investigators of ignoring evidence provided by Moscow.

Flight MH17 departed from Amsterdam for Kuala Lumpur on July 17, 2014. It was shot down over eastern Ukraine by a Russian-made BUK missile. All passengers and crew, mostly Dutch nationals, were killed.

Prosecution of the four suspects identified by investigators is set to begin in March 2020. Girkin, fellow Russians Sergey Dubinsky and Oleg Pulatov, and Ukrainian national Leonid Kharchenko are all expected to be tried in absentia.

By publishing the new information, investigators hope to identify new witnesses that can shed light on unanswered questions that could aid the prosecution. Specifically, they hope to find out if Surkov and Shoigu had "a role in the planning and execution of military operations in the summer of 2014 in eastern Ukraine" when militants shot down the plane.