Opinion: Trump′s London visit was celebration lacking an occasion | Europe | News and current affairs from around the continent | DW | 04.06.2019

The US first family likely enjoyed their fancy trip to the palace, hosted by Queen Elizabeth II. Trump got to share his tuppence worth, but for what? Even the monarch's veiled hints fell on deaf ears, says Bernd Riegert. 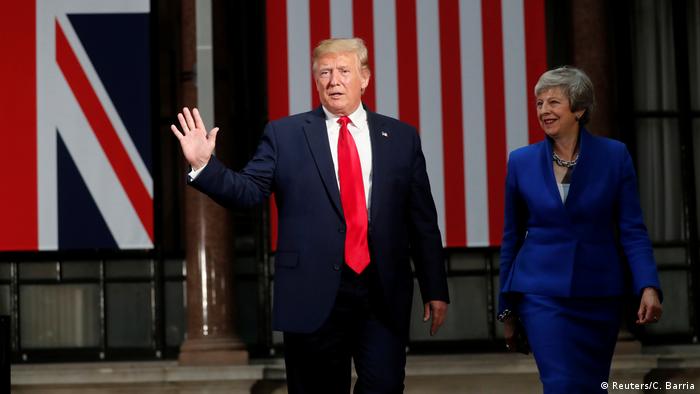 Queen Elizabeth II never reveals how she feels about this or that high-ranking visitor. Which is a shame — it would have been incredibly interesting to learn what she makes of US President Donald Trump. He was the 12th American head of state to meet the longest-serving British monarch. And he is one of just three who had to honor of partaking in an official state banquet.

The Queen, like so many Brits, will surely have wondered why the uncouth Trump, out of all US presidents, was given the honor of attending such a prestigious banquet. No answer is readily apparent — especially because his visit has done nothing to bring the nation, which is deeply divided over Brexit, closer together.

Trump has not been shy about offering up advice on how he thinks Britain should be run. He has recommended that former Foreign Secretary Boris Johnson should take over as prime minister and that his nationalist buddy Nigel Farage be included in EU negotiations.

But apart from the fact that such talks don't even exist, giving such advice is a huge affront to current Prime Minister Theresa May — even though she is on her way out and will leave Downing Street by late July the latest. Trump's advice to aim for a hard Brexit and his disdain for the European Union run counter to May's positions.

Until Trump's state visit, all US presidents who have met the British monarch have voiced their support for further European integration. Indeed, the Queen used her banquet speech to remind her foreign guest just how important international institutions are to preserve peace, and Prime Minister May presented Trump with a draft of the Atlantic Charter by Winston Churchill — though it is unlikely the American bully will have picked up on these hints.

Trump was more likely just awed by the pomp and glamour of the British monarchy: The egomaniac was like a kid in a candy shop, totally blown away by it all. At the press conference, he could not stop blabbering on about just how fantastic everything was.

When the idea to invite Trump was hatched, London lawmakers hoped he would be able to negotiate a post-Brexit trade deal. But so far, there has been no Brexit. And that means any trade deal between both nations remains just a vague idea. After meeting May, Trump reiterated that he will not negotiate a trade deal at any cost. He said that any deal must include Britain permitting, for example, US agricultural imports and health care services in the country. He has also insisted Britain, just as the US, must shun Chinese tech giant Huawei and turn its back on the Iran nuclear deal as a prerequisite for a trade agreement.

Yet this is not what Brexit proponents had in mind. They are gradually waking up to the fact that Trump may want to use trade as a way to pressure a divided Britain to make political concessions, and that he could levy sanctions on the UK, as he is doing on China, if he does not get his way. The dealmaker-in-chief is well aware of Britain's weakness and looks poised to exploit it.

The US leader and Brexiteers have completely exaggerated the economic opportunities for trade between both nations. Trump, in his hyperbolic way, has called these opportunities "phenomenal." But already today, there is extensive trade with the US, and only a handful of sectors could actually grow even further.

Yet the UK trades three times as much with the EU as it does with the US, so striking a trade agreement with the bloc would be much more important. And Britain cannot fulfill Trump's list of conditions for a trade deal if it also wants to reach an agreement with the EU. That means the British government faces a potential deadlock.

Nobody really understands why Trump was hosted by the Queen. But we should also remind ourselves that the British monarch has in the past also hosted state banquets for Romania's Communist-era dictator Nicolae Ceausescu, and for Zimbabwean strongman Robert Mugabe. So she is experienced in handling unusual guests.

Trump is also unique in that he is constantly in denial of the reality that surrounds him. He claimed, for instance, that there were just small dispersed anti-Trump protests in London and that across the city many people had welcomed his visit. That is simply and demonstrably false — it was exactly the opposite.

Donald Trump arrives in the UK to pomp and protest

The US president has met with the British royal family, but exacerbated a feud with London's mayor after arriving in the UK. Donald Trump has been accused of "entirely unacceptable interference" for his Brexit comments. (03.06.2019)

Opinion: Rolling out the red carpet for 'nasty' leaders is actually rather British

Seeing Donald Trump go after London Mayor Sadiq Khan was as predictable as seeing Trump spell his name wrong. But Khan's mistaken about one thing, Mark Hallam says; it's very British to fawn over this misogynist fibber. (03.06.2019)

The carrot, or the stick? The European Commission no longer wants to put up with economic blackmail such as that exerted by China. And it has new tools at hand to fight it, as Bernd Riegert reports from Brussels.