Both President Trump and Prime Minister May said they are committed to securing a strong trade deal after Brexit. Mass protests against the president's visit also took place, though Trump dismissed them as "very small." 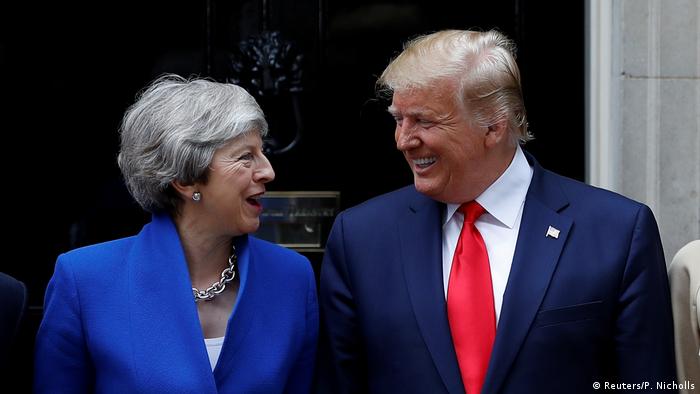 US President Donald Trump kicked off the second day of his visit to the UK on Tuesday by meeting with Prime Minister Theresa May and business representatives from both countries.

At a press conference following private talks at Downing Street, both Trump and May underscored their commitment to a bilateral trade deal after the UK leaves the European Union, which is now slated to happen in October.

"There is tremendous potential in that trade deal, I say probably two and even three times what we're doing right now," Trump said.

When asked by a reporter about whether or not the UK's National Health Service (NHS) could also be up for debate in a future trade agreement, Trump said: "I think that everything is on the table."

May praised the "precious and profound" special relationship between the US and the UK, but acknowledged that she has several differences with Trump, including on Iran and the climate crisis.

This will be the pair's final meeting, as May is stepping down on June 7, Trump, however, earlier told the prime minister she should "stick around," as he arrived at her residence.

Before his visit to the UK, Trump said the UK should abandon the prospect of a clean exit from the EU if they could not get an agreement they liked.

But the US president eased up on his criticism of May for her handling of Brexit, declaring that history will remember her fondly if the UK successfully leaves the EU.

"You are a tremendous professional and a person who loves her country very much," Trump said to May during the press conference. "Perhaps you won't be given the credit you deserve."

Nigel Farage, leader of the newly formed Brexit Party that won 29 seats in EU parliament in May's European elections, later met Trump at the US ambassador's residence. Farage tweeted after the meeting that he had a "good meeting" with Trump, saying the US president is concerned with how long Brexit is taking.

"He absolutely believes in Brexit, thinks it's the right thing for the country to do, and he's concerned that it seems to be taking a very long time," Farage said on his LBC radio show.

Trump and May also discussed China, with Trump brushing off suggestions that the US might limit intelligence sharing with the UK over concerns that Chinese telecommunications giant Huawei could be involved in building the UK's 5G network.

The president said he was certain they are "going to absolutely have an agreement on Huawei and everything else."

The US leader had already caused a commotion before he landed, tweeting from Air Force One that London Mayor Sadiq Khan, who has openly criticized the president, was a "stone cold loser."

His comments were made ahead of a day of pageantry that included tea with Prince Charles and a state dinner hosted by Queen Elizabeth.

Some of Britain's largest-ever demonstrations against a foreign leader also took place on Tuesday at the "Carnival of Resistance" in central London. Tens of thousands of environmental activists, womens' rights campaigners, and anti-racism protesters took to the streets to show their condemnation of Trump's policies.

Labour Party leader Jeremy Corbyn, who did not attend Monday's state dinner out of protest, condemned Trump's comments about London's Mayor and urged for the US president and his delegation to push for "a world that is one of peace and disarmament."

At the press conference with May, Trump dismissed the protests, saying that they were a "very small group of people" and described Corbyn as "somewhat of a negative force."

The infamous "baby Trump" balloon made an appearance outside the location where the president is meeting with the prime minister.

"We're trying to remind the president how unwelcome he is in this country," said balloon co-creator Leo Murray.

"We're also, in a light-hearted way, trying to articulate the strength of feeling against Donald Trump and his politics of hate," he said. "We want to put a smile on people's faces as well as make a serious point."

US President Donald Trump has said former British Foreign Secretary Boris Johnson would be an "excellent" choice as the next prime minister of the UK. He also suggested that the American wife of Prince Harry was "nasty." (01.06.2019)

US President Donald Trump to visit Britain in stasis

In London, US President Donald Trump will be met with wide-scale protests and a febrile political climate. Outgoing Prime Minister Theresa May issued the invitation before her days in office were genuinely numbered. (02.06.2019)

In an emotional address, Theresa May has announced she will resign as prime minister on June 7. The race to succeed her will likely start after a state visit by US President Donald Trump. (24.05.2019)