US President Donald Trump to visit Britain in stasis | Europe | News and current affairs from around the continent | DW | 02.06.2019

US President Donald Trump to visit Britain in stasis

In London, US President Donald Trump will be met with wide-scale protests and a febrile political climate. Outgoing Prime Minister Theresa May issued the invitation before her days in office were genuinely numbered. 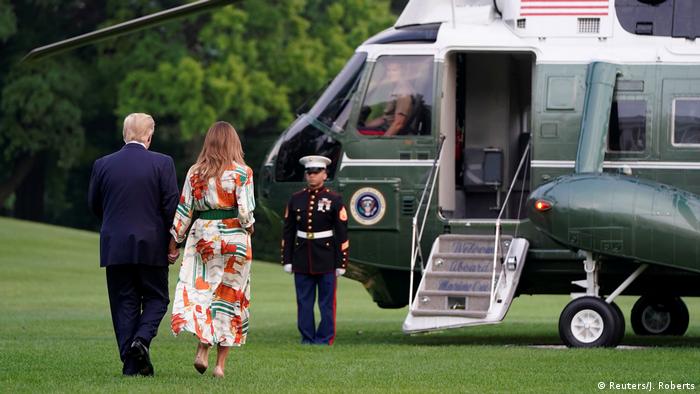 When Donald Trump visited the UK in July 2018, the trip was marked by demonstrations: Tens of thousands of people gathered in central London to protest against him, and a six-meter (20-foot) "Trump baby" blimp, depicting the president as a baby in a diaper, was inflated outside Parliament. As Trump played golf at the resort he owns in Scotland, a protester paraglided over the hotel.

Undeterred by this inventive range of protests, Trump will return to the UK on June 3, this time accompanied by his wife, Melania Trump, for a full three-day state visit. These formal trips to the UK are arranged by invitation from the queen, who acts on advice from the government. They are grand occasions defined by ceremony — such as a carriage ride through London and a banquet at Buckingham Palace. But they are also used by the government to further Britain's national interests.

When she announced the visit in April, Theresa May said it was an "opportunity to strengthen our already close relationship in areas such as trade, investment, security and defense, and to discuss how we can build on these ties in the years ahead." But the political situation in Britain is highly changeable; in the weeks since the state visit was announced, May has set a date for her departure, and will be stepping down as prime minister on June 7, two days after Trump's visit.

"The meaning of the visit has changed since it was first mooted and when the date was first set," says Matthew Cole, lecturer in history at Birmingham University. "The purpose may originally have been to indicate support for the UK from the biggest economy in the world, in the aftermath of Britain officially leaving the EU. None of this has come true. In this vacuum of meaning, Trump's own unpredictable behavior might become very important — for instance, who will he meet privately? Will he meet Nigel Farage or Boris Johnson?"

Protesters have pledged to mobilize people in large numbers again, with the team behind the baby blimp crowd-funding to inflate it again. Organizers plan to occupy Trafalgar Square and have promised a "carnival-like atmosphere." 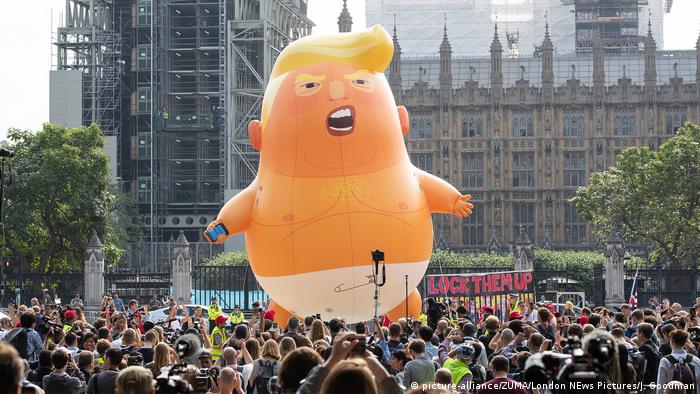 The "Trump baby" blimp is expected to fly again during the president's visit.

"Our protest isn't just about Trump — our movement has never been about one man," says Shaista Aziz, an organizer with the Stop Trump Coalition. "We are protesting Trump's state visit, but we are also protesting the politics of hate and division, corporate greed, climate crisis denial, the scapegoating of migrants and refugees, the increase in open racism, the rowing back of women's rights and reproductive rights, attacks against trans and gay people that we are seeing here in the UK, the USA, across Europe, Brazil, India and beyond."

The state visit has been a long time coming. While the British monarch makes the formal invitation for a state visit, it was originally offered by May when she became the first foreign leader to visit Trump after his inauguration in January 2017. Trump is only the third US president to be accorded the honor of a state visit, after George W. Bush in 2003 and Barack Obama in 2011.

With many across the political spectrum in Britain questioning May's legacy as prime minister, the state visit of an unpopular US president highlights Britain's ongoing stasis. "A failed prime minister is hosting a failed president next week in Downing Street," says Aziz. "May has done nothing to heal the wounds of a country bitterly divided and in crisis. When this state visit was handed to Trump, it was done as a bargaining chip to ensure Britain would be at the front of the queue for a mythical Brexit trade deal and to cement the special relationship. Brexit is unraveling, the government is unraveling." 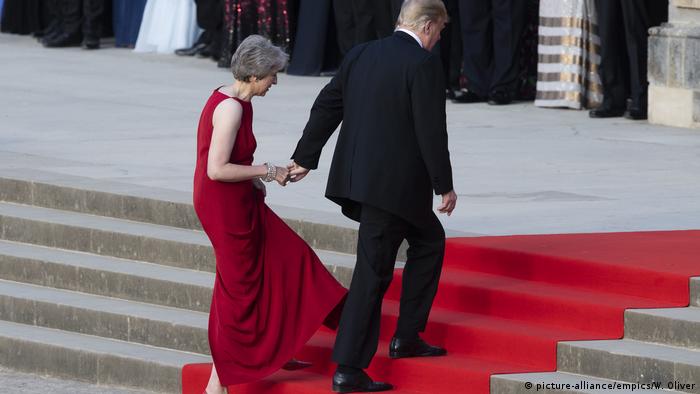 Although Trump will be afforded many of the honors of a formal state visit, in other ways it will be an abnormal trip. John Bercow, the speaker of the House of Commons, has said he would be "strongly opposed" to Trump addressing Parliament, as is customary, because of his racism and sexism.

"There is nothing normal about Trump or the Trump presidency and this is a far-from-normal state visit," says Aziz. "However this visit is spun, Trump will be kept away from protesters and he won't be visiting Parliament. This reflects how much Britain rejects Trump and his politics."

During the working visit in July, photographs of Trump and May holding hands caused uproar, demonstrating how much even a seemingly insignificant act can impact the news agenda. "Any gesture or word from a US president can prompt a strong reaction," says Cole. "What we have now is an even less managed, less predictable, more fluid context in which to put the human pinball that is Donald Trump."

Support for Labour and the Conservatives has collapsed, with the Brexit Party and pro-Remain parties coming out on top. So where does this leave the UK? Samira Shackle reports from London. (27.05.2019)

Theresa May came into power after the Brexit referendum, yet she never managed to unite the Conservatives. Before stepping down as prime minister, May was one of the most powerful women ever in British politics. (24.05.2019)

King Charles III has addressed the nation for the first time since the death of his mother Queen Elizabeth II.