In an emotional address, Theresa May has announced she will resign as prime minister on June 7. The race to succeed her will likely start after a state visit by US President Donald Trump. 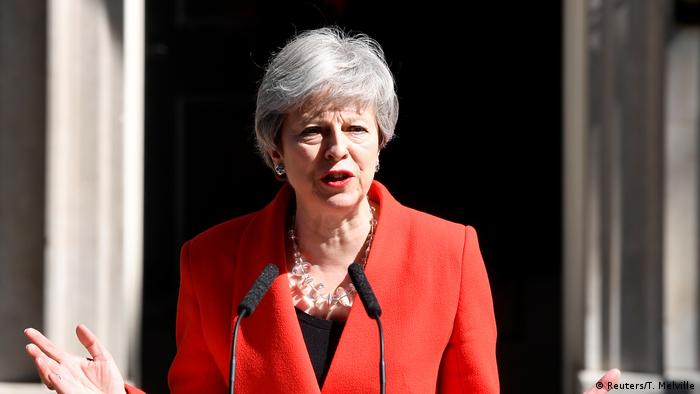 Theresa May said on Friday that she will step down as leader of the Conservative Party, and therefore prime minister, on June 7.

May spoke of her "deep regret" at being unable to deliver Brexit despite her best efforts.

The announcement came after she met with Sir Graham Brady, chairman of the influential 1922 Committee of Conservative backbench MPs.

"The Brexit referendum was a call for profound change in our country," she stressed. "I did my best to implement the will of the people."

Fighting back tears, she said she was "the second female prime minister, but not the last," adding it was "the honor of my life to serve the country I love."

She will remain in charge on a caretaker basis until a successor is found.

The frontrunner to replace May, Boris Johnson, thanked her for "stoical service to our country and the Conservative Party." He also said, "It is now time to follow her urgings: to come together and deliver Brexit."

Pensions Secretary Amber Rudd also responded with a call for unity: "As a party we must come together to make a success of the next phase of our party's great story. Brexit is a process and compromise is needed to pass a deal that works for everyone."

"The prime minister is right to have resigned. She cannot govern, and nor can her divided and disintegrating party. The last thing the country needs is weeks of more Conservative infighting followed by yet another unelected prime minister," Corbyn said.

Sturgeon said that May's departure "will not solve the Brexit mess that the Tories have created. The prospect of an even more hard-line Brexiteer now becoming PM and threatening a no deal exit is deeply concerning."

May had faced increasing pressure to resign in recent months following three unsuccessful attempts to push her Brexit deal through parliament.

A last-ditch 10-point plan revealed this week was immediately met with derision from friends and foes alike. Jeremy Corbyn called it a "rehash of her old bad deal."

Leader of the House of Commons, Andrea Leadsom, left her position on Wednesday, saying she no longer believed in the government's approach to exiting the European Union.

May had initially planned to publish her Withdrawal Agreement Bill on Friday, but said that would be postponed until June 3. She had described her plan as "one last chance" for Brexit to happen.

The leadership contest will likely start on June 10, following a state visit by US President Donald Trump. "Theresa May will be prime minister to welcome him and rightly so," said Foreign Secretary Jeremy Hunt.

Former Foreign Secretary Johnson is the current favorite. He can expect to face competition from former Brexit Secretary Dominic Raab, as well as a potential second run for power from Leadsom.

Leadsom lost out to May in the bid to succeed David Cameron in the immediate aftermath of the Brexit referendum in 2016.

Theresa May's time in office has been dominated by Britain's attempts to leave the EU. The current date of departure is October 31, providing Parliament passes the divorce deal.

The delay to Brexit means the UK has taken part in European Parliament elections, which run across the bloc until Sunday.

Brexit: UK Labour Party breaks off talks with Theresa May

Britain's opposition Labour Party says talks with Prime Minister Theresa May on the Brexit stalemate have reached the limit. Labour leader Jeremy Corbyn said the government was too unstable for any deal to be secured. (17.05.2019)

UK Prime Minister Theresa May's final Brexit gamble is to seek help from an equally divided and dysfunctional Labour Party. It's almost like the blind leading the blind, as Rob Mudge reports. (03.04.2019)

A day after Prime Minister Theresa May presented the UK-EU draft withdrawal agreement to her Cabinet, a slew of ministers have quit in protest at the deal. Rob Mudge takes a look at who's gone so far. (15.11.2018)

Ireland's EU commissioner says the halting of border checks on goods crossing the Irish Sea would break the UK's Brexit deal with the bloc, and international law.