Respect was the predominant tone among European leaders following UK Prime Minister Theresa May's resignation. But they warned that her successor will have to provide "rapid clarification" on Brexit. 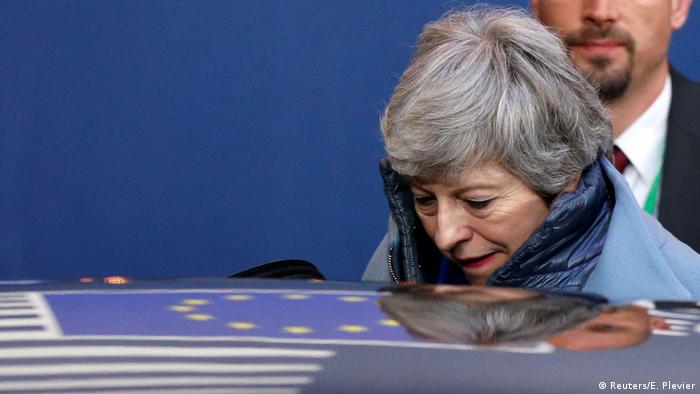 Reactions from the rest of Europe started flowing in shortly after Theresa May announced she will step down as British prime minister on June 7.

May's decision comes at a time when the legislation covering the UK's exit from the EU remains stuck in Parliament, as lawmakers have so far been unable to agree on the contours of a withdrawal agreement.

German Chancellor Angela Merkel was keen to extol the virtues of her relationship with May, saying: "I always worked very well with the British Prime Minister."

Merkel also stressed that future relations would remain unharmed, despite the upheaval. "Britain's departure from the European Union is a major transition and regardless of what happens now in Britain, the German government will do everything to achieve a good partnership, an orderly exit and good cooperation," she said.

French President Emmanuel Macron urged "rapid clarification" from Britain on what it wants from Brexit. In a statement released by the Elysee Palace, Macron said he stands ready to work with a new British prime minister, but that "the principles of the EU will continue to apply, with the priority on the smooth functioning of the EU."

Irish Prime Minister Leo Varadkar warned that the election of a new prime minister in Britain may lead to a new phase in Brexit negotiations that could be "very dangerous" for Ireland.

"We may see the election of a euroskeptic prime minister who wants to repudiate the withdrawal agreement and go for no deal or we may even see a new British government that wants to see a closer relationship with the EU and goes for a second referendum," Varadkar told Ireland's Virgin Media News.

"But whatever happens we are going to hold our nerve. We are going to strengthen and build our alliances across the European Union and we will make sure that we see Ireland through this," Varadkar said.

Dutch Prime Minister Mark Rutte said that he had spoken to May to convey his thanks and respect following her announcement. He tweeted that "the deal reached between the European Union and Britain for an orderly Brexit remains on the table."

Czech Prime Minister Andrej Babis said he hopes Britons will have the opportunity to hold fresh elections to choose the country's leadership followed by a second Brexit referendum, adding that such a result would be "the best for all."

"I still hope that [Britain] will hold a snap election and at the end they will have one more referendum," he said. "That the [British] people finally understand that the misinformation that they received [about Brexit] is not true and Britain will stay in the European Union."

Spain, however, warned that a hard Brexit seems almost impossible to avoid after May's resignation. "The British government, the British Parliament" would be "solely responsible for a no-deal exit [from the EU] and its consequences," said Spanish government spokeswoman Isabel Celaa.

Predicting "difficult times" ahead, Celaa said Britain's anticipated "disorderly exit" was "a clear example of what can happen if we let ourselves get swept along by extremes."

Meanwhile, the European Commission said President Jean-Claude Juncker will "equally respect and establish working relations" with the new UK prime minister, "whoever that might be." Juncker also lauded May as "a woman of courage," and said he viewed her resignation "without personal joy."

Britain is set to leave the EU without a deal on October 31 unless an agreement can be reached with the bloc that is also acceptable to Britain's Parliament.

More foreign firms are relocating their operations to Germany than ever before, according to new figures. There was a big increase in the number of British firms setting up, apparently because of Brexit. (13.05.2019)