Donald Trump's Iran nuclear deal withdrawal is his most pernicious foreign policy decision yet and a huge blow for trans-Atlantic ties. It also raises the stakes for another looming nuclear showdown, says Michael Knigge. 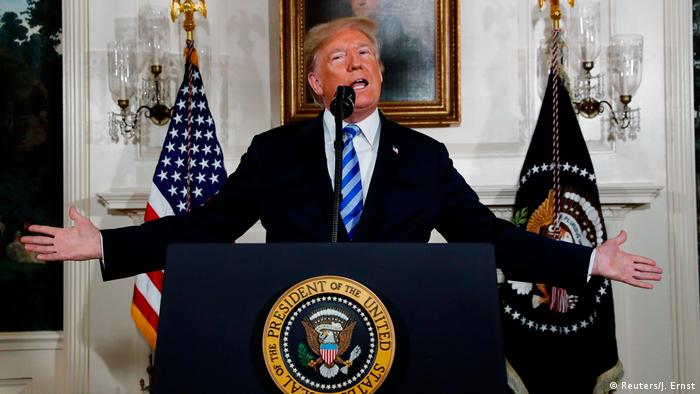 The long-standing, almost visceral hatred many in the Trump White House felt towards the Iran nuclear agreement was probably best summed up on Monday night by former presidential national security aide Sebastian Gorka.

In Tuesday's bellicose remarks about his decision to pull the United States out of the Iran deal, President Donald Trump stopped short of making any comparable reference to physical violence. But he reiterated his long-held conviction that the Iran deal is bad for the US and the world, and that Washington's allies agree with that assessment.

The Iran nuclear agreement was certainly not perfect — no compromise ever is. But what was hammered out after more than a decade of tedious international negotiations severely and verifiably constrained Tehran's nuclear program for the short and medium term.

Iran has so far complied with the terms of the accord, a fact that has repeatedly been confirmed by independent international monitors and US intelligence officials, and is generally accepted worldwide — notwithstanding recent claims to the contrary by Israel's prime minister, which were referenced by Trump on Tuesday.

Ensuring that Iran can not get a nuclear weapon for more than a decade, as the accord did, is a significant achievement. It has made the region, the world and the US safer.

The deal was reached through often difficult but very close cooperation between the US and Europe, led by the so-called E3 — Germany, France and Britain. It is also important to note that China, Russia and the broader international community backed it as well. What's more, the nuclear agreement also provided a framework for how to successfully and peacefully curb perceived nuclear weapons ambitions of problematic international actors.

European allies not in agreement

The erroneous assertion that Washington's allies share the president's view on the Iran deal is a particularly brash claim to make after German Chancellor Angela Merkel and French President Emmanuel Macron just recently visited the White House in a last-ditch effort to convince Trump to remain in the agreement. In fact, it is a slap in the face for the Europeans who had advocated honestly and earnestly for this deal. Even in Israel, military leaders have repeatedly expressed their preference for the US remaining in the accord rather than nixing it.

Make no mistake, Trump's move to pull the US out of the Iran deal has little to do with a coherent global strategy that would make the world safer or advance Washington's and its allies' interests. It has much to do with raw sentiment and domestic politics.

Trump and many of his followers and aides despise everything his predecessor, Barack Obama, did and have made it their goal to eradicate his legacy. That the Iran nuclear deal, Obama's signature foreign policy achievement, is on the chopping block should therefore come as little surprise. Especially since Trump replaced former National Security Advisor H.R. McMaster and Secretary of State Rex Tillerson, who favored staying in the deal, with John Bolton and Mike Pompeo, who vehemently oppose it.

Trump ran his campaign on the promise to nix what he repeatedly called the worst deal ever. Doing so now will assure he can use it as fodder in his next rallies for the upcoming midterm elections.

What comes next after Trump's announced exit from the Iran deal remains unclear, since no prepared and credible alternative has been made public, other than the president's general promise that he will negotiate a better accord — somehow, sometime.

If and until that happens — and that's a big question because there is little appetite for new negotiations in Europe, Iran or in the international community — Tehran will be de-facto unrestrained from its nuclear shackles, which in turn will only increase volatility in the region.

But at least as worrying as Trump's Iran gamble is the fact that nixing the deal will only increase the already huge pressure for the president's upcoming talks with North Korean leader Kim Jong Un.

Not for Kim, which Trump may think and claim — but for the president himself. That's because after having shredded a verifiable international agreement that successfully curbed Iran's nuclear program, Trump now has to deliver an accord that goes much further. Iran did not even have nuclear weapons. North Korea does.

Trump has now created one new nuclear crisis and raised the stakes on an existing one. Trying to solve both peacefully after taking a wrecking ball to key US partners in Europe and Asia is a tall order for the gambler-in-chief. It is also a dangerous prospect for the world.

North Korea's "rocket man" and America's "dotard" once threatened to fire nuclear weapons at each other. Now they want to discuss peace. DW charts the major events in the Trump-Kim story. (09.03.2018)

Merkel makes final appeal for Germans to get vaccinated 4h ago

Opinion: Who decides that omicron is a 'South African' variant? 5h ago