Romania's supreme court has lifted sanctions against corruption fighter Laura Kovesi. That's a defeat with consequences for notorious crooks in Bucharest — and a shred of hope across the EU, writes Robert Schwartz. 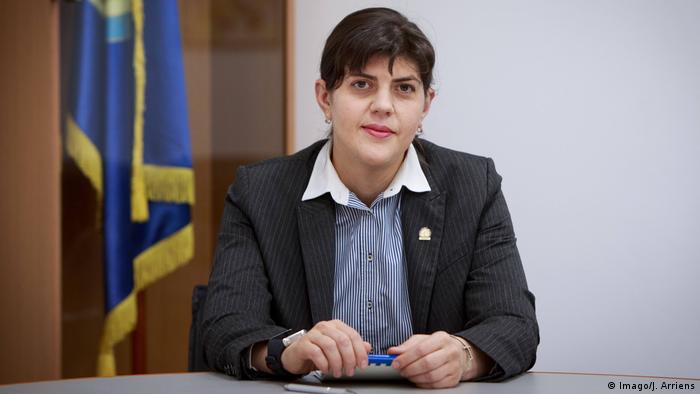 The independent judiciary in Romania still exists. At least in part. The Romanian social-liberal government has not managed to make all institutions fall in line. That's the first good news from Bucharest. The Supreme Court has lifted with immediate effect all restrictions on freedom and travel imposed on Laura Codruta Kovesi a week ago by a "special unit" of the public prosecutor's office.

The former head of the Romanian anti-corruption agency DNA can thus begin her trip to Brussels, where a decision is to be made over the next few days on who will become the head of the planned EU prosecutor's office. The public prosecutor Kovesi— feared by many corrupt Romanian politicians — is the European Parliament's clear favorite for the job.

The second piece of good news is no less significant: Romania's international partners are still united in their resolute stance. The letter sent by the twelve ambassadors from Western countries, including the German one, must be mentioned first. It strongly warns against further attempts to bring the judiciary under political control.

Similarly worried tones were heard almost unanimously from the EU Commission and the European Parliament. These are last, almost desperate attempts to bring the government in Bucharest to its senses before sanctions are imposed. It would be a first for a member state to be slapped with Article 7 ― the EU's last and harshest option ― during its own EU Council presidency.

And what is the government in Bucharest doing?

Prime Minister Viorica Dancila, in her tried and true manner, raved against any "interference in the internal affairs of the country" and insulted her partners and allies.

Her party leader, Liviu Dragnea, the head of the so-called Social Democrats, who was sentenced to probation for electoral fraud, expressed a similar opinion.

In a second trial for abuse of office, he had to miss several appointments for health reasons. In the first instance Dragnea, who is the president of parliament and pulls the political strings, was sentenced to three and a half years in prison. He and his assistants have been trying for over two years to totally subordinate the judiciary in order to finally be able to govern according to their own laws.

So far, civil society and liberal-conservative President Klaus Iohannis have been able to pull the emergency brake at the last second several times. But they weren't able to completely stop the anti-European path of the corrupt individuals in the government.

A referendum to save the rule of law

The hope of many Romanians now rests on Europe. That is why the concentrated position of Brussels, Strasbourg and the ambassadors of the Western partner countries was the exact right signal at the right time.

On Thursday, President Iohannis added something: on May 26, when the European elections will be held, Romanians are to vote in a referendum on whether they want to continue to be governed by corrupt and convicted politicians, and whether the government should continue being able to take political power over the judiciary through emergency decrees. The foreseeable answer of a large majority should cause Dragnea and his associates sleepless nights.

And the EU? It will have to apologize to its citizens for having acted too hesitantly in so many cases. The governments in Poland, Hungary and Romania should have been reminded of common values and obligations much sooner. With vigor and, if necessary, with sanctions. For the good of the people in these countries — and the entire bloc as a whole.

Just as Romania is set to take over the presidency of the Council of the EU, the government in Bucharest has shown its true colors. The Communist Party, presumed dead, is actually alive and well, writes Robert Schwartz. (17.12.2018)

Romania's justice minister is aiming to stop his own compatriot from heading the EU prosecutor's office. Critics say the move is another example of the Romanian government blocking the work of anti-corruption officials. (10.02.2019)

Canada: Bishops apologize for abuse of Indigenous children 1h ago