Thousands of Romanians across the country protested against an emergency decree they say has further undermined anti-graft efforts in one of Europe's most corrupt countries. Prosecutors and judges have vowed to strike. 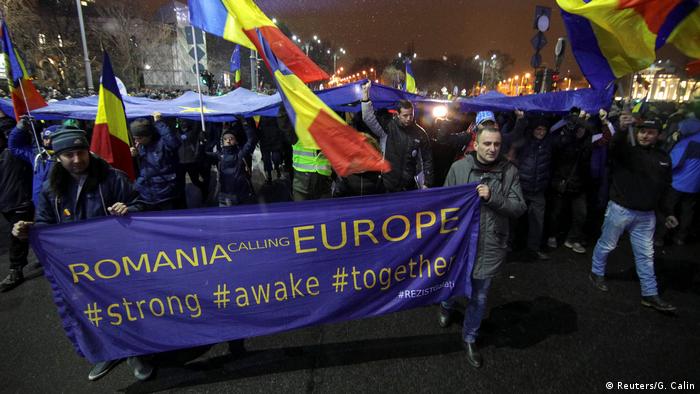 Thousands of Romanians across the country took to the streets on Sunday to protest against a government decree that critics say undermines the rule of law.

Some 10,000 people attended rallies in the capital, Bucharest, local media reported. Smaller protests took place in at least 10 other cities.

In Bucharest, people blocked traffic outside the government's headquarters and shouted "Justice, not corruption" and "Shame!"

Kovesi was fired as DNA chief in July by the ruling Social Democrats after leading investigations into government corruption.

The government then ordered an investigation into Kovesi after she was nominated to lead the European Public Prosecutor's Office. Kovesi accused the government of undertaking a smear campaign against her.

'Revoke the decree in its entirety'

Romania's magistrates have denounced the decree and are refusing to meet with Prime Minister Viorica Dancila on Monday to discuss the order.

"The independence of the judiciary is non-negotiable," the magistrates' associations said.

"Any dialogue regarding the approval of the ... decree should have been initiated before it was approved, not after. The only solution left now is to revoke the decree in its entirety."

One of Europe's most corrupt countries

The European Union, which had praised Kovesi's work at the DNA, said the recently passed decree was of "great concern."

The bloc's executive arm, the European Commission, has accused Romania of failing to fight corruption and maintain strict EU rules on judicial independence. The country's entry into the 26-country Schengen zone of passport-free travel depends on it meeting those rules.

Prosecutors across Romania have said they will only work on emergency cases in protest of the emergency decree for three to seven days beginning on Monday. Many judges have also vowed to follow suit.