Artists explore the exodus of Romania′s youth | Europe| News and current affairs from around the continent | DW | 26.10.2018

Young Romanians find themselves with limited options in a corruption-riddled society. Artists are highlighting the situation in their works, but where does the future point? Medana Weident reports from Piatra Neamt. 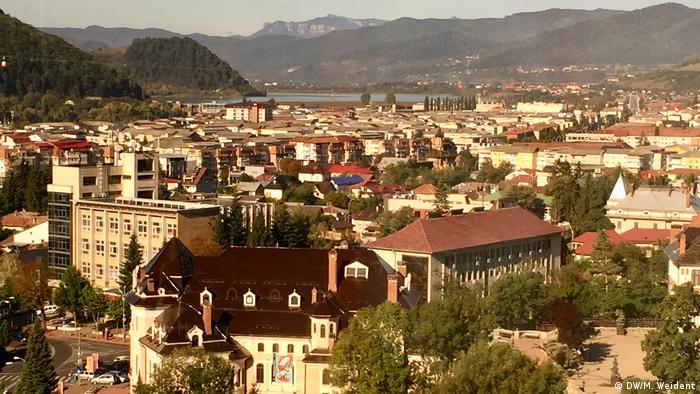 But what happened to the country after the fall of communism in 1989 was different from what people had hoped. Industry in the southeastern European nation collapsed like a house of cards; mass unemployment ensued which was then and followed by a wave of emigration — one that continues to this day.

Here, especially in rural areas, countless children grow up without their parents. If they are lucky they are left in the care of their grandparents. Sometimes they are looked after by neighbors. It's not uncommon for contact between relatives to be limited to Skype calls. People even talk about "Skype families."

About three and a half million Romanians have emigrated in the past ten years. Many departures are unreported, however, so the figure is likely to be higher.

After Syria, Romania is the country whose diaspora has grown the most in terms of percentages between 2000 and 2015, according to a UN report from 2015. According to the National Institute for Statistics (INS) in Bucharest, a Romanian leaves the country every five minutes and 27 seconds.

Mr. Nicu is a local who proudly tells us that his daughter has just started her medical studies in Iasi. She had already signed up for a language course: German. There is a shortage of skilled workers in Germany, and well-trained doctors from abroad are in high demand. Many young people studying already plan to leave the country after graduating — and can anyone blame them?

The hope remains that one day Romanians will no longer see a reason to leave their country. That Romanian youth will envision their future in their homeland and as a place where their dreams come true. Because in Romania, the so-called "brain drain" is not an abstract phenomenon. It can be felt everywhere; in the paralyzing corruption, the clouded political landscape and the deeply divided society.

This, in turn, creates a sense of hopelessness that leads many to seek happiness elsewhere. It has affected the entire development of Romania: doctors, medical personnel, handymen, engineers, IT specialists are all missing.

Art and theater: Enlightenment and hope

Piatra Neamt, in Romania's east, is a city steeped in history. Its historical center is the ensemble of the court of Stephen the Great, the most notable Moldovan prince, who ruled the province for almost 50 years starting in the mid-15th century.

The picturesque town on the banks of the Bistrita river is surrounded by the imposing peaks of the Carpathian mountains. There are also prefabricated buildings — relics that remind the observer of the country's communist past. Yet the streets are clean, the people open and friendly.

Piatra Neamt is known across the country for its youth theater, which this fall celebrates its 60th birthday. The theater is where the most successful actors and directors in the country began their careers.

The theater's annual festival — the first international festival in Romania — can also look back on 30 years of history. Director and playwright Gianina Carbunariu took the reins of the theater a year ago.

At many German and European stages and international festivals, such as the one in Avignon, France, her works cause a stir. Dictatorship, corruption, migration, and globalization are just some of the themes Carbunariu deals with in her plays.

Carbunariu's new creation "Work in Progress," on which she has collaborated with young actors from all over Italy, examines the European labor market in all its facets.

It is not only about young Italians, but also about workers from Eastern Europe, as well as refugees. "It was interesting to find out that mechanisms of exploitation actually function the same everywhere," says Carbunariu.

After performances, the audience often has the opportunity to ask questions. "That's our duty as artists," Carbunariu emphasizes. "We can't change the world, but we can understand it better with the help of theater, art. It is food for thought — and that is not insignificant."

An atlas of beauty

An atlas of beauty

In the city's art museum I meet Sylvia Traistariu, who studied art in Cluj-Napoca and Bucharest, and whose paintings also highlight social and political themes. "It is with great concern that I observe the development of our society. Europe's, too...because they cannot be separated from one another." A series of Traistariu paintings bear the title "Quo vadis?" — the famous biblical Latin phrase meaning "where are you going?"

"I try to draw attention to the fact that we are headed in the wrong direction. We have become slaves to money in a world that resembles a huge shopping mall."

The consumerist societal processes that developed in the West happened here in Romania from one day to the next.  As an artist, she laments the lack of perspective in her homeland.

"Young people here have the feeling that they cannot realize their professional potential. That's why there is massive emigration. It's not just about money. In Romania, I feel, people are condemned to staying mediocre no matter how good they are."

Opinion: What is happening in Romania is not democracy

'Bucharest Pride' 2018: A victory for tolerance

Thousands danced in the streets of the Romanian capital as a mass demonstration organized by the governing Social Democratic Party was held just a stone's throw away. In the end, it was a joyful celebration of diversity. (10.06.2018)