'Bucharest Pride' 2018: A victory for tolerance

Thousands danced in the streets of the Romanian capital as a mass demonstration organized by the governing Social Democratic Party was held just a stone's throw away. In the end, it was a joyful celebration of diversity. 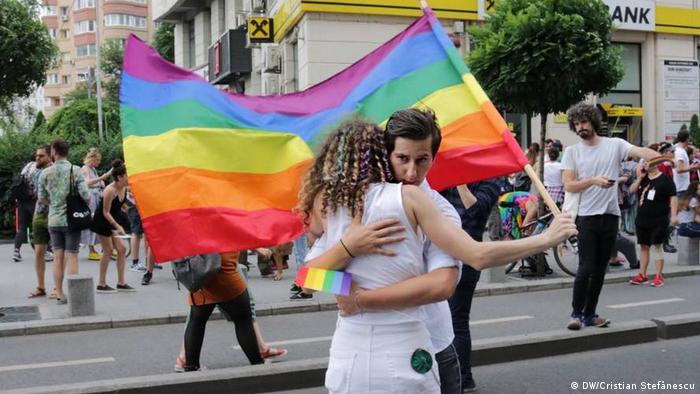 On Sunday, some 10,000 people took part in the 14th annual gay and lesbian "Bucharest Pride" parade – a record for the Romanian event. And there was special reason to celebrate this year: Earlier this week, the European Court of Justice (ECJ) handed down a precedent-setting decision for same-sex couples: The EU's highest court declared that a gay US-Romanian couple had the same residency rights within the EU as any other married couple.

The wheels of justice in Romania have been grinding slowly for the last six years as Romanian Adrian Coman and his US husband Claibourn Robert Hamilton have fought for the right to legally reside in the country as a same-sex couple. Coman and Hamilton married in Belgium in 2010 and now they have finally won their battle. 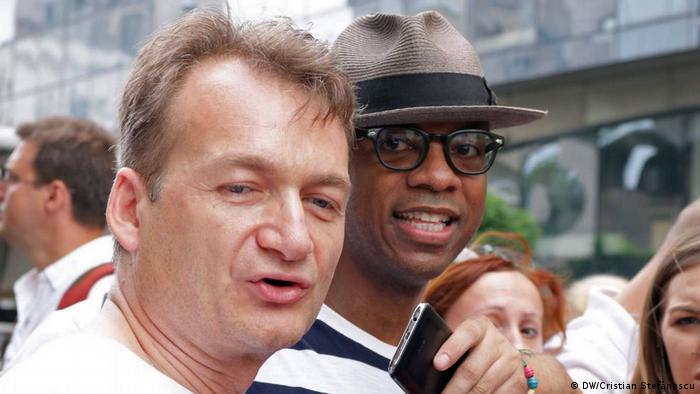 The 'heroes' of the parade: Adrian Coman and Claibourn Robert Hamilton

The wheels of justice

Coman and Hamilton were undoubtedly the stars of this year's parade. It seemed every onlooker wanted to take selfies with the "heroes," who were asked to recount their arduous legal battle again and again. "We really had the right to be here in 2012, when we demanded the government recognize us as a same-sex couple. But now we are officially in Bucharest as a married couple," as Coman told DW in a quiet moment on the sidelines of the march. 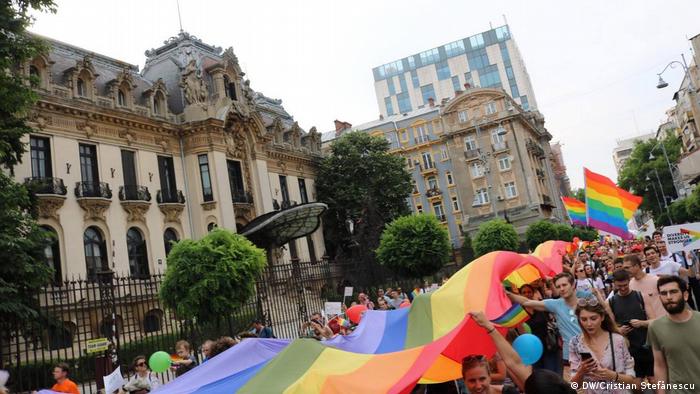 The parade went through the center of the city

A small piece of normalcy

Several rows of police stood guard along the parade route on Bucharest's magnificent boulevard, Calea Victoriei. Just a few hundred meters (yards) away, a mass demonstration, organized by the ruling Social Democratic Party and its supporters, had just gotten underway in protest to the supposed overreach of the Romanian justice system and the creation of a so-called "parallel state."

Although last year's pride parade was held in a park, away from the homophobe majority of Romanian citizens, this year's event saw participants proudly walking through the center of town and ultimately holding a final celebration at University Square. Sociologist Mihaela Biolan says that is real progress: "Society is more accepting than it was 10 years ago, and more than last year. It is an exponential process," as she told DW. The number of people who now actively support such diversity has also grown. "We wholeheartedly thank those who continue to be bitterly opposed to the idea. They have only created more supporters for us," adds the sociologist. 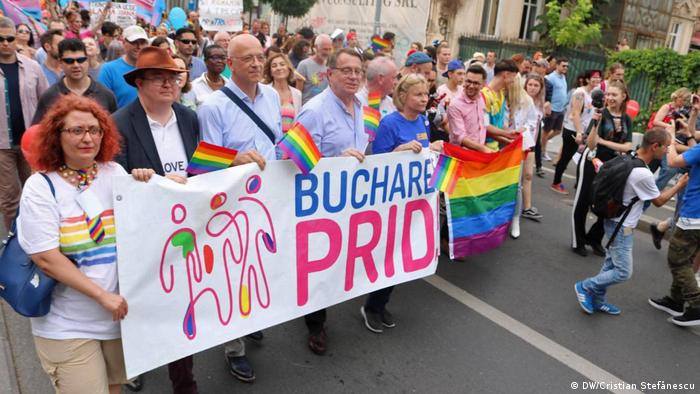 Biolan, Brummell and Meier-Klodt (l. to r. at front) opened the parade

"Diversity among people is a treasure for every society," explains the United Kingdom's ambassador in Bucharest, Paul Brummell. He had the privilege of opening this year's pride parade alongside Angela Cristea, head of the European Commission's representation in Romania and German Ambassador Cord Meier-Klodt. Speaking with DW, Meier-Klodt emphasized that the march was not against the rights or interests of others but rather for the rights of all. For tolerance, diversity and European rights. "People have different life models. By respecting the rights of minority groups, we respect our own rights, the rights of every citizen," says the German diplomat.

"Some people belong to different sexual communities," emphasizes Social Democratic parliamentarian Petre-Florin Manole. But one must not forget that those people are still citizens and have the same rights as others. Unlike the rest of his party, the young parliamentarian recently spoke out against holding a referendum on banning same-sex marriage in Romania. Manole is convinced that Romania's parliament will pass a law legalizing civil partnerships for same-sex couples before upcoming European elections in 2019.