The old West Germany had "a latent incompatibility between its national aims and its Atlantic ties," former US top diplomat Henry Kissinger once said. Donald Trump seems to miss those times, says DW's Miodrag Soric. 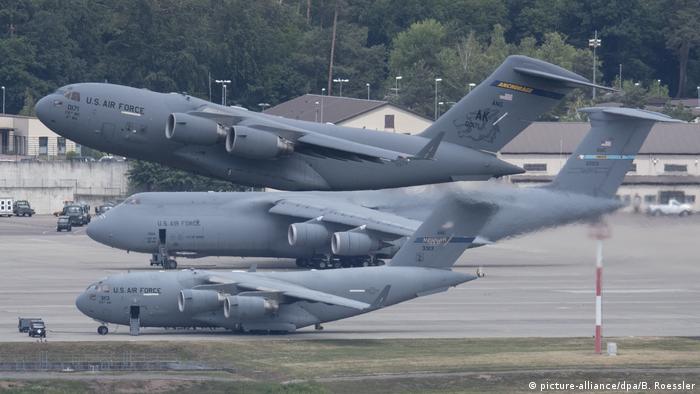 Can Germany have and pursue its own interests? The answer from Washington seems clear: only with the blessing of the US government. The US is threatening to impose sanctions on European companies involved in completing the Nord Stream 2 pipeline.  This pipeline, which is now 96% finished, is designed to transport natural gas along the bottom of the Baltic Sea from Russia to Germany, bypassing all other countries, and from there on to other EU states.

Germany depends on exports and its industry needs energy security. That is why German businesses and the government are backing the construction of the pipeline. But Berlin is also trying to take into consideration the reservations certain countries — in particular, Poland and Ukraine  — have expressed about the project.

Read more: Observers sceptical over reports on planned US troop withdrawal from Germany

The White House couldn't care less about all this, however. President Trump is determined to stop this pipeline no matter what it takes.

One of the people egging him on is Richard Grenell, the former US ambassador to Berlin. This rather undiplomatic diplomat has now at last made a significant contribution to bilateral relations: He resigned on June 1 and left Germany.

Ted Cruz, the ultra-right Republican senator from Texas, is also an outspoken opponent of the pipeline. This is a man who is called the "devil incarnate" by some of his fellow party members. Others say that if Cruz were lying seriously injured in Congress, nobody would call 911.

Cruz has for years been sponsored by the American fracking industry. That industry, in turn, would like to sell its gas in Europe. The problem is that the American gas, which is produced at great operating expense, is more expensive than the Russian gas.

Read more: Opinion: Trump is playing election games with US troops in Germany

But in this case, Washington —  that former staunch advocate of the free market economy — is turning away from the idea of competition. It is easier to threaten sanctions, a type of politics that Trump calls "America first." But by so doing, he risks damaging relations with one of his most loyal allies.

In public, he praises German Chancellor Angela Merkel. But the media and government representatives hint that there have been heated talks between the two. The chancellor is cut of a different cloth than the Montenegrin head of government, whom the US president could simply push aside when he stood in the way. He can't treat Merkel like that. She won't be intimidated, which seems to irk Trump a lot.

Withdrawal of almost a third of the contingent

Now he wants to punish her for her insubordination by withdrawing almost 10,000 US soldiers from Germany this year. Most Germans couldn't be bothered as long as the country is not exposed to any military threat from the outside. After all, the noise and environmental pollution caused by the troops has prompted criticism for years. The mayors and business representatives in the places where the troops are stationed are the only ones who are really concerned about the withdrawal.

Above all, however, the Americans are in Germany because it is in their own interest — all Iraq and Afghanistan missions are controlled from German soil — and in the interest of NATO. If Trump withdraws a sizable contingent, he will primarily harm the US and alienate the country even more from Europe.

And China will be the one to benefit. Every dispute among Western nations strengthens Beijing's hand against Washington. With behavior like this, the Americans can hardly count on EU support in the trade dispute with China — quite the contrary. Berlin takes over the presidency of the Council of the European Union in July. Merkel is still planning a meeting at some stage of all EU heads of state and government with China's President Xi Jinping, even if the original date scheduled for mid-September has been canceled because of the coronavirus pandemic.

Such a meeting held just before the US presidential elections would, of course, be a diplomatic provocation. Trump would not be invited. He could only tweet about it as an observer.

If his administration is voted out of office in November, relations between the US and Germany should quickly return to normal. Democratic challenger Joe Biden understands that Germany, too, has its own interests and is allowed to pursue them.

Germans using too much gas, could face emergency later authorities warn 2h ago

Joe Biden pardons anyone convicted of marijuana possession 3h ago