The EU lent Greece the funds to keep it from bankruptcy. Austerity was a harsh process that was often unfair — but lenders saw no real alternative. Tuesday marks the start of a new experiment, DW's Bernd Riegert writes. 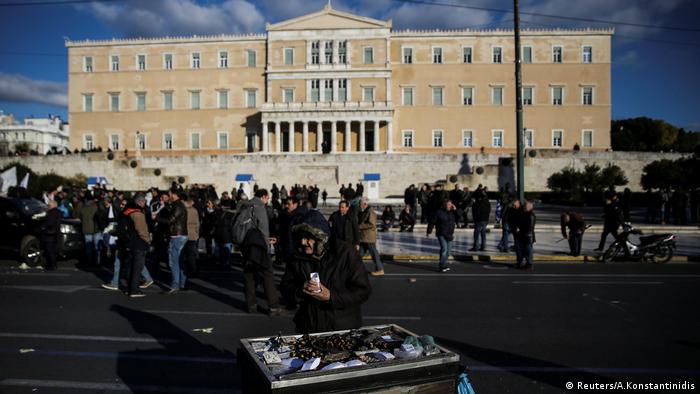 Despite all the mistakes that were made and all the hardships that the Greek people have had to endure, the country's return to profitability is a success for the EU — and for the states that use the euro in particular.

In 2010, when it became apparent that excessive deficits, wages and public debt had left the Greek state on the verge of bankruptcy, the EU and International Monetary Fund (IMF) offered loans. They didn't have to. The EU's treaties specifically exclude bailouts. An agreement was reached to lend Greece money at extremely favorable conditions to enable it to continue to meet its obligations, such as paying state wages and pensions.

Naturally, eurozone countries were not solely motivated by solidarity. Self-interest was also part of it: The deal also ensured that banks in Germany, France and Spain weren't bankrupted and dragged into the abyss along with Greece. But the eurozone countries and the IMF could have acted differently. They could have listened to all the prophets of doom who maintained that the attempt to rescue Greece would never succeed.

It would not have been possible to restore Greece to financial health without imposing very strict constraints. The country had to drastically reduce its excessive expenditures. People had to go without being paid. The economy shrank. All these hardships were unavoidable because things could not have continued as they were: a life lived on credit. With hindsight, however, the cuts should have been structured to be more bearable for society.

These constraints were also necessary to force the government and the economy to make cuts to public programs. All the critics who claim that the creditors "economized the country to death" are wrong. Without the restructuring measures, Greece would have gone nowhere fast. It would have been totally finished: thrown out of the eurozone, completely cut off from any source of finance.

Now reveling in his role as the man who liberated Greece from the yoke of its creditors, Prime Minister Alexis Tsipras grasped this pretty quickly. For a few months, he and Yanis Varoufakis, the early finance minister in the Syriza government, rebeled against the financiers. In 2015 Tsipras led the country to the brink of insolvency. Then, after staring into the abyss, he did an about-face and enacted austerity measures harsher than any that had come before. He raised taxes and, at the same time, reversed reforms. Overall he fell in line with the recovery course set by the eurozone countries, and is now selling this as his own victory. Quite why the Greeks are buying this remains a mystery.

Things are slowly improving. Not because of the ideas of the coalition government of left- and right-wing parties in Athens, but because of the considered rescue course laid down by the European Union.

Starting Tuesday, Greece must stand alone again on the financial markets and try to borrow money at tolerable rates of interest. This can only work if every Greek government from this time forward maintains strict fiscal discipline and makes the country more competitive. Greece's second chance has been hard-earned. It must not be squandered.

The rescue and rehabilitation program extends well into the future. Financial and fiscal goals have been set into 2032 and beyond. The most recent loans won't be paid off until 2060. IMF functionaries doubt that Greece will manage to hold out that long. The European Commission's prognoses, on the other hand, are very optimistic.

Savers in the eurozone are compelled to show solidarity by way of the European Central Bank. The ECB's zero-interest policy, which has provided countries such as Greece with cheap credit, is financed in part by the creeping devaluation of monetary assets in the north. This must now slowly be reversed.

The European Union's solidarity must continue. The EU has also learned from Greece. A bailout fund has now been contractually established and provided with sufficient capital. Procedures now work more smoothly. The European Union is better equipped to deal with the next crisis. Despite the death knells being rung by those who have an interest in seeing its demise, the European Union will deliver. If the governments of Poland, Italy or likeminded leaders elsewhere get to set the tone in the European Union, it'll be good night for countries such as Greece. With their emphasis on "my country first," Italian Deputy Prime Minister Matteo Salvini and Austrian Vice Chancellor Heinz-Christian Strache certainly would not help the Greeks.

Germany vows 'zero tolerance' for attacks on synagogues 2h ago