The threat of Grexit returns to haunt EU | Business| Economy and finance news from a German perspective | DW | 13.02.2017

Crisis-plagued Greece has come quite close to being kicked out of the eurozone several times, before last-minute deals averting such an outcome. But amid growing populism in Europe, it could be different this time round. 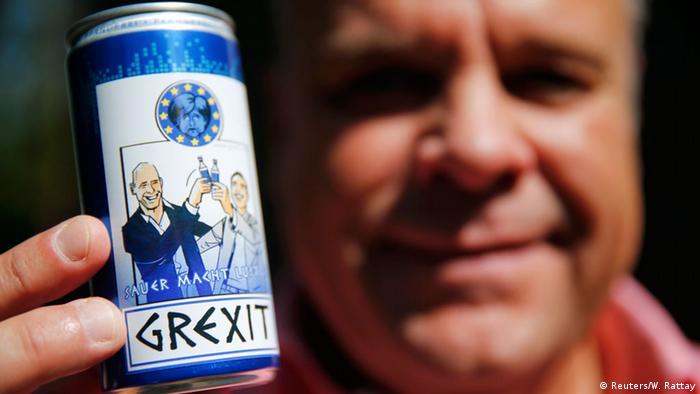 The same sequence of events keeps playing again and again in the years-long Greek economic saga: the grossly indebted southern European country runs out of money; it faces bankruptcy and the threat of being ejected from the monetary union. Greek government representatives and creditors implore, threaten and quarrel until the last minute - in the end, however, the creditors agree to offer assistance to Athens.

The last time this played out was in the summer of 2015 when Greece was sanctioned its third aid package worth 86 billion euros ($91.2 billion). The program will run until 2018, but the assistance is delivered in individual tranches, the payment of which hinges on Greece's progress in slashing government spending and implementing structural reforms. But herein lies the hitch.

This summer, Greek debt repayments amounting to more than 6 billion euros will be due. Athens will be in a position to honor these commitments only if it receives the next tranche of aid from its creditors. But whether or not that happens is more unclear this time around.

Two things are fundamentally different today. Unlike in the previous rounds, the International Monetary Fund (IMF) is not party to Greece's current bailout, and says it will not participate in it until there is a credible plan to cut the financially troubled nation's large debt burden. "We do not believe that the debt burden for Greece is viable," says Poul Thomsen, director of the IMF's Europe Department. In other words, the IMF sets a precondition for its participation and that is it wants the creditor nations to grant some debt relief to Greece.

That would force other eurozone nations to take a hit by writing down their holdings of Greek debt. But there is a problem with that, and it is also the second aspect that's different today than in the past: the political climate in Europe has changed dramatically.

Across the Continent, right-wing parties campaigning against the EU and the euro are on the ascendant. In the coming months, national elections are set to take place in key EU nations, including France and Germany.

In France, the eurozone's second-biggest economy, presidential candidate Marine Le Pen has expressed her desire to pull the country out of the euro should she win the presidency.

Populist pressures are also on the rise in Germany, where many are already of the view that the federal government in Berlin has been squandering tax money without limit.

Markus Will, an economist from the University of St. Gallen in Switzerland, told DW that "it's difficult to find a solution before the elections in France and Germany."

Wolfgang Schäuble, Germany's finance minister, has appeared to take a tough line on Greece, demanding the country to steadfastly execute the reform and austerity measures agreed with its creditors. Otherwise, Athens could not remain in the monetary union, Schäuble reckoned.

There are conflicting reports about how much progress was made during the latest round of negotiations on Greece's debt. But the prime minister has warned that his country is already worn down by six years of austerity. (11.02.2017)

Finance Minister Euclid Tsakalotos has said an IMF report on the Greek economy 'fails to do justice' to the country's potential. The Athens government remains deadlocked with lenders over its multibillion debt bailout. (08.02.2017)

There are also calls from some in the creditor countries for Greece's exit from the monetary union, arguing that it would minimize the losses for the people in these nations.

But not everyone is fond of seeing Greece leave the eurozone. Martin Schulz, a candidate for the German chancellery and former president of the European Parliament, told "Die Welt" newspaper: "Those in favor of Grexit are playing with the unity of the continent. It is perhaps in the interest of Donald Trump or Marine Le Pen. But it is certainly not in the interest of Germany or Europe."

Meanwhile, talking to German radio station "Deutschlandfunk," EU Commission President Jean-Claude Juncker recently praised the Greeks for their readiness to carry out reforms. "No country has managed to achieve what Greece has done in terms of improving its competitiveness," he said.

Greek Prime Minister Alexis Tsipras would definitely like to hear more such statements. He has already requested German Chancellor Angela Merkel to rein in her finance minister and his seemingly "aggressive" rhetoric vis-à-vis Greece.

Tsipras also faces an angry electorate at home, people who have had to endure economic recession, drastic cuts in public spending and an exceedingly high unemployment rate, among other things, in recent years.

When Tsipras took over power two years ago, it sparked immense concern among the creditors as he had previously rejected all the austerity measures imposed on Greece in exchange for the bailouts.

Nevertheless, the Greek leader has since shifted his stance, putting in place an array of reform measures, including the recent round of tax increases that took effect on January 1.

It's unsurprising, though, that the steps have cost the young leader his popularity with the public. Angry Greeks thronging the streets to protest against the measures has become a staple of daily life.

Surveys show that the center-right opposition party, New Democracy (ND), is now more popular than Tsipras' Syriza. On Monday, ND's leader Kyriakos Mitsotakis met with German Chancellor Angela Merkel in Berlin, and he too called for further debt relief for the troubled nation.

The main bone of contention among various actors involved in the debt talks centers on the debt-laden nation's target for primary surplus, the amount of budget surplus Greece has to produce before debt repayments.

Whereas the eurozone creditors insist on a target of 3.5 percent of Greek GDP, many, including Greece's government and the IMF, say it's not feasible.

"You will find very few experts who say this [the 3.5 percent target] is achievable," said opposition leader Mitsotakis, adding that he personally believes a 2-percent surplus might be possible.

Greece will have to execute further structural reforms like modernizing its pension system, said economist Markus Will. But, he warns, "Without granting debt relief, the Greeks won't be able to return to a healthy growth path."

This view is shared by many other experts, including the IMF. Perhaps even the finance ministers of Germany, France and the Netherlands share this opinion. Nonetheless, it's just bad luck for Greece that none of them is in a position to appear to their respective electorates as being lenient towards Athens.

"The latest episode of the Greek tragedy comes at the worst possible time," says Michael Every, an economist at the Netherlands-based Rabobank.

Brexit: EU's Barnier unsure on liklihood of reaching a deal