Greece's parliament has adopted further reforms demanded by the country's international creditors in return for more bailout funding. Thousands of people marched in central Athens to protest against the sweeping bill. 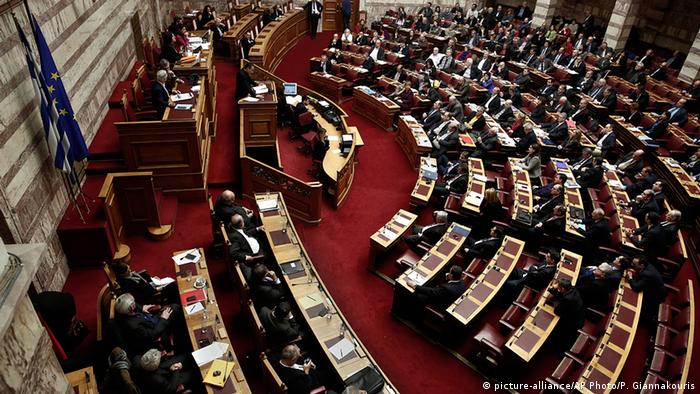 Greek lawmakers voted early Saturday 154-144 to pass the legislation required to unlock a tranche of loans worth 2 billion euros ($2.3 billion). The instalment is part of a bailout agreement with eurozone lenders, under which Athens must implement public spending cuts and tax hikes in order to receive 86 billion euros over three years.

The single-chamber parliament only narrowly adopted the new measures after a heated debate which ended in all six opposition parties voting against the bill. Getting the reforms approved was widely seen as a test for leftwing Prime Minister Alexis Tsipras, who was re-elected following snap polls last month.

Conservative leader Vangelis Meimarakis accused the government of clobbering the country with taxes that he said would prolong a recession. However, Tsipras told opposition lawmakers the legislation should come as no surprise.

"There are no new measures here. There are difficult measures that we all knew about," he said. "You already knew them when you voted in favor of the July 13 (debt) accord" with the European Union.

Tsipras was first elected in January on an anti-austerity campaign platform, but later caved in to requests from lenders - the International Monetary Fund, the European Central Bank and the EU Commission - to implement tough cost-cutting reforms in exchange for much-needed funds.

The bailout deal struck with creditors in July stopped debt-laden Greece from crashing out of the eurozone. It also alienated a large section of Tsipras' radical left Syriza party who were strongly against further austerity. The rift forced him to call an early election last month, which resulted in Syriza forming a government with a coalition partner, the nationalist Independent Greeks.

As parliament convened on Friday, several thousand protesters gathered in central Athens to voice their opposition to the bill. The cost of the reforms, as well as the ongoing controls on money transfers in the country, are expected to keep Greece in recession for at least the next two years.

German lawmakers have voted in favor of a new bailout package for Greece, clearing a major hurdle for providing billions of euros in fresh financial aid to Athens. What's next for the cash-strapped eurozone country? (19.08.2015)