India and Pakistan can afford to buy weapons and test ballistic missiles, but they can't cope with the COVID crisis. DW's Shamil Shams says it is time for both to invest in public health and focus less on warmongering. 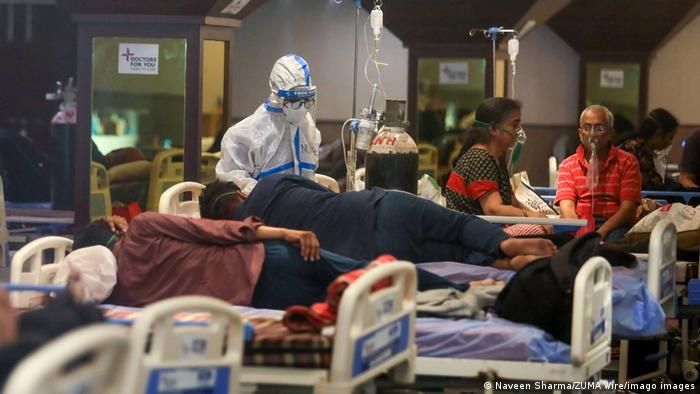 Dr. Mubarak Ali, a progressive Pakistani historian, recently wrote on social media that the mishandling of the coronavirus pandemic in India and Pakistan proves that "oxygen is more important than uranium."

Both India and Pakistan are grappling with an acute public health crisis brought on by coronavirus. India lacks oxygen for COVID patients, and Pakistan can't afford to buy vaccines.

However, both nuclear-armed states continue to devote a large chunk of their national budgets to military spending.

The pandemic situation in India is nightmarish. During the week following April 18, India reported 2.24 million new cases, the highest number recorded by any country in a seven-day period since the pandemic began.

India also logged 16,257 deaths, almost double the 8,588 deaths recorded the previous week, according to Health Ministry data. Since the start of the pandemic last year, India has registered over 17.6 million COVID cases and almost 200,000 related deaths.

This "second wave" is particularly lethal and has exposed the fragility of India's health infrastructure. Hospitals are overwhelmed with COVID patients, and there aren't enough places to cremate or bury the dead.

The situation is Pakistan is getting worse by the day. Infections and deaths are surging.

As of Tuesday, April 27, Pakistan has recorded almost 805,000 COVID cases and 17,329 deaths. Experts say the actual numbers are likely much higher.

The vaccine rollout has been quite slow in Pakistan because the government doesn't have the funding to purchase doses. China and other countries have donated a few million vaccine doses, but it is not enough to vaccinate a country of 220 million people.

Yet, the ruling classes in India and Pakistan are not ready to reevaluate their public spending policies.

For over 70 years since both countries gained independence from British rule, India and Pakistan have invested more in defense than in the wellbeing of their people.

Their militaries have thrived, even as a large segment of their populations have fallen below the poverty line.

This is what happens when a developing county prioritizes security-based national spending. India and Pakistan have the latest tanks and fighter jets, yet their hospitals lack ICU beds and ventilators.

The coronavirus is out of control in India and Pakistan because civil administrations don't have the capacity to deal with it.

After all, how could health bodies tackle a once-in-a-generation pandemic when their governments have not invested sufficiently in strengthening health infrastructure in seven decades?

In Pakistan, the indifference of the country's rulers to the plight of the general public was made evident when they tested a nuclear-capable missile on March 25, while at the same time telling people they would have to wait for vaccines.

Imagine how many vaccine doses could have been purchased for the price of one Shaheen-1A ballistic missile.

At the same time, India's military is set for a high-tech upgrade over the next two years.

Even the world's most developed health care systems have been pushed to the edge by the coronavirus pandemic. And for developing countries, the pandemic has demonstrated the necessity of a functional health care system for prosperity.

Therefore, India and Pakistan can no longer justify supporting a nuclear arsenal while their populations suffer due to a lack of medicines, oxygen cylinders and hospitals.

The rulers of the two nations must put an end to their warmongering and resolve their disputes politically and diplomatically. The best way to deal with COVID – and potential pandemics in the future – is through regional cooperation.

The way many Pakistanis have offered support to Indians during their health crisis is proof that the two nations can overcome many challenges if they help each other.

The pandemic has demonstrated that if the arch-rival south Asian neighbors don't move toward reconciliation and peace, their economies are bound to collapse in the long run, and even their mighty armies will not be able to stop it.

Opinion: India's COVID-19 policy was a disaster waiting to happen

Epstein associate Ghislaine Maxwell to be sentenced 4h ago

Opinion: Can the West wean India off Russia's influence? 3h ago