COVID: Pakistan comes under fire for holding Republic Day military parade | Asia | An in-depth look at news from across the continent | DW | 25.03.2021

Pakistan held a pompous ceremony to show off its military strength at a time when the government lacks funds to procure COVID-19 vaccines and as the Sputnik V doses go on sale at a steep price in the country. 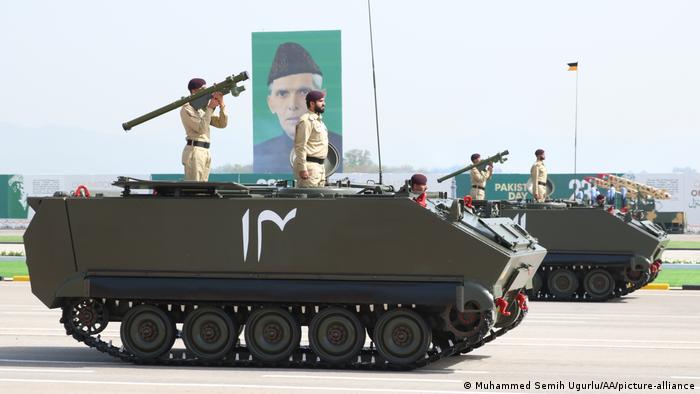 Pakistan held its Republic Day parade on Thursday — two days later than initially planned — exhibiting its military might in a grand official ceremony.

The colorful event saw troops parading in Islamabad, the army showcasing long-range missiles, and the air force flying fighter jets over the capital.

Every year, Pakistan commemorates Republic Day (also called Pakistan Day) on March 23, but this year the authorities postponed it for two days due to bad weather.

The focus of the official Republic Day ceremonies is the exhibition of the South Asian country's military strength. President Arif Alvi and army chief Qamar Bajwa received a guard of honor from military troops.

"We will defend our independence at all costs," Alvi said, adding that Pakistan desired peace, security and development in the whole region.

"Pakistan wants to move forward with good intent and peace, but our desire for peace should not be construed as our weakness," he added.

Prime Minister Imran Khan did not participate in the main ceremony as he is currently in quarantine after contracting the coronavirus. 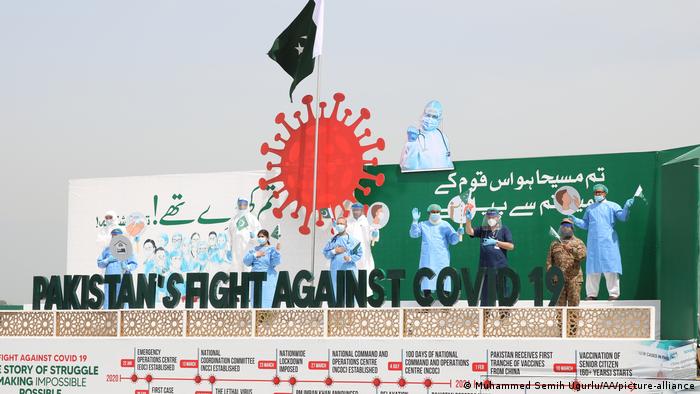 The military parade on Thursday was dubbed "unnecessary" by many people in the country, as Pakistan is currently facing a dire economic situation due to the pandemic. Coronavirus cases are once again on the rise in the country, and the government says it does not have enough funds to purchase COVID vaccines.

Pakistan is also one of the few countries in the world that have approved the commercial sale of COVID vaccines.

According to unconfirmed estimates, the Republic Day military parade cost billions of rupees (millions of euros). DW contacted Kamran Ali Afzal, a spokesman for the Ministry of Finance, to find out the exact figure but did not receive any response.

The military parade proves that the government's priorities are flawed, experts say.

"Military strength without economic stability is hollow. Wars are fought with tanks, fighter planes and warships, which need fuel that is bought with money. For this we need a strong economy," Kaiser Bengali, an economist, told DW.

Health experts are also wary of a "third coronavirus wave" in the country and question the government's decision to hold a public gathering to commemorate Republic Day.

"The Republic Day public gathering can spread the virus even more. At least the government should not have held a public ceremony. All such events should be avoided until 75% of the population is vaccinated," Qaiser Sajjad, secretary-general of the Pakistan Medical Association, told DW.

Burzine Waghmar, from the Center for the Study of Pakistan at the School of Oriental and African Studies in London, says that "responsive, responsible and truly representative governments take cognizance of their citizen's sentiments when convening national events during the pandemic."

"A year since the start of the COVID-19 pandemic, nothing remotely encouraging has been undertaken by PM Imran Khan, whose leadership has been, in a word, underwhelming," Waghmar told DW.

The Muslim-majority country has so far recorded around 641,000 COVID cases and around 14,000 related deaths. From less than 900 cases a day in mid-February, Pakistan is currently seeing close to 4,000 cases on a daily basis. Experts say the actual number could be much higher as many cases go unreported in the country.

But the government insists that the show of military strength is necessary in the face of security threats posed by regional rival India.

"These events show our military capabilities in response to India's aggression. We want to show that we are ready to deal with it," Amjad Shoaib, a retired army general and defense analyst, told DW.

Shoaib disagrees: "The parade boosts public morale. At the same time, we want to give a message that Pakistan wants peace through dialogue in the region."