COVID: Indian hospitals overwhelmed by new virus wave | Asia | An in-depth look at news from across the continent | DW | 20.04.2021

India is in the middle of a second deadly wave of coronavirus infections, with the number of new infections skyrocketing in recent days. The medical response is hampered by shortages of oxygen, drugs and hospital beds. 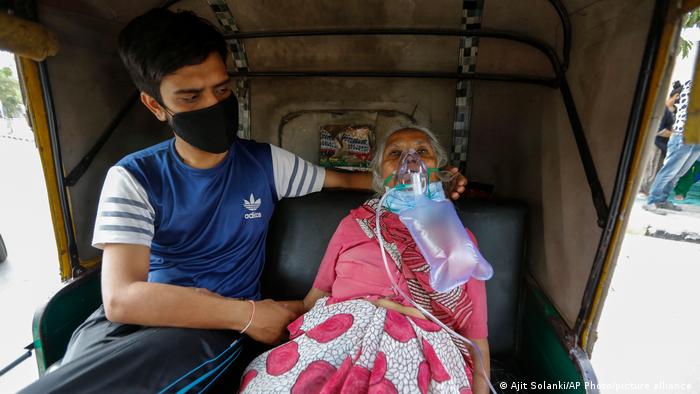 India is currently facing the world's worst surge in coronavirus infections, reporting about one in three of all newly confirmed COVID cases worldwide over the past few days.

On Tuesday, the Indian Health Ministry reported 259,170 new infections, more than any other country.

India has also reported daily infections above the 200,000 mark for six days. The country reported 1,761 COVID-related deaths over the past 24 hours, its highest daily toll thus far.

Large parts of the country are now under lockdown, and hospitals in many states have been reporting a shortage of beds, oxygen and medicines.

"Given the rising infections, we have to increase bed capacity and oxygen supply. This wave is bad and it is a very serious situation," B L Sherwal, medical director of the Rajiv Gandhi Super Speciality Hospital, told DW.

Lack of hospital beds and oxygen

People in many places are putting out desperate calls for help on Twitter, asking for assistance getting their families into hospitals.

Delhi, the capital city which has seen a surge in cases, began a six-day lockdown late on Monday that officials hope will slow the virus transmission and relieve the pressure on the health infrastructure.

Delhi's chief minister, Arvind Kejriwal, said his government is facing an uphill battle in providing facilities and oxygen to those in need.

"If 25,000 patients come every day, then the system will crumble. There is a shortage of beds. Oxygen has become an emergency in Delhi," Kejriwal said, while announcing a lockdown set to last until April 26.

The chief minister has asked authorities to ensure an uninterrupted supply of about 700 metric tons of oxygen to hospitals and treatment centers on a daily basis.

The state health department has now appointed special officers to monitor its overall procurement process and ensure that oxygen is being supplied to various hospitals and nursing homes.

"It is a dystopian nightmare. We are doing our best to provide care, but this time we have been stretched. Patients are taking oxygen sitting in the open in the absence of beds," a doctor at a government hospital told DW.

"It is a serious situation. Delhi's positivity rate has also continued its upward trend, with 30% of the COVID tests conducted returning a positive result. Over the weekend, this figure was around 24%," he told DW.

Infrastructure and personnel under pressure

According to Fitch Solutions, a data research agency, with just over an average of eight hospital beds and eight physicians per 10,000 people, India's healthcare sector is not well-equipped for such a crisis.

"The significant inefficiency, dysfunction and acute shortage of healthcare delivery systems in the public sector do not meet the growing needs of the population," the agency said.

It also pointed out that the health infrastructure of states like Maharashtra, Delhi, Tamil Nadu, Punjab and Karnataka have already been overwhelmed by the health emergency.

Furthermore, the exponential rise in infections means diagnostics firms testing for coronavirus are nearing breaking point in many cities.

Scarcity of testing kits and the huge workload at both private and government laboratories are putting infrastructure and personnel under severe pressure.

"This has affected hospital admission and timely treatment and is contributing to the cumulative increase in fatality rates," M C Mishra, former medical superintendent of the All India Institute of Medical Sciences, told DW.

India, the world's second most populous country with over 1.3 billion people, is grappling with a new public health emergency after it lowered its guard when coronavirus infections fell to a multi-month low in February, health experts and officials say.

Total coronavirus cases in India are now at 15.32 million, second only to the United States.

India has so far lost 180,530 people to COVID, but experts warn that the official death toll does not reflect reality, and that it could sharply rise.

To control the pandemic, the federal government decided to expand vaccine coverage, announcing on Monday that vaccinations will be made available for all citizens aged over 18 from May 1.

"India is vaccinating people at world record pace and we will continue this with even greater momentum," Prime Minister Narender Modi said on Monday.