COVID: India faces vaccine shortage amid surge in new cases | Asia | An in-depth look at news from across the continent | DW | 13.04.2021

India is grappling with a shortage of vaccines as a new wave of infections grips the country. Several states and vaccination centers have reported an unfulfillable demand. 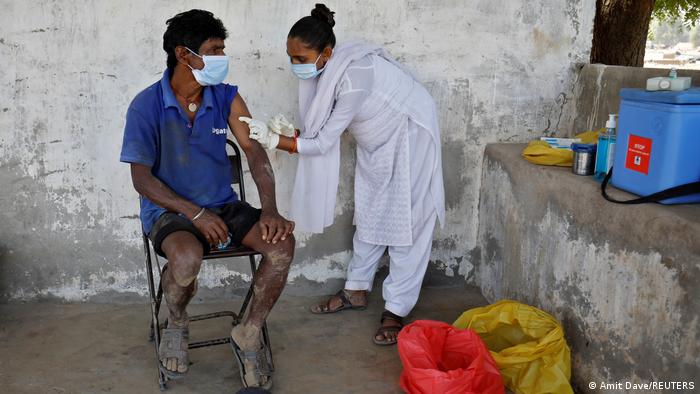 A person receives a dose of the Covishield vaccine in Ahmedabad, India

Several states have reported shortages of coronavirus vaccines as the number of cases in India has passed Brazil's tally, making it the country with the second-highest number of infections in the world.

The second wave of infections is wreaking havoc in India, with health officials reporting 161,736 cases in 24 hours, bringing the number of infections above 13.6 million, according to Health Ministry data. The death toll has risen to over 171,000, and the country now accounts for one in every six daily new infections worldwide.

"India seems to need more vaccines than it has, with vaccination centers and state governments announcing shortfalls, and is unlikely to reach its desired scale anytime soon," MC Mishra, former director of the All India Institute of Medical Sciences, told DW.

With the ongoing surge, Russia's Sputnik V vaccine was cleared for emergency use by the national drug regulator, the Drugs Controller General of India, on Tuesday.

At 91.6%, Sputnik V, which is manufactured in India by Dr. Reddy's labs, has the highest effectiveness, after the Moderna and BioNTech-Pfizer shots. Dr. Reddy's had applied on February 19 for emergency use of the vaccine, which is in Phase 3 of clinical trials in India.

It will now be the third vaccine to be cleared for use after Oxford-AstraZeneca vaccine, made by the Pune-based Serum Institute of India (SII), and another, Covaxin, developed by the Hyderabad-based Bharat Biotech.

The Serum Institute, the world's largest vaccine maker by volume, had agreed to produce 1.1 billion doses of the AstraZeneca vaccine — known in India as Covishield — for delivery. So far, more than 104.5 million people in the country have received at least one dose of the inoculation.

Health officials are concerned that, despite the spike in cases, certain states have indicated that just over five days of vaccine stocks are currently remaining, while another week of supplies is in the pipeline.

One of the most affected states is Maharashtra, which is actively mulling a lockdown. The western state recorded over 51,000 fresh cases on Monday.

Supplies to be exhausted within days

"There are 108 vaccine centers in Mumbai, but most of them have been closed due to a lack of vaccines. We are leading the vaccination drive but not getting enough doses," Maharashtra Health Minister Rajesh Tope told DW.

He said the state's stock of 1.67 million doses of Covaxin and Covishield would be exhausted within a few days. Even Pune, one of the biggest cities in the state, is running low on vaccines, he said.

In states such as Andhra Pradesh and Bihar, current stocks will run out within less than two days, while in Odisha there are barely enough vaccine supplies to last for four days.

Punjab Chief Minister Amarinder Singh said the state was not in a position to ramp up inoculations because of the limited supply.

Meanwhile, the hill state of Uttarakhand carried out just 519 vaccinations over the weekend.

"The Modi government has mismanaged the situation, exported vaccines and allowed a shortage to be created in India," opposition Congress Party president Sonia Gandhi said during a special meeting over the weekend to address the COVID-19 crisis.

India's government has played down the shortages. During his virtual meeting with chief ministers, Prime Minister Narendra Modi said administration of the vaccines will have to be prioritized due to a limited supply, and lamented that some people were playing politics on the issue.

"I have faced much criticism, but we remain committed to serving the people," he said.

Experts say the government failed to anticipate a higher demand for vaccinations when it opened up its first drive. Officials also did not take into account the vaccines that the country had shipped out through its ambitious "Vaccine Maitri," or "vaccine friendship," initiative with other countries.

India has shipped more than 60 million doses to 76 nations, delivered either under the World Health Organization-backed COVAX mechanism or as part of commercial deals.

Of the countries that received India-made vaccines, at least 37 got them for free — 17 of them through COVAX, under the aegis of the Global Alliance for Vaccines and Immunization (GAVI).  Both major vaccine producers in India still have commercial obligations and huge pending orders.

"The tangible costs of the nonavailability of vaccines at home far outweigh the non-tangible benefits of vaccine diplomacy. We should have ensured better use domestically," the international relations expert Happymon Jacob told DW.

Production unable to keep up with demand

Production capacity has been unable to keep up with the recent spike in demand for the vaccines.

Officials told DW that the government had decided to stop the direct grant of COVID-19 vaccines to other countries until the supply of vaccines for domestic requirements reaches a favorable level.

"We need to ramp up our production capacity. That is our immediate objective, and we are working towards that," a senior official in India's Foreign Ministry told DW.

The SII, which is the primary provider of India's vaccines, is currently producing 2.1 million doses every day. The total production capacity of the manufacturers of Covishield and Covaxin, the two local players, is roughly 2.4 million doses a day. However, the current demand stands at 3.7 million vaccines per day.

In an interview last week, SII CEO Adar Poonawalla said his company was working overtime to produce the incoulations. He admitted that production capacity was "very stressed," and that his company was seeking 30 billion Indian rupees (€334 million, $399 million) to ramp up production.

"The globe needs this vaccine. We are prioritizing the needs of India but we are still short of being able to supply every Indian," Poonawalla said.