The new figure brings the total to over 14 million infections since the start of the pandemic. Meanwhile, officials are mulling a cancellation of the Tokyo Olympics. Follow DW for the latest. 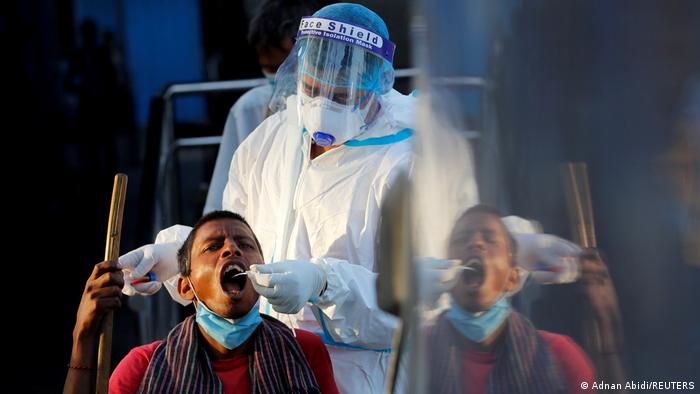 India reported more than 200,000 new coronavirus cases on Thursday, bringing the total number of infections in the country above 14 million. The new figures come as the nation battles a new surge in cases, which has seen record infection counts.

In the capital, New Delhi, more than a dozen hotels and wedding banquet halls were ordered to be converted into COVID-19 centers attached to hospitals.

Meanwhile, in Mumbai, residents dealt with a new set of lockdown measures to curb the spread of the virus. The action, imposed by the worst-hit Maharashtra state on Wednesday, shut most businesses and public places, and limits the movement of people for 15 days.

In addition to the 200,739 new cases of infection, the Health Ministry also reported 1,038 fatalities from COVID-19 in the past 24 hours, bringing the number of fatalities to 173,123. India's total cases are second behind the United States and its deaths are fourth behind the US, Brazil and Mexico.

Here's a roundup of some other noteworthy COVID-related stories around the world.

According to reports emerging from Japan early on Thursday, an official from the governing party has said that canceling the delayed Olympic Games — now less than 100 days from the start as it stands — could be an option.

Kyodo news agency reported the news, quoting a television interview with the secretary-general of the Liberal Democratic Party, Toshihiro Nikai. If rising COVID caseloads meant that "it is said to be impossible, we would have to give up," Kyodo quoted him as saying.

Cambodia's capital Phnom Penh started its first full lockdown on Thursday, as it faces its worst outbreak yet. The government order, which also applies to the neighboring district of Takhmao, was delivered at midnight and came after rumors of an impending lockdown sparked a run on local markets and stores. The restrictions will apply for two weeks.

The COVID-19 death toll in Bangladesh hit 10,000 on Thursday after the government announced 94 new deaths in the past 24 hours.

The country entered an eight-day lockdown on Wednesday as it battled to curb a recent surge in infections.

In hard-hit  Brazil, which hosted the 2016 Summer Games, the Christ the Redeemer statue was illuminated in the country's vivid yellow-and-green colors, marking 100 days until the Olympics.

Other words in Portuguese such as "discipline," "respect," "focus," and "courage" were also projected onto the statue overlooking Rio de Janeiro. 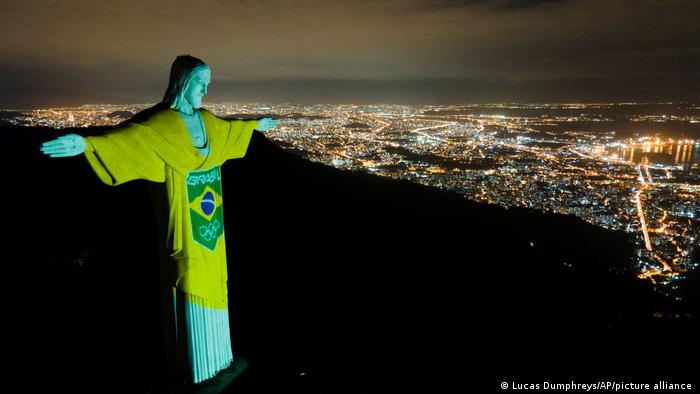 In a more normal year, the Olympic torch would be on its way from Rio to Tokyo ahead of the Games. But this year, owing to the pandemic, the torch ceremony is taking place in Japan only.

Argentina implemented tougher pandemic restrictions in and around the capital Buenos Aires to try to curb a spike in cases. The measures including shutting schools and implementing an overnight curfew to limit social activity.

The New York Philharmonic gave its first public performance in 13 months on Wednesday night. "On behalf of all us on stage, welcome back,'' the conductor told
the crowd. "We have been dreaming of this moment for a long time.''

There was a reduced force of 23 strings, and no brass or woodwinds for a program that lasted one hour. The last time the Philharmonic had gathered before an audience was on March 10 last year.

The figures were a marked increase from the previous Thursday, but the RKI noted that testing volumes have dipped fairly sharply over the Easter period.

German health workers, with the new help of family physicians, administered a new record number of vaccines on Wednesday, administering almost 740,000 shots in one day.

That brought the total number of vaccines administered to over 20 million since the rollout began in December — including first and second shots.

Meanwhile, Germany's economic recovery outlook for 2021 was cut on Thursday after five leading economic institutes announced a forecast GDP growth of 3.7%, down one percentage point from autumn's prediction.

The World Health Organization says the proportion of coronavirus-related deaths in Europe among those over the age of 80 has hit its lowest level since the start of the pandemic.

Hans Kluge, WHO regional director for Europe said the trend could possibly be attributed to the rollout of vaccines among high-risk groups.

"Over the past two months the trend among people more than 80 years of age has diverged from the trend seen in every other age group," Kluge told a news conference.

The head of the Africa Centers for Disease Control and Prevention, John Nkengasong, has slammed India's decision to pause the export of AstraZeneca vaccines that are part of the COVAX vaccine sharing program. The move means that Africans who have received their first jab do not know when they will get their second.

"We cannot predict when the second doses will come and that is not good for our vaccination program," Nkengasong said.

A lack of deliveries has left the continent of 1.3 billion people far behind other parts of the world in terms of vaccine rollout. Fewer than 14 million doses have been administered across the continent, with many countries on the point of running out of shots.

As Muslims celebrate the holy month of Ramadan, the World Health Organization (WHO) warned on Wednesday that the pandemic could worsen in the Middle East and North Africa during the month of daytime fasting and evening feasting. Traditionally, people gather for iftar, the breaking of the fast, each evening after abstaining from food and drink during daylight hours.

Ahmed al-Mandhari, the Cairo-based chief of the WHO said a rise in infections and deaths had alreaday been noted in the region in the previous week.

"We are especially worried that the current situation may worsen during Ramadan if people don't follow and adhere to the proven social measures that work," he told an online news conference.

The head of the World Trade Organization (WTO) chaired a meeting on Wednesday seeking to increase production of COVID-19 vaccines and to distribute them more fairly worldwide.

Ngozi Okonjo-Iweala, who took up the job in March, called a closed-door virtual meeting of producers, governments and others, focused in particular on inequitable access to the vaccines. To date, low-income countries have administered well under 1% of the roughly 700 million global doses.

Okonjo-Iweala said in her closing remarks that cross-border supply chain issues, export curbs and personnel shortages had reinforced her view that the WTO should play a central role in pandemic response.