Arab countries are adapting Ramadan traditions to pandemic | Middle East | News and analysis of events in the Arab world | DW | 11.04.2021

Muslim authorities have discussed regulations for online prayers and banning public dinners after sunset as Ramadan begins this week. Many mosques are closed, and vaccines are recommended. 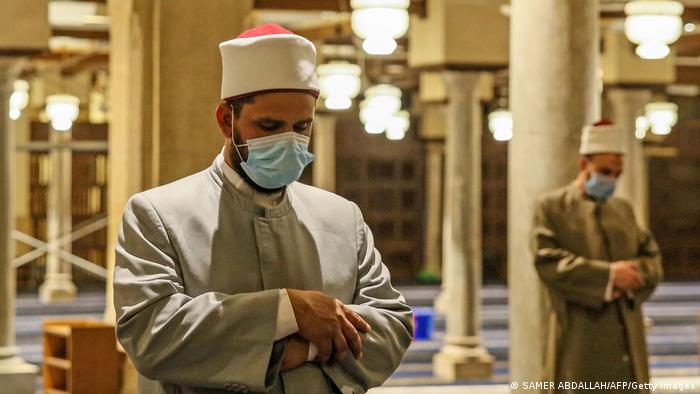 The month of Ramadan begins on Monday for some countries in the Americas and on Tuesday for most of the rest of the world. The exact starting time depends on the visibility of the new crescent moon, with the majority of Muslim countries following Saudi Arabia's sighting of the new moon, which would be on Tuesday.

Ramadan, also spelled Ramazan or Ramzan, is the most important month in the Islamic calendar, when Muslims believe that God revealed the first verses of the Quran to the Prophet Muhammad.

In this second year of the pandemic, regulations for Ramadan have had to be adapted.

To curb the number of infections, most countries have reduced the number of visitors at mosques to 20-30% of their usual capacity. Also wearing masks will be mandatory. In order to further avoid gatherings outside mosques, the traditional meals before sunrise and after sunset, Suhur and Iftar, which were often shared in public Ramadan tents, are banned throughout the region.

This will heavily affect people in need, who often ate for free at the breaking of the fast. Some countries, such as the United Arab Emirates, have promised to organize Iftar meal deliveries for poor people instead.

Consensus among religious authorities is that praying at home is the safest option during the month of Ramadan.

Some prayers may even be streamed. "In Islam, the prayer has two parts. The first part is teaching and preaching by the imam while the believers listen," Sheikh Mohammed Abu Zaid, the chairman of the Sunni Court and imam of the largest mosque in the Lebanese city of Saida, told DW. "This part can be done online," he said. However, the second part, with believers praying together and performing the ritual gathering, "cannot be done online or from a remote place."

Mansour Ali, a lecturer in Islamic studies at the University of Cardiff, told Al-Jazeera that the majority of scholars "deny the validity of any form of virtual congregational prayers." The main reason is that worshippers are required to be held in the same physical space as the imam, or prayer leader.

Clerics in Egypt and Saudi Arabia agree with this differentiation and have issued fatwas, or religious verdicts, stating that online communal prayers are not valid. Their solution is rather "pray at home with loved ones." In turn, a myriad of how-to videos and guides have been published online.

Egypt's Religious Endowments Ministry has provided guidance to officials. Prayers in some mosques will be livestreamed so that worshippers can follow along at home. Religious lectures and sermons will also be broadcast online and through social media platforms.

Curfews and impacts on society

Restrictions and curfews have been either introduced or extended. For example, the Sultanate Kingdom of Oman has just announced a ban on movement of vehicles and people outdoors from 9 p.m. to 4 a.m. during Ramadan, as well as banning commercial activities altogether. Morocco has extended the existing curfew from 8 p.m. to 6 a.m., while in Turkey, curfews will be limited to weekends. In Iraq, a partial curfew will take place during the week from 9 p.m. to 5 a.m., with more comprehensive bans on Fridays and Saturdays.

One of the most significant impacts of these new regulations and curfews is that people will have to also limit their dinners to family members at home, instead of celebrating the breaking of the fast with large circles of family and friends in public places or restaurants. Restaurants therefore have adapted to provide smaller-scale takeout instead of hosting huge dinner parties in luxurious ballrooms after sunset.

In turn, retail has gone up as people have increasingly started shopping online for Ramadan-themed goods to decorate their homes. 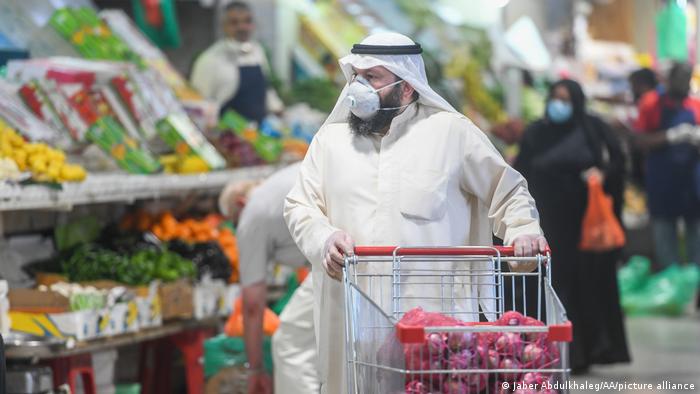 One of the most intensely discussed questions in recent weeks has been whether vaccinating is considered breaking the fast or a medical treatment. Only this week, the Grand Mufti of Jordan, Sheikh Abdul Karim Khasawneh, concluded the discussion with a fatwa that was published on the website of the General Ifta Department of the Hashemite Kingdom of Jordan: "The Corona vaccine, like any vaccine that is taken intramuscularly, does not break the fast during the blessed month of Ramadan." However, if a person who received the vaccine experiences side effects such as high temperature and takes the medicine and breaks the fast, "then he must make up that day in compliance with the Qur'anic text."

This means, that the missed days of fasting are added after the end of Ramadan, which is marked by Eid al-Fitr, the "festival of breaking the fast," which will begin in most countries on May 12.

In Tunisia, the Dar al-Ifta religious authority urged citizens to get vaccinated in a statement: "It is a duty affirmed in religion to take preventive measures and beware of infection, and it is also a national duty to demand vaccination to protect the soul and others."

Saudi Arabia will reopen the pilgrimage to residents, and then visitors from select countries. Authorities said it will return to its full capacity only after the threat of the virus has been eliminated.