The capital is the worst-hit city in India, with new infections threatening to overload the health care system. The country as a whole has reported another record daily rise in cases. 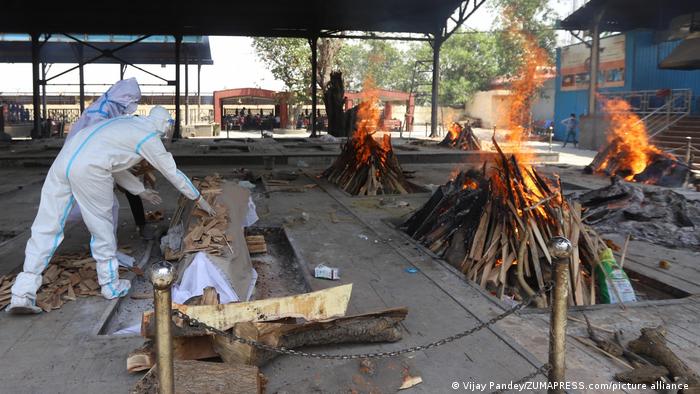 New Delhi will go into lockdown for almost a week as of Monday evening as COVID-19 infections nationwide continue to surge.

The measure is being introduced as hospitals in the Indian capital start to run out of beds and oxygen supplies.

"If we don't impose a lockdown now, we will be looking at a bigger disaster. From tonight there will be a lockdown until next Monday," said the city's Chief Minister Arvind Kejriwal.

"I do not say that the system has collapsed, but it has reached its limits,'' Kejriwal added, saying the lockdown measures were necessary to `"prevent a collapse of the health system.''

The city reported 25,462 new coronavirus cases and 161 COVID deaths in the 24 hours to Monday, the Health Ministry said.

What is the COVID situation in India?

India reported a record jump in daily coronavirus infections nationwide on Monday, with 273,810 cases in the preceding 24 hours.

Total infections have now passed the 15 million mark — approaching the number in the United States, the world's worst-hit country.

Despite the surge in infections, religious festivals and election rallies drawing thousands have continued, leading to criticism of the government's management of the pandemic.

Are COVID-19 deaths in India underreported?

The country had administered 123.9 million doses of vaccine as of Monday — the most in the world after the US and China. Per capita, it ranks much lower owing to its population of more than 1.3 billion people.

India has approved three vaccines so far: Covaxin, developed and manufactured in India; AstraZeneca, which is being produced in India as Covishield; and the Russian-made Sputnik V.