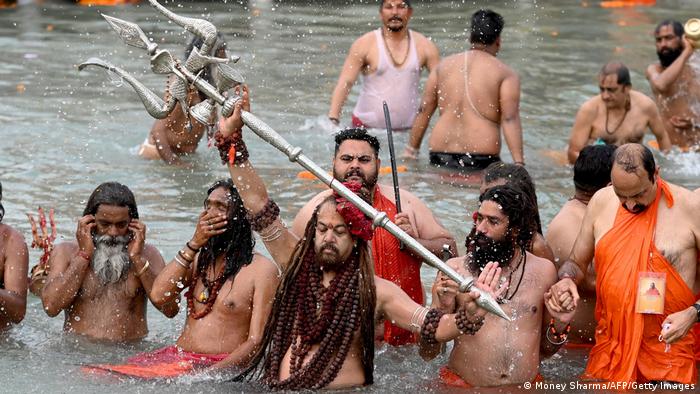 India's coronavirus infection rates are rising exponentially, with the country registering over 200,000 new infections over the last 24 hours — twice as many as 10 days prior.

Experts say the harrowing trend can be traced back to two factors — extremely virulent mutations of the original virus, and the country's lax approach to restrictions on daily life to slow the spread of infection.

India is also struggling with vaccine shortages and has administered just 114 million jabs so far for a population of over 1 billion.

However, politicians are also wary of imposing nationwide lockdowns, cognizant of the devastating economic effect of the last lockdown in Spring 2020.

The state of Maharashtra and its capital, Mumbai, and the national capital, Delhi, are among a handful of regional governments that have imposed new restrictions.

Officials have so far refused to reimpose limits after they were almost entirely done away with at the beginning of 2021. As a result, crowds have flocked to sporting, political and religious events in huge numbers.

One event, the Kumbh Mela religious festival in the northern city of Haridwar, has already attracted nearly 5 million largely non-mask wearing Hindu pilgrims to the banks of the holy Ganges River this week.

Festival organizer Siddharth Chakrapani told AFP news agency "our faith is the biggest thing for us. It is because of that strong belief that so many people have come here to take a dip in Ganga. They believe that Maa (mother) Ganga will save them from this pandemic."

Officials in Haridwar said that on Monday and Tuesday alone they detected nearly 2,000 infections among festival goers.

"People are not following the COVID guidelines. They are just careless," he told AFP.

The impact of India's vaccine shortage is being exacerbated by the effect of mutant coronavirus variants on younger people, who health officials say are showing up at hospitals in record numbers. Doctors say they are now seeing far more patients aged 45 and under.

"We are also seeing children under the ages of 12 and 15 being admitted with symptoms in the second wave. Last year, there were practically no children presenting symptoms," said Khusrav Bajan, a consultant at Mumbai's PD Hinduja National Hospital, told AFP

Doctors at the New Delhi-based All India Institute of Medical Sciences (AIIMS) said that while patients infected with last year's strain could likely infect up to 4 of every 10 people they came into contact with, the new variant makes it possible to infect 9 of 10.

In the northern state of Punjab, a full 81% of those admitted to hospital have been found to be infected with the so-called UK variant.

India had managed to partially contain the COVID-19 spread by the end of 2020, but the number of infections is rising rapidly once again. Experts say a "double mutant" variant could be responsible for this spike.