COVID: Bangladesh faces vaccine shortage as India halts exports | Asia | An in-depth look at news from across the continent | DW | 14.04.2021

Bangladesh's COVID vaccination efforts have been hit hard after India halted coronavirus vaccine shipments. India has paused exports during a surge in new infections and a rising death toll. 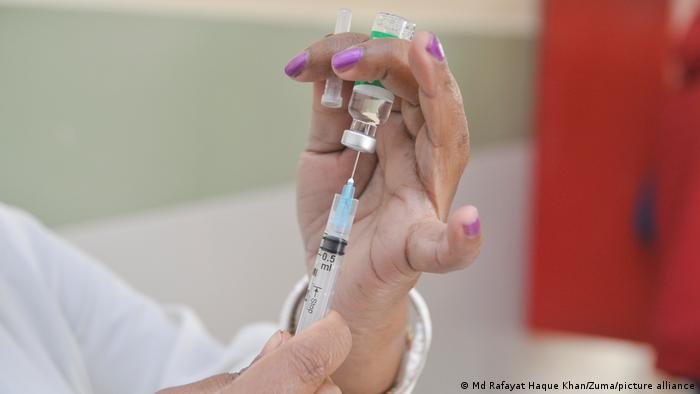 "I got the second dose of COVID-19 vaccine," Muhiuddin Niloy, a journalist based in Bangladesh's capital, Dhaka, wrote on Facebook, with a picture of himself happily sitting at a vaccination center on Monday.

He is one of the several thousand Bangladeshis who have managed to get both doses of the jab so far.

Bangladesh has been swept for the past month by a new wave of the coronavirus that has seen daily infections rise sevenfold and deaths triple. In total, around 700,000 cases and nearly 10,000 deaths have been recorded so far.

Health experts fear that the real rate of deaths and infections could be much higher. They say it's difficult to ascertain the real figure as only a small number of the nation's 167 million people are able to get tested for COVID.

Niloy registered himself for the vaccine immediately after the government started the mass vaccination program earlier this year.

Bangladesh managed to get more than 10 million vaccine doses from neighboring India, some as a gift, and the rest as part of a commercial deal with the Serum Institute of India (SII), which is manufacturing the Oxford-AstraZeneca COVID-19 vaccine.

"Bangladesh started the vaccination program very early in comparison to many other countries in the world," Niloy told DW.

"It works smoothly via an online registration system, and I got both doses in an interval of a few weeks without any problem," he added.

Not everyone has a positive view of the Oxford-AstraZeneca vaccine — the only jab that Bangladesh offers against COVID-19 at the moment.

Some people have decided not to take the vaccine, citing safety issues raised by several countries in recent weeks.

Shanu Arpita, a schoolteacher based in Dhaka, told DW that she doesn't consider the vaccine effective.

"I don't think the AstraZeneca shot will make any difference as I haven't seen any concrete evidence of its effectiveness," she said.

"The government has made the vaccine mandatory in some sectors. But ordinary people like me are not confident to take it, yet," she added.

Despite doubts about the vaccine's safety and efficacy, millions of people have registered online to receive a shot since the vaccination drive started in February.

To ensure that citizens would receive the jab as early as possible, Bangladesh signed a commercial deal with SII in 2020 to buy 30 million doses of the vaccine when ready.

According to the contract, Dhaka is supposed to get 5 million shots per month from January to June this year.

But it only received 7 million doses under the deal in the first two months of the year, according to data from India's Foreign Ministry. The other 3 million were donated by the Indian government.

Experts fear that Bangladesh's vaccination program could be severely disrupted by India's decision last month to halt the export of vaccines made by SII in order to prioritize domestic demand amid a sharp rise in cases.

It is not yet clear when SII will again be able to deliver the promised vaccine doses, but Bangladesh's government hopes to get them soon.

"We are in contact with India to get the vaccine doses that we have already paid for. Our prime minister, Sheikh Hasina, already spoke to India's prime minister, Narendra Modi, about it while he was in Dhaka last month," Farhad Hossain, Bangladesh's state minister for public administration, told DW.

"We still have vaccines in stock, and therefore, the vaccination program has been going on," he said, adding: "We are hopeful of getting new vaccines before the current stock runs out."

Observers say it may not be possible for India to restart exporting vaccines anytime soon as the country is struggling to contain a new wave of infections.

India reported 184,372 new coronavirus cases and 1,027 related deaths over the past 24 hours, hitting the highest daily caseload once again. The country now accounts for one in every six daily new infections worldwide.

To meet domestic demand for vaccines, India's government has decided to fast-track emergency approvals for COVID-19 vaccines authorized by Western countries and Japan, paving the way for possible imports of BioNTech-Pfizer, Johnson & Johnson and Moderna doses.

Zafrullah Chowdhury, the founder of Bangladesh's Gonoshasthaya Kendra health center, which offers low-cost treatment to thousands of people, told DW that Dhaka had made a mistake by relying solely on one source for the COVID-19 vaccine.

"We had the opportunity to take vaccines from other countries, including Russia, but the government failed to act promptly to seize those chances," Chowdhury said.

"We have to take the initiative to produce the coronavirus vaccine locally to fulfill the growing demand. The government needs to work in that direction," he added.

Hossain, the state minister for public administration, said his government had been trying to get vaccines from other sources as it plans to vaccinate 80% of the population in the coming months.

"Until we achieve that target, we have to stay safe by wearing masks, maintaining social distance and washing hands regularly," he said.

Bangladesh has imposed a stricter lockdown for a week to curb the new virus surge, caused by the spread of the variant first detected in South Africa, which is considered much more infectious than many other variants worldwide.