India's government has been supplying countries around the world with free coronavirus vaccine doses. However, there is some worry that this "vaccine diplomacy" will come at a cost to vulnerable Indians. 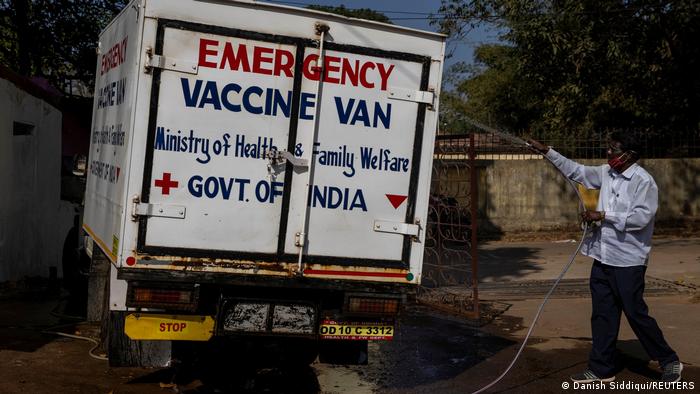 India has donated COVID vaccine doses to at least 17 countries

On Monday, the World Health Organization (WHO) approved the Oxford-AstraZeneca vaccine for use in its COVAX vaccination program, which aims to provide poorer countries around the world with "equitable access" to COVID-19 vaccines.

The Serum Institute of India (SII), the world's largest vaccine maker by volume, has agreed to produce 1.1 billion doses for delivery.

And India is leveraging its manufacturing capabilities to launch its own initiative aimed at bolstering its global image as the "pharmacy of the world."

India has already started distributing millions of its domestically produced coronavirus vaccines for free to some of its neighbors and several countries around the world.

"India is deeply honored to be a long-trusted partner in meeting the healthcare needs of the global community," Modi said last month. "Supplies of COVID vaccines to several countries will commence [on January 20], and more will follow in the days ahead."

The initiative started with countries in India's immediate neighborhood and key partner nations in the Indian Ocean. The doses were distributed as "gifts" — in line with New Delhi's "Neighborhood First" policy.  Countries in Latin America and the Caribbean were among those further afield.

According to the Foreign Ministry, India dispatched more than 15.6 million doses to 17 countries in the first two weeks.

The Indian government's global vaccine initiative has received a mixed response at home.

India has approved two coronavirus shots so far: one developed by Oxford University and AstraZeneca, and another produced by Indian firm Bharat Biotech.

India has been shipping out the Oxford-AstraZeneca vaccine, domestically produced by SII in the western city of Pune, and known in India as "Covishield."

Critics have questioned whether exporting precious vaccine doses is the right move, instead of speeding up the vaccination drive in India.

India, which has the world's second-highest caseload of coronavirus, plans to immunize 300 million people by August. It vaccinated about 3 million healthcare workers in the first two weeks of the campaign that began on January 16 and will need to step up the pace to meet the summer target.

Some argued for involving the private sector in the vaccination campaign.

Former Indian diplomat KC Singh has tweeted several times that the country was indulging in "vaccine diplomacy," amid initial concerns that the number of doses exported was more than those administered domestically.

However, Raja Mohan, Director of the Institute of South Asian Studies, National University of Singapore, said that New Delhi was making a smart move by using it's vaccine production to improve international relations.

"Delhi is showing both the political will and the diplomatic sensibility to use the cards it has," Mohan told DW.

"You cannot consume all the vaccines you produce yourself in a short time. They have a shelf life," he added.

"India is rolling out a national program, and they can take a bit of that to other countries," he said adding that India's large production capacity makes the initiative possible.

"Over the last four decades, India has become a major manufacturer of pharmaceuticals, generic drugs, and vaccines. Biotechnology research has also grown in India, which has given it more capabilities to be able to undertake such an initiative," he said.

What are India's benefits?

Closer to home, India's vaccine outreach could play a role in repairing strained ties with its immediate neighbors such as Nepal, Bangladesh and Sri Lanka.

India-Nepal relations plummeted last summer after a diplomatic spat over a border dispute.

Both countries have made competing territorial claims over a stretch of disputed land that lies at a strategic three-way junction with China.

India's relations with Bangladesh and Sri Lanka have been similarly frayed, and China has been a factor, with varying degrees, in these two cases.

But as neighboring countries line up to receive vaccines from India despite their outstanding issues, foreign policy analysts believe it indicates the pragmatism that governs the bilateral interactions.

"Generally, all of the neighbors have their problems with India," said Mohan, adding that New Delhi has something these countries need, and can take advantage of demand.

"It shows a new political will in New Delhi that whatever capabilities you have, they can be deployed smartly for diplomatic purposes."

"This is something that has changed in the foreign office under the current leadership," Mohan said. "When there's an opportunity to do something good, you build some trust."

Pakistan, unsurprisingly, is not among the countries receiving COVID vaccine shipments from India.

In a press briefing, the Indian Foreign Ministry said that they had not received any requests from Pakistan seeking vaccine supplies.

Pakistan's Foreign Office and Health Ministry did not respond to DW's requests for comment.

The country started its vaccine campaign on February 3 after receiving half a million doses of the Sinopharm vaccine donated by its longtime ally China.

"It's not that India excluded Pakistan. They don't want to take vaccines from India," Mohan said. "So many things have happened between the two countries that no Pakistani leader will ask India for help, even in the best of times," he added.

India's global vaccine distribution also seeks to offer the developing world an alternative to Chinese vaccines, which Beijing has been pushing in countries that cannot afford multibillion-dollar deals with pharmaceutical giants, or as an alternative in countries experiencing supply bottlenecks.

Over the past couple of decades, China has made significant inroads in smaller South Asian countries, which India views as part of its sphere of influence. Beijing has outspent New Delhi in trade, investment, and infrastructure.

Vaccine production is one of the areas where India could still flex its muscles.

But the goodwill generated through this initiative is unlikely to make India's neighbors more agreeable toward its interests.

"All this doesn't mean that overnight everybody is going to love India." Mohan said.

Pfizer-BioNTech will ship the first 40 million coronavirus vaccines to poorer nations next month. The WHO's COVAX scheme is aimed at 20% of vulnerable populations this year.

A robust medical cold chain to store vaccines in far-flung and remote areas is proving to be a lifesaver for people in the rural parts of Rajasthan state.