Coronavirus: India′s approval of local vaccines draws criticism | Asia | An in-depth look at news from across the continent | DW | 07.01.2021 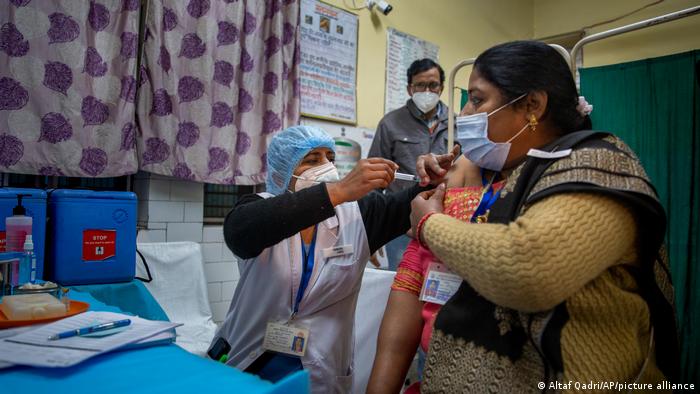 On Sunday, January 3, the Drugs Controller General of India (DCGI) approved Bharat Biotech's Covaxin and Serum Institute of India's Covishield vaccines for restricted emergency use in the country.

The vaccine made by Serum Institute is developed by Oxford University and British pharma major AstraZeneca, while Bharat Biotech's is a vaccine locally developed in collaboration with the Indian Council of Medical Research (ICMR) and National Institute of Virology.

The recommendations of the Indian drugs regulator's subject expert committee (SEC) released on Tuesday show that the panel had asked Bharat Biotech to present more efficacy data for its COVID-19 shot before it could consider approving the treatment. But the very next day, the committee recommended approving the firm's vaccine for "restricted use in emergency situation in public interest as an abundant precaution."

The fast tracking of approval for Bharat Biotech has drawn criticism from scientists and industry experts as the company is still conducting a phase III trial and has not published data about the candidate's efficacy.

The All India Drug Action Network, a nonprofit health watchdog, said it was "shocked" to see approval for Covaxin, a vaccine candidate with a lack of peer-reviewed safety and efficacy data.

"In light of the intense concerns arising from the absence of efficacy data and hence the limited regulatory review of the vaccine candidate, the implications of public rollout of an untested product, and lack of transparency, we urge the DCGI to reconsider the recommendations of the expert committee in granting the approval to Covaxin," it said.

Virologists like Shahid Jameel, director of the Trivedi School of Biosciences at Ashoka University, said he was confused with the terminology used by the DCGI.

"There is no data for the third phase of trials of Covishield and we don't know how efficacious this vaccine is," Jameel told DW.

Nitin Pai, director of Takshashila Institution, shared a similar view. "It would have been far more honest to admit that there is a strong political imperative to fast-track an indigenous vaccine, and that the regulators have accommodated it while minimizing the risks to the public."

Following criticism, Balram Bhargava, ICMR chief, said that Bharat Biotech's vaccine had only been cleared in the "clinical trial mode."

"Permission for restricted use in clinical trial mode has been allowed which means consent of participants has to be taken and there has to be a regular follow up of participants," Bhargava said at a press conference on Tuesday.

Indian Health Minister Harsh Vardhan also clarified on Twitter that the emergency use approval for COVAXIN was "in clinical trial mode," wherein all recipients of the vaccine would be tracked and monitored as if they are in trial.

Furthermore, the Health Ministry stressed that this is only an interim approval and the final one follows the completion of trials and the complete availability of data.

But the unusually cryptic language has left experts confused.

"They've introduced terminologies that are confusing," Giridhar Babu, a professor of epidemiology at the Public Health Foundation of India, told Reuters. "The phrase 'in clinical trial mode' is not generally a term you will see in approvals."

This view is shared by Srinath Reddy, president of the Public Health Foundation of India. "The regulator has not made clear what continuation in a clinical trial mode means. It is likely that this vaccine will prove to be effective, but the proof is not there yet, of a completed clinical trial. Let us hope it comes soon," he told DW.

Despite the criticism of the approval process, there appears to be high demand for the Bharat Biotech vaccine, both nationally and internationally. A day after India's regulator gave it emergency use approval, an association of private Brazilian clinics announced plans to buy 5 million doses of it.

"This should be the first vaccine available on the private market in Brazil," Geraldo Barbosa, head of the Brazilian Association of Vaccine Clinics (ABCVAC), was quoted by Reuters as saying, adding that the Covaxin doses should arrive in Brazil in mid-March, to be sold by private clinics after regulators there approve the vaccine.

Bharat Biotech has not yet applied for approval by Brazil's health regulator Anvisa for its Covaxin vaccine, and the agency said it would have to undergo Phase III trials in the country.

The company said that it is aiming to have a production capacity of about 700 million doses of its COVID-19 vaccine this year.

India, meanwhile, is preparing for a massive inoculation drive to put an end to the acute health crisis that has overwhelmed the South Asian nation's healthcare infrastructure and triggered the sharpest economic contraction in decades.

The country has the second-highest number of coronavirus infections in the world, though cases have been steadily falling since a peak in September.