India: COVID vaccine rollout poses a formidable challenge | Asia | An in-depth look at news from across the continent | DW | 01.12.2020

As hopes for an early arrival of a potential vaccine for COVID-19 rise, experts caution that logistical problems could threaten the Indian government's efforts to swiftly carry out a mass vaccination drive. 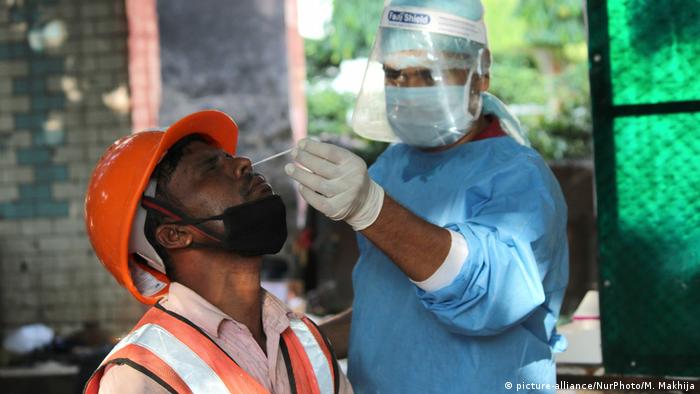 Vaccinating over 1.3 billion people against COVID-19 is a mammoth task. India hopes to receive up to 500 million doses of coronavirus vaccines by July next year to inoculate about 250 million people, according to the Health Ministry.

Given the daunting and unprecedented challenge of vaccinating such a huge population in a short time span, Prime Minister Narendra Modi has held several meetings with pharmaceutical company executives and heads of state governments to chalk out the way forward.

In his meetings with pharma majors over the weekend, Modi asked for suggestions on how to carry out the ambitious vaccine rollout.

"It was suggested they [pharmas] should take extra effort to inform the general public in simple language about the vaccine. Matters relating to logistics, transport, cold chain were discussed," said a statement from the prime minister's office.

Modi has repeatedly emphasized the importance of a vaccine to rein in COVID-19. In October, he said that the government was preparing to reach every single citizen as soon as a vaccine was ready.

On Tuesday, however, senior government officials said that India may not need to vaccinate all of its 1.3 billion people if it manages to inoculate a critical mass and break the virus' transmission.

Ensuring that the vaccine reaches everyone who needs it would involve many factors, say public health experts and virologists. The choices of vaccines, distribution, identifying groups for early vaccination, storage and more importantly, trained personnel, all play a role, the experts underline.

"When authorities start vaccinating, transparency in how the vaccine is going to be administered is paramount. People, especially those in rural India, need to know what they are getting and who will give them the jab," Shahid Jameel, epidemiologist and director of the Trivedi School of Biosciences, told DW.

"Unlike the polio vaccine which required two drops to be given, this is more complex and delicate which involves trained personnel. It has to be followed by a booster shot a month later," Jameel added.

Vaccine protection is normally expected to kick in only 10 days after receiving the second booster injection.

For now, the government hopes to rope in its nearly 240,000-strong vaccinators from its Universal Immunisation Programme (UIP) to manage the logistics of administering COVID vaccines.

The UIP, managed by the Health Ministry, covers 25 million children every year, inoculating them against a range of diseases including measles, polio, and tuberculosis.

India's Health Minister Harsh Vardhan said primary health care workers, totaling 30 million and those who are deemed among the most vulnerable, will be given priority when the vaccination program begins.

Elderly people with comorbidities such as diabetes, heart disease, obesity and high blood pressure have been identified as the next target group.

"The biggest challenge will be how the program will be rolled out and it has to be in batches. This is an intramuscular injection that requires two jabs within 3 to 4 weeks. It has to be done by trained personnel and that is why a special task force for vaccination is a good idea," K Srinath Reddy, president of the Public Health Foundation of India, told DW.

"We have to clear the fog on who will staff these vaccination stations and how it will be supervised. This plan of action needs to be articulated as we have never attempted such a huge exercise," T Jacob John, a virologist, told DW.

Experts also believe that the government should spell out whether the vaccination should be confined to only uninfected individuals or encompass everyone.

Transport and cold storage are key

Getting vaccines to people who need them will require over a billion vials to be manufactured, filled and shipped, at top speed and in some cases, under extreme stress.

Officials will also need to scale up the nation's cold chain and distribution infrastructure, say observers, pointing out that last-mile connectivity, cooling facilities in the final delivery stages and a lack of storage at clinics would pose the biggest challenge to delivering vaccines on a high scale.

"Maintaining the cold chain, having adequate syringes, adequate needles and being able to deliver it to the remotest part of the country in a flawless way is the biggest challenge," Randeep Guleria, director of the All India Institute of Medical Sciences, told DW.

The air cargo industry will have a key role to play in the whole vaccine delivery chain due to the nature of the cargo and the need for a speedy delivery. To coordinate the mammoth task of transporting the vaccines across the country, several big pharmaceutical companies are in talks with logistical firms.

Private players like Snowman Logistics, Deutsche Post DHL-owned Blue Dart Express, Allcargo Logistics and Mahindra Logistics are among those competing to transport the vaccines across the country.

New infections on the decline

At present, three prominent vaccine candidates are being tested in India, only one of which — Covishield — had reached Phase-3 trials.

Covishield, developed by Oxford University and AstraZeneca, is being tested in India by the Pune-based Serum Institute, which has committed to producing 200 million doses for India and other low- and middle-income countries, should the vaccine candidate prove successful and be cleared by regulators.

The company said it would apply for emergency regulatory approval for the vaccine. The other two candidates, being tested by Zydus Cadilla and Bharat Biotech, are in Phase-2 trials.

India currently has the world's second-highest number of coronavirus infections, behind only the United States, with 9.46 million cases and 137,621 deaths.

Coronavirus: Why hand-washing is a luxury for most Indians