People in India are increasingly lowering their guard during the ongoing festival season, despite the high risk of contracting COVID-19. Many restrictions have been lifted, but the pandemic is far from over. 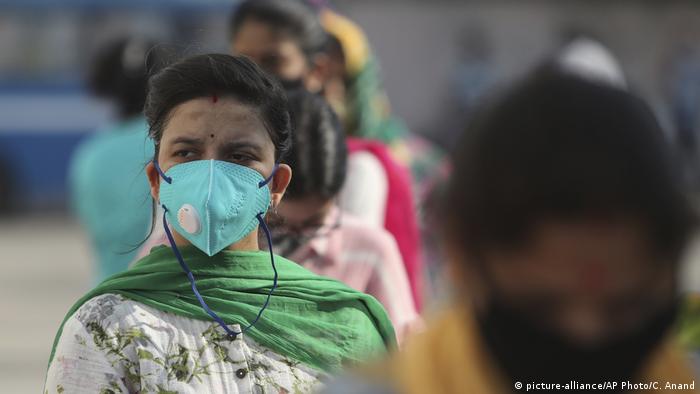 Rudra Nath, 42, a factory foreman in Alwar district of northwestern Rajasthan state, says he feels exasperated having to tell his co-workers to keep their masks on all the time.

It has been over a month since the iron fabrication factory resumed production. Since June, the government has been gradually relaxing restrictions on public movement and commerce meant to contain the coronavirus.

Business has been slowly picking up, with orders coming in from across the state.

"Many of the workers are not afraid of the virus anymore. They feel the worst has passed and a cure is round the corner even if they become sick," Nath told DW.

Wearing a mask seems an exception in Rajasthan, particularly in rural areas, where most people are going about their lives as if the pandemic is over. Many are ignoring rules on physical distancing, and authorities' lax enforcement of the measures has compounded the problem.

In the central state of Madhya Pradesh, it would almost seem as if the pandemic did not exist. Across vast swathes of its hinterland, people are carrying on with work, travel and shopping in markets without wearing masks.

"We are more wary of visitors coming from cities. We maintain physical distance from them. On our own, we have nothing to worry about," Prabath Kumar Singh, a postmaster from Mandsaur district, told DW.

India has so far recorded over 8.5 million coronavirus infections, second only to the United States in the total number of cases, and more than 126,000 related deaths.

The country has witnessed a drop in the recorded daily new cases over the past month. However, India still registers about 50,000 new cases on average every day.

People now do not appear to fear the virus as much as they did eight months ago, when the government first announced a nationwide lockdown.

"When the strict lockdown was in place and public movement was restricted, people were scared. At that time, fear was a force that directed behavior. That is no longer the case," Anant Kumar, a urologist and surgeon, told DW.

Recently conducted studies reveal that Indians appear less afraid of contracting the virus and more worried about the health emergency's impact on the economy and their personal finances.

"In India, more people were worried about the availability of essentials such as food items and medicines than about falling sick," Jacob John, a virologist, told DW.

A government-appointed team of scientists has recently claimed that COVID-19 in India may have already peaked and will run its course by February next year.

According to the panel, the number of daily new coronavirus infections in the country will continue to fall and the pandemic may be under control by February 2021, provided all health protocols are followed and the government does not relax social distancing rules further.

The committee also claimed that around 30% of India's population has developed antibodies against the virus.

Will it get worse in India?

Though India's total caseload is second only to the US, its death toll per million people remains relatively low.

The figure is hovering around 83 per million, while in countries like France, Spain and the UK, the number ranges between 500 and 700 per million.

The Indian government claims the nation's relatively lower COVID-19 death rate is a sign of success in handling the crisis. It has used the figure to support the lifting of restrictions.

However, with air pollution rife in northern India during winter, epidemiologists warn that transmission of the virus could accelerate in the coming months.

M C Mishra, former medical superintendent of the prestigious All India Institute of Medical Sciences, told DW that the festival season could also spread the virus.

"We have Diwali, the festival of lights, round the corner and we are already seeing people thronging markets and malls. This disease is highly contagious and for all we know we could see another surge in a couple of months like Europe is witnessing."

As COVID-19 cases rise, workers in India fear a return to tougher coronavirus measures will push up unemployment

The pandemic has hobbled India's diamond industry in Surat, where workers say their wages have been cut in half. Although factories are open, social distancing has reduced production capacity.