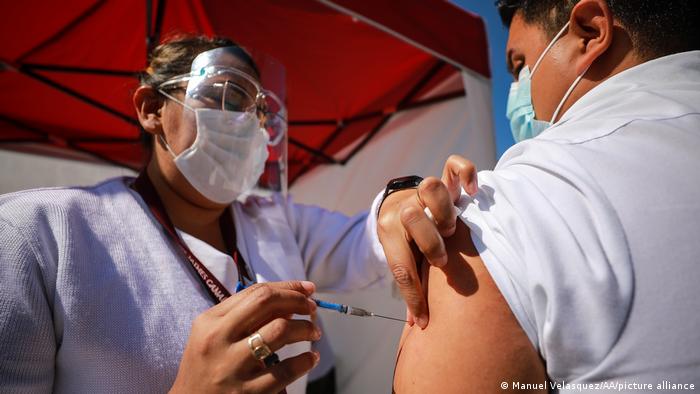 Vaccination campaigns against COVID-19 are gaining momentum across the world

At least 73 vaccines to protect humans against the deadly coronavirus are currently in development globally, according to the COVID-19 vaccine tracker run by a team of epidemologists and health experts at McGill Unviersity in Canada. Six drugs have passed the hurdles for public use in at least one country, while others have been in use for months without it. Read on to learn more.

The vaccine produced by the American biotech company Moderna was approved for public use in the US in December. Approval in the EU seems to be imminent, with European regulators planning to review the vaccine's status on January 6.

Moderna has said it will produce the "vast majority" of its vaccine in Cambridge, Massachusetts, where the firm is based. It plans to produce a minimum of 600 million doses this year, with a goal of producing as many as 1 billion doses in 2021.

The European Union has ordered 80 million doses of the vaccine with an option of buying an additional 80 million, while the US has secured 200 million doses with the option of purchasing another 300 million. The UK, Japan, Switzerland, and South Korea have also reserved doses. Canada, who has also approved the drug, has reserved 40 million doses.

The vaccine developed by the Swedish-British drugmaker in partnership with the University of Oxford has been approved for use in the UK, India, and Argentina. They expect to produce some 3 billion doses of their drug for use in 2021, director of Oxford's Jenner Institute Adrian Hill said in November.

Producing a global vaccine has required establishing "regional supply chains consisting of more than 20 supply partners in more than 15 countries," AstraZeneca Senior Vice President of Global Biologics Operations Per Alfredsson said in a video statement on the company's website.

Initial supplies of the vaccine in Europe will come from Germany and Belgium, Ian McCubbin, manufacturing lead for the Vaccine Taskforce in the UK, told reporters in December. Doses will also be produced in India by the Serum Institute of India, the world's largest vaccine manufacturer.

The first coronavirus vaccine authorized for use in the EU — the drug produced by German biotech firm BioNTech and US pharmaceutical giant Pfizer — has also been approved for use in the US, UK, Saudi Arabia as well as at least 19 other countries.

The drug is being produced at BioNtech and Pfizer facilities in Germany and Belgium as well as in other countries, Pfizer said in a statement.

As part of its vaccination strategy, the EU has secured deals with six producers. But thus far the BioNTech vaccine is the only one to be approved in the bloc. In response, the Mainz-based company has said it aims to start production "far earlier than planned" at a new manufacturing facility in Marburg, Germany. With a goal of opening in February, BioNTech has said the new location should be able to produce an additional 250 million doses in the first half of this year, for a total production capacity of 750 million doses a year.

Together, Pfizer and BioNtech project they will produce as much as 1.3 billion doses for global use in 2021, Pfizer said in a press release. The EU has reserved 300 million doses and the US 200 million.

In August, many health experts were shocked when Russia became the first country to approve a vaccine, months ahead of other countries. The vaccine Sputnik V has since been approved for use in Belarus, Argentina and Guinea. Scientists in Russia and abroad have questioned the decision to approve the vaccine ahead of Phase 3 trials that normally last for months and involve thousands of people,

Developed by the state-run Gamaleya Research Institute and the Health Ministry of the Russian Federation, the production of the vaccine is funded by Russia's Sovereign Wealth Fund (RDIF). According to the RDIF, the vaccine will be manufactured by its partner firms in India, China, Brazil, South Korea and other countries. Over 50 countries have requested access to more than 1.2 billion doses of the vaccine, RDIF said on an informational website about Sputnik V.

Chinese regulators last week gave "conditional" approval for a vaccine developed by the Beijing unit of the state-backed Sinopharm, or China National Pharmaceutical Group. The vaccine is still in late-stage clinical trials.

While China has lagged behind other countries in formally approving vaccines against COVID-19, millions of people — largely members of key groups that include healthcare, food sector and community workers — in China have already been vaccinated as part of an emergency program. Now the country is rushing to complete millions more ahead of the Lunar New Year holiday in February, in which hundreds of millions of people travel across China. A second vaccine candidate developed by a Sinopharm unit in Wuhan, also in late-stage clinical trials, is already in use as well.

The United Arab Emirates approved the Beijing vaccine in December and has already received 3 million doses, according to China National Biotec Group, a subsidiary of Sinopharm. Bahrain has also approved the vaccine, and Pakistan has said it will purchase 1.2 million doses, the Reuters news agency reported.

Sinopharm's annual production capacity is expected to reach one billion doses by the end of 2021, according to state-backed newspaper, China Daily.

Like the Sinopharm vaccines, the vaccine produced by Beijing-based biopharmaceuticals firm Sinovac is also still in late-stage testing but already in public use.

Doses have already been secured by Singapore, Turkey, Brazil, Chile as well as Indonesia, where doses of the vaccine have already arrived as the Southeast Asian country prepares for a mass vaccination campaign.

Developed by India's Bharat Biotech International, the Covaxin vaccine was approved in India on January 3 along with the  Oxford-AstraZeneca vaccine. While Indian Prime Minister Narendra Modi called the vaccine a "game changer," health experts have expressed dismay that the proper trials or peer review had been completed. Bharat Biotech Chairman Krishna Ella told reporters the emergency authorization is perfectly valid under the circumstances and that 20 million doses are already available. The company aims to produce about 700 million doses this year at four facilities in India, he said.

India is among the countries the hardest hit by the pandemic: some 150,000 people in India have been killed by the virus.