Amid pressure to speed up inoculation, German officials are looking into stretching their supply of the BioNTech-Pfizer vaccine to get more shots. 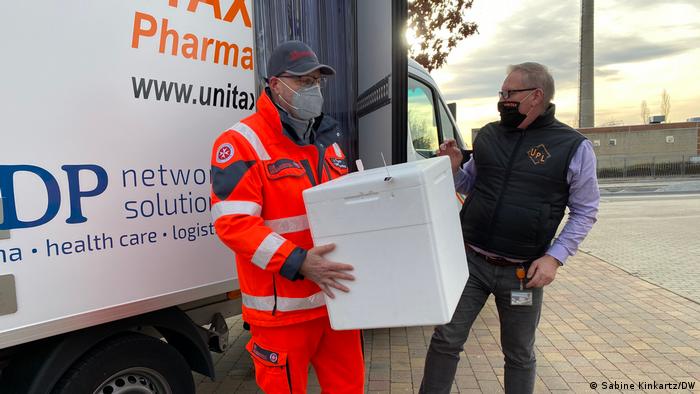 Nearly 265,000 people have received the first shot of the BioNTech-Pfizer vaccine in Germany

The German government acknowledged "the impatience" surrounding their vaccination drive on Monday, as more and more critics, including senior politicians, decried the effort as too slow.

This sentiment, as well as "the many questions people are now asking" are "entirely understandable," said Chancellor Angela Merkel's spokesman Steffen Seibert. He pledged that "some things can and will improve."

However, he also defended Berlin's decision to order the vaccine through the EU Commission and work together with other bloc members.

The move "was and is the right way," said Seibert. The way the EU jointly tackles the crisis will help determine "what we, as in the EU, are worth," he added.

Germany had also made a bilateral deal with BioNTech-Pfizer for 30 million doses in September, two months before the EU-wide order of 200 million shots in November. The EU has since upped its order by another 100 million doses.

Squeezing more shots out of bottle

Nearly 265,000 people have so far received the first shot of the coronavirus vaccine, German authorities said on Monday, as the nationwide inoculation drive entered its second week in the country of some 83 million people. Authorities are administering the BioNTech-Pfizer vaccine, which requires another booster shot weeks later in order to reach full efficiency.

Critics claim the government has failed to provide enough doses, while experts warn of the logistical challenges of storing the vaccine, which requires very low temperatures to maintain its effect.

Meanwhile, German Health Minister Jens Spahn was looking into ways to stretch the current vaccine supply. One of those ways could be to split the vaccine bottles into six instead of the usual five doses, while another would stretch the time between receiving the first and the second dose, according to a paper from the German Health Ministry.

Separately, the EU Commission said on Monday they were talking to Pfizer and BioNTech about ordering extra doses of the vaccine. The European Medicines Agency was meeting to discuss giving the green light to another vaccine, made by US company Moderna.

Germany behind UK, US

The vaccination drive is moving much faster in Germany than in France, even as French Health Minister Oliver Veran spoke of "thousands" who received their coronavirus shots on Monday. Only 500 people had received the vaccine during the previous week.

However, the UK has reportedly immunized over 1 million people and over 4.3 million have received the vaccine in the US. Both of those countries also started their campaigns weeks before Germany.

Spahn, from Angela Merkel's conservative CDU party, faced criticism on Monday from both the opposition and members of the CDU's coalition partner, the left-leaning Social Democrats (SPD). The SPD's secretary general, Lars Klingbeil, blamed Spahn for the delays and called for a "nationwide effort" to speed up the vaccination drive under the leadership of Merkel. Speaking to public broadcaster ARD, Klingbeil urged the government to set up a meeting with pharma companies where they could discuss ways to boost production.

Moderna says its pharma competitors used mRNA technology that it had developed years before the pandemic. The lawsuit has been filed in a US District Court in Massachusetts and the Regional Court of Düsseldorf.