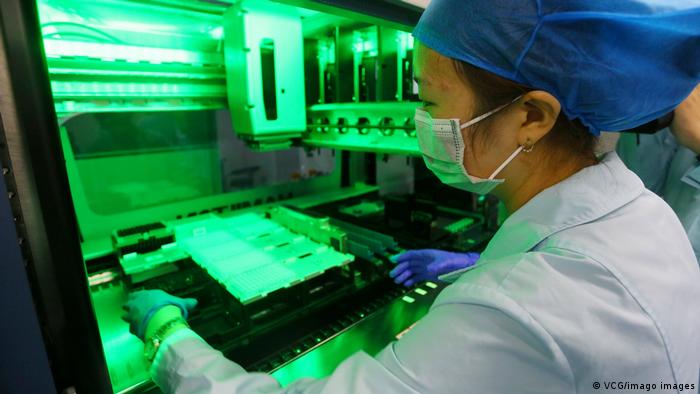 China announced the approval of its first COVID-19 vaccine on Thursday. The vaccine has been developed by state-owned pharmaceutical company Sinopharm.

The approval of the inactivated, two-dose vaccine comes a day after Sinopharm said it was found to be 79.3% effective in initial data from the final phase of testing.

China plans to vaccinate up to 50 million people ahead of the Lunar New Year holiday in February, in order to prevent the virus from spreading during the festivities.

Sinopharm is among the Chinese developers that are in a global race to create vaccines to beat the coronavirus pandemic, which has claimed close to 1.8 million lives around the world.

China has detected its first imported case of the new coronavirus variant, which was first detected in the UK, according to a publication run by the Chinese Center for Disease Control and Prevention (CDC).

The variant was found in a 23-year-old female student returning to China from Britain. She was tested in Shanghai on December 14, the CDC added.

The case "poses a great potential threat to the prevention and control of COVID-19 in China," the publication said.

Meanwhile, December 31 marks exactly a year since DW first reported on the emergence of a mystery flu-like virus in Wuhan, China. Here's a look at what happened next.

Berlin's police chief said Thursday that thousands of officers have been deployed in the German capital to enforce bans on anti-coronavirus protests and the use of fireworks on New Year's Eve.

Barbara Slowik told public broadcaster rbb-Inforadio that police was prepared for the possibility that anti-COVID lockdown protesters or left-wing extremists might ignore a ban on demonstrations.

German courts this week rejected legal challenges against the ban on public gatherings in Berlin on New Year's Eve and New Year's Day that the government had imposed due to the COVID-19 pandemic.

In her New Year's speech on Thursday, Germany's chancellor Angela Merkel said the "historic" coronavirus crisis will extend into the coming year even if the vaccines bring some promise.

She slammed the conspiracy theories advanced by COVID skeptics as false and dangerous, adding that they were also cynical and cruel towards the people who have suffered during the pandemic.

According to the latest figures from the Robert Koch Institute (RKI) for infectious diseases, the death toll increased by 964 to 33,071.

Germany's Health Minister Jens Spahn said this week that he can see no end in sight for the nationwide lockdown.

Hungarian Prime Minister Viktor Orban's chief of staff said Thursday that the country will buy coronavirus vaccines either through the European Union's procurement mechanism or directly from China because Russia does not have the capacity to manufacture adequate amount of vaccines.

Hungary, which participated in Russia's Sputnik-V vaccine testing efforts, was an early recipient of small batches of the vaccine. The EU had feared that Hungary would bypass its vaccine approval mechanism.

In Belgium, 26 residents of a retirement home died of coronavirus after a man dressed up as Santa Claus visited the facility. Health officials said Thursday the man was a carrier of the virus but was not aware of his infection. He was only tested positive later.

The home in Antwerp province housed 169 people, an employee told the AFP news agency. Some 85 residents and 40 employees of the old people's home have been infected with the coronavirus.

Norway's justice ministry has announced that all travelers entering the country will have to take a COVID-19 test upon arrival, or up to 24 hours after, from January 2.

The measure has been taken to stop the coronavirus variant, first detected in Britain, from spreading in the country.

A four-day lockdown is set to begin in Turkey at 9 p.m. local time on New Year's Eve in a bid to stem the spread of COVID-19.

The government has warned that parties will not be allowed and law enforcement will monitor for any violations.

Istanbul's governor said Thursday some 34,000 law enforcement personnel would be on duty to enforce the rules in Turkey's most populous city.

The United States recorded its highest ever death toll from COVID-19 on Wednesday with over 3,900 new deaths

The new figures come at a time when health workers in the country are preparing for a spike in the caseload after holiday gatherings.

The US is the worst-affected country in the world with more than 19.7 million infections and 341,000 deaths.

Mexico has initiated a probe into allegations of abuse of power by a family to obtain shots of the COVID-19 vaccine, President Andres Manuel Lopez Obrador said on Wednesday.

The incident allegedly took place in a hospital in a western municipality of the capital and involves a doctor and his family, the president told the media.

He urged people to report potential abuses in the country's vaccine rollout.

Mexico began its inoculation process with the first few thousand of the BioNTech-Pfizer vaccine last week.

The country is helping to produce the Oxford University-AstraZeneca vaccine and has agreements to receive doses starting March.

In its first major vaccine deal, Bolivia has reached an agreement with Russia for doses of the Sputnik V vaccine.

The Russia Direct Investment Fund (RDIF) on Wednesday agreed to supply Bolivia with enough of its two-dose vaccine to vaccinate 2.6 million people.

The South American nation, which also battled political and social instability alongside the pandemic, has been struggling to secure bilateral vaccine deals.

The government is looking to vaccinate up to 20% of its population in the first quarter of 2021 as part of the World Health Organization's COVAX initiative, which is aimed at ensuring the equitable distribution of vaccines.

Brazil, meanwhile, is at the risk of not having enough syringes to roll out its vaccines.

The country's syringe and needle makers on Wednesday cautioned that the vaccination plan was in jeopardy as the government set auction prices too low and failed to draw bids for enough syringes.

The Health Ministry had set out to buy 331 million syringes at an auction on Tuesday but purchased just 8 million after it set reference prices below the bids of the companies involved.

Japan posted 4,518 new coronavirus cases on Thursday, the highest daily tally since the COVID outbreak in the East Asian county.

"It is no surprise that an explosive outbreak could take place at any time," Tokyo Governor Yuriko Koike told a news conference late Wednesday, urging 14 million Tokyo residents to stay at home during the year-end holiday period.

"We are standing at a critical juncture, whether we can overcome this situation," she added.

South Korea's Justice Ministry gave a formal apology to the inmates and staff at the Dongbu prison in Seoul on Thursday after the prison recorded 790 cases. Authorities blamed the rapid spread on a lack of protective measures.

Deputy Justice Minister Lee Yong Gu said that all prison visits will be suspended for two weeks in order to curb the spread. Visits from attorneys will also be restricted.

Fosun Pharmaceutical Group in China plans to manufacture 200 million doses of the BioNTech-Pfizer vaccine, according to reports by Caixin magazine. There was no indication of how long the production of that many doses would take.

In a written response to a Reuters request for comment, a BioNTech representative said the detailed supply arrangement will be subject to further negotiation between the two firms.

New Delhi and other cities across India stepped up efforts to curb the spread of COVID-19 by announcing a night-time curfew for New Year's Eve and New Year's Day.

Authorities have been worried that the new virulent strain has entered the country from the UK — with 25 reported cases so far — and were frantically tracking down people who recently traveled from there before flights were suspended on December 23.