COVID 1 year on: What we reported then, what happened next

On December 31, 2019, DW first reported on a mysterious disease in China. Quickly, it turned into a global pandemic. Here, we look back on those early developments, and the early lessons we learned. 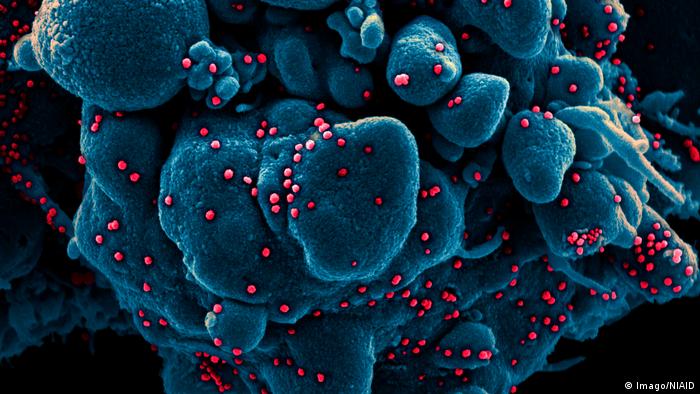 It wasn't clear at first if the virus, highlighted here in red, could be transmitted from person to person

'Chinese health authorities are investigating 27 cases of viral pneumonia in central Hubei province.' That was the opening line in DW's first report on what would become the global coronavirus pandemic.

Following that initial news on December 31, 2019, we published four more articles before the word "coronavirus" was used for the first time on January 9.

Between then and the first reported case in Germany on January 28, the information available was often uncertain and unclear. We've come a long way since then.

What we reported: No evidence of human-to-human spread

Experts in the central Chinese city of Wuhan were investigating after 27 people were struck down by viral pneumonia. However, The Wuhan Health Commission found no human-to-human transmission. It attributed the disease to visits to the fish market, which also sold live animals other than fish.

The World Health Organization (WHO) officially announced a "new pneumonia of unknown cause" on January 5. It cited preliminary information from the Chinese investigation team that no evidence of significant human-to-human transmission and no health care worker infections had been reported.

But on January 9, the WHO made a further announcement saying the disease could be a new coronavirus — a large family of viruses that can cause person-to-person transmission, but not necessarily. It cited Chinese authorities as saying that, while the virus could cause severe illness in some patients, it did not transmit readily between people

However, cases were spiraling, with the number of cases doubling about every seven and a half days at the beginning of the outbreak.

By January 20, China's National Health Commission confirmed that the virus was being spread by human-to-human contact after a report that two people in the southern Guangdong province caught the virus from family members.

A report in British medical journal The Lancet on January 24 said testing for the virus was essential due to its "pandemic potential."

What we reported: Not the same as SARS

On January 5, Chinese authorities said the new disease was not caused by the same virus as the severe acute respiratory syndrome (SARS) that killed hundreds of people in 2003. The denial came after one test for the virus at the end of December was said to have given a false-positive result.

While the virus didn't turn out to be the same one that caused SARS in the early 2000s, it appeared to be similar.

A novel coronavirus, at the time termed 2019-nCoV, was officially announced as the causative agent by Chinese authorities on January 7.

Soon after, a consortium of Chinese researchers published a draft genome of the suspected agent. The genome sequences suggested the virus was closely related to the coronavirus that caused the 2002/03 outbreak of SARS.

Evolutionary biologist Andrew Rambaut, of the University of Edinburgh, calculated at that time that the virus had an 89% similarity to a severe acute respiratory syndrome.

By February 11, the International Committee on Taxonomy of Viruses adopted the official name "severe acute respiratory syndrome coronavirus 2" (SARS-CoV-2). To avoid confusion with SARS, which is more severe but less easily spread, the WHO sometimes refers to SARS-CoV-2 as simply "the COVID-19 virus."

On January 22, the city of Wuhan — home to some 11 million people — was effectively locked down. Public transport was suspended and private vehicles were banned from the roads.

Wuhan's lockdown lasted 76 days and got stricter as well as more widespread. Soon after, similar measures were implemented in every city in the wider Hubei province.

Across the country, 14,000 health checkpoints were established at public transport hubs. School and university reopenings after the winter vacation were delayed.

At first, people were allowed out of their homes, but restrictions soon tightened. In some places, outings were limited to one family member every two days to buy necessities. In others, officials barred residents from leaving altogether, requiring them to order in food and other supplies from couriers.

The policy would become even more aggressive, with officials going door to door to conduct health checks and forcing anyone ill into isolation.

Some observers in the West were initially skeptical of the lockdown and said it would only be possible in an authoritarian state.

However, the measures were eventually deemed to have had a dramatic impact on the spread of the virus. A year on, life in the city appears to have become almost normal.

When northern Italy became a new global hotspot in late February, the Italian government imposed what has been called a "Wuhan-style lockdown." The restrictions saw nearly a dozen towns of 50,000 people in the provinces of Lombardy and Veneto placed into quarantine.

Lockdowns and travel restrictions were imposed as numbers soared elsewhere during the pandemic. However, none appeared to be as strict as that in Wuhan.

What we reported: WHO says 'too early' to call emergency

On January 23, the World Health Organization said it was "too early" to declare a global health emergency over the newly discovered strain of the coronavirus.

The decision not to give the outbreak top-level emergency status had been taken when the death toll was below 50. However, the consensus seemed to change as reported deaths continued to increase in subsequent days.

The WHO reconvened its emergency committee on January 30, two days earlier than planned. The organization said it regretted previously calling the virus risk "moderate." It admitted the issue needed to be re-evaluated after human-to-human infections started occurring outside of China.

At the meeting, the committee recommended the declaration of a Public Health Emergency of International Concern (PHEIC). WHO Director-General Tedros Adhanom Ghebreyesus accepted this.

Making the declaration, he specifically referred to the evidence of human-to-human transmission in Germany, Vietnam, and Japan, calling this a worrying development. However, the main reason Tedros gave for declaring the emergency was a need to protect countries with weaker healthcare systems.

By February 11, Tedros said the novel coronavirus was "the number one enemy to the whole world, and to the whole of humanity." On the same day, the WHO chief announced a new official name for the disease, saying that the agency has dubbed it COVID-19.

What we reported: Risk from Bavaria outbreak 'low'

On January 28, DW reported on the first known case in Germany, but that the risk of infection for the people of Bavaria was currently considered to be "low." That case, and a further three that emerged at around the same the time, were connected to the recent visit of a Chinese worker to a company workshop just outside Munich.

By mid-February the number of cases in Germany had increased to 16 – 14 of which were in Bavaria. However, thanks to testing, contact tracing, isolation, and quarantine, the Bavarian outbreak appeared to have been brought largely under control.

However, new outbreaks that had been seeded from other sources began to spread. While it was possible to contain a known outbreak if it was addressed in time, and with sufficient resources, the risk was always present that the virus might find a new foothold. That reality became even more evident when the WHO declared a pandemic on March 11.

By late February, multiple cases linked to northern Italy were detected in the southwestern state of Baden-Württemberg.

A large cluster linked to a carnival event also arose in Heinsberg, in the western state of North Rhine-Westphalia, with the first death being reported on 9 March 2020.

The need to break the chain of transmission with nationwide measures in the form of a lockdown became evident.

One year ago, ophtalmologist Li Wenliang was the first to share information about a SARS-type lung infection with colleagues in Wuhan. Since then, researchers have learned a lot. Here are the most important points.