China has locked down a city of 11 million ahead of a major public holiday as fears of a coronavirus epidemic grow. Residents are concerned about food shortages and overloaded hospitals. 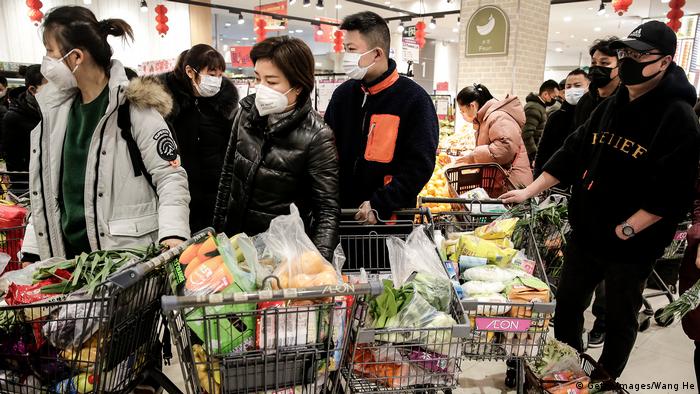 Chinese authorities Thursday locked down the city of Wuhan, in an unprecedented measure to stop the spread of a coronavirus that has killed at least 17 people and infected hundreds more since December.

Wuhan is a major industrial hub and manufacturing center with a population of 11 million, and trying to contain movement in and out of the city is a radical step by authorities. The World Health Organization (WHO) said Thursday that trying to contain a city the size of Wuhan is "new to science."

The size and population of Wuhan is comparable to London. The mysterious virus is thought to have originated in one of the city's fish markets.

Since Thursday morning, police and paramilitary troops have been turning travelers away from Wuhan's long-distance train stations. Most flights in and out of the city have been canceled. In the afternoon, state media reported that authorities were beginning to shut down roads and highways leaving the city.

According to the German embassy in Beijing, around 50 German citizens are currently in Wuhan.

"The entire city's public transportation has been suspended since 10 a.m. this morning, and when my dad tried to buy some food from our local market this morning, everything was sold out," a Wuhan resident told DW by telephone.

"Most people in Wuhan have chosen to stay home rather than trying to leave the city. My family believes it's safer to keep everyone from Wuhan in the city, so the virus won't continue to spread elsewhere."

Another resident said that hospitals in Wuhan have been overloaded for weeks, as people come in concerned about symptoms.

"There has not been enough space for patients in the quarantine area. Many patients with minor symptoms were asked to go home and self-quarantine."

The 35-year-old woman added that she was certain that the virus was still spreading from Wuhan.

"I think the actual number of people who has contracted the virus is definitely higher than the reported cases that we are seeing right now."

"Many elderly in Wuhan seem to believe that the pandemic is not as serious as the government has described, so they were unwilling to put on masks."

The extreme measures show how seriously authorities are taking the containment of the coronavirus. Around midnight local time, authorities began cutting off public transportation in the cities of Huanggang and Ezhou, both located around 75 kilometers (45 miles) east of Wuhan in Hubei province.

Officials don't want to repeat the mistakes of the past. The SARS virus, an acute respiratory illness, killed more than 600 people in Hong Kong and mainland China during an outbreak in 2002.

At the time, Chinese authorities concealed the size and threat of the outbreak by hiding information. With the current outbreak, officials want to do exactly the opposite. For example, information on the outbreak is being prominently reported on the evening news.

On Tuesday, the Chinese Communist Party asked provincial leaders to be as transparent as possible and warned against concealing the outbreak of infections or putting political interests ahead of public health.

Users on the Chinese social media network Weibo said that they are concerned about the government being transparent and timely on releasing information about the outbreak of the virus.