Many countries are trying to secure anti-COVID-19 doses from India, the world's largest manufacturer of vaccines. But India's domestic vaccination demand is also huge. 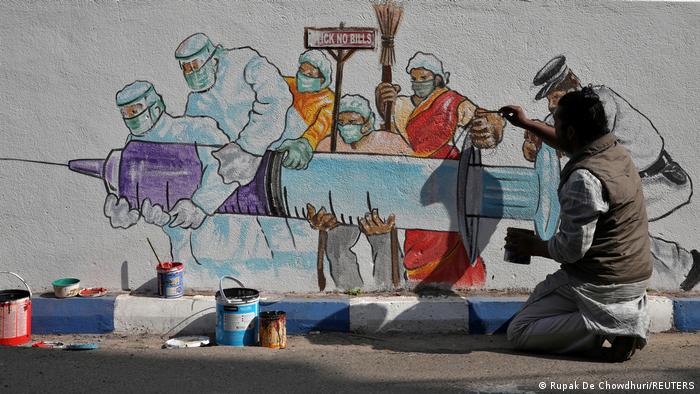 The Indian government has announced that it will start a nationwide COVID-19 vaccination program on January 16. The South Asian country plans to vaccinate 300 million people in its first phase of the inoculation drive, including healthcare and front-line workers, police officers, members of the military and people with comorbidities over the age of 50.

The drug regulator is also reviewing a vaccine application from BioNTech-Pfizer.

The Pune-based Serum Institute, the world's largest vaccine manufacturing company, has already stockpiled tens of millions of doses for the AstraZeneca Covishield vaccine.

India has the second-highest coronavirus caseload in the world, after the US, with close to 10.5 million infections recorded since the beginning of the pandemic. New daily cases, however, have dropped from a peak of over 90,000 in September, and COVID-19 deaths are lower than in other badly affected countries.

Demand from other countries

The Indian government is facing a huge challenge to vaccinate its 1.3 billion population. At the same time, there is a big demand from other countries to secure doses produced by the Serum Institute.

"The fact that these countries — some of them our neighbors — are depending on us to vaccinate their populations, the manufacturers will likely deliver doses to them soon," Dr Jacob John, a virologist, told DW.

"These orders will be dealt by the Serum Institute," he added.

Prime Minister Narendra Modi has said that India would be a major COVID-19 vaccine supplier to the world in coming months.

"India has been supplying medicines to the world," Modi said at a convention on Saturday. "The world is also watching how India runs the biggest vaccination program," he added.

India's Health Ministry has clarified that it has not banned the export of COVID-19 vaccines to other countries.

"The government has not taken any such action, and this should be absolutely clear," said Health Secretary Rajesh Bhushan.

The Serum Institute declined a DW request to confirm the names of countries that have placed a vaccine order, and when it plans to supply these vaccines to them.

"We will not say anything on this right now. Our priority is the rollout in India and to help our own people," a Serum official told DW on condition of anonymity.

Serum's Chief Executive Adar Poonawalla recently said that the first 100 million vaccine doses will be sold to the government at a special price of 200 rupees (€2.24, $2.73) and that the institute will reevaluate rates at a later stage.

In the private market, the vaccine will be sold for 1,000 rupees.

The Serum Institute and Bharat Biotech have reportedly stockpiled more than 70 million doses of vaccines and will scale up production to meet demands.

"Now that two COVID-19 vaccines have been issued emergency use authorization in India, our focus is on manufacturing, supply, and distribution, such that populations that need it the most receive high quality, safe and efficacious vaccines," the two companies said in a joint statement.

The Serum Institute is a part of the COVAX facility, a global partnership launched by the World Health Organization to ensure that people worldwide have access to the COVID-19 vaccine.

"Serum had already signed an agreement with the Bill and Melinda Gates Foundation, as well as Gavi, the Vaccine Alliance, to prepare 100 million doses of a vaccine," Shahih Jameel, a virologist and director of the Trivedi School of Biosciences at Ashoka University, said.

"But the timeline for these exports is unclear. It might not happen until March or April," Jameel added.

Krishna Ella, chairman and managing director of Bharat Biotech, recently claimed that around 12 to 14 countries, including the US and the UK, have shown interest in its vaccine.

"All these countries want the vaccine to be safe, without long-term side-effects," Ella told the media last week.

"We are also in advance talks with the Bangladeshi government for starting clinical trials there," he added.