Despite a falling infection rate, the number of cases in India has continued to climb taking the total number of infections over 10 million since the pandemic began. Follow DW for the latest on COVID-19 news. 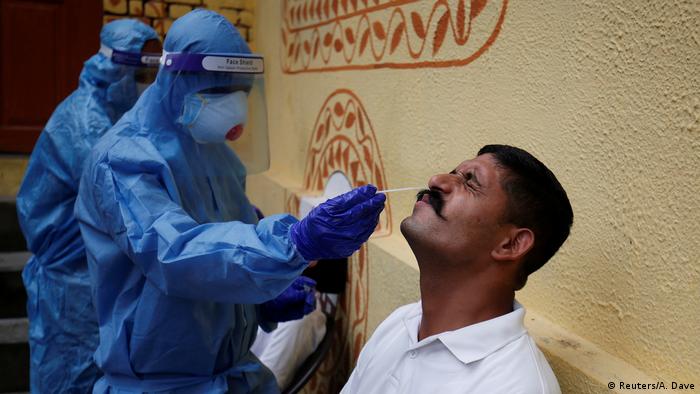 India is preparing for the daunting task of vaccinating its population of 1.3 billion

India became the second nation in the world to surge past 10 million coronavirus cases on Saturday, according to official data. The country reported over 25,000 infections in the last 24 hours. It has also reported 9.6 million recoveries and 145,136 deaths.

India's daily infections have significantly declined since September when the country was reporting nearly 100,000 cases per day and was on the way to surpassing the United States as the worst-hit nation.

While the pandemic has been on a downward trend in India, the US saw a surge in infections, reporting more than 200,000 daily cases in recent weeks.

India's milestone in COVID cases comes as the South Asian country prepares for the daunting task of vaccinating its population of 1.3 billion next year.

India is yet to approve any vaccine, but several companies have applied for authorization, including Oxford-AstraZeneca which has partnered with India's Serum Institute, the world's largest vaccine manufacturer.

Here's DW's overview of other major developments around the world.

President Benjamin Netanyahu became the first person in Israel to receive a coronavirus vaccine as the country launched it immunization program.

One of the first world leaders to get the jab, Netanyahu said he did it to set a personal example. Israel will begin vaccinating its health workers on Sunday.

The US Food and Drug Administration authorized Moderna's COVID-19 vaccine for emergency use on Friday, a week after it approved BioNTech-Pfizer's shot.

The vaccine will likely be used in harder-to-reach areas of the US due to the relative ease of storing its doses. This comes as the world's hardest-hit nation grapples with more than 3,000 coronavirus deaths a day.

Panama is to reimpose nationwide curbs on movement by requiring men and women to carry out festive shopping on different days, the health minister said on Friday.

"As of Monday 21, with the aim of reducing mobility, purchases will be made by gender," Luis Sucre, the Minister of Health, said in a televised message.

On Thursday, Panama reported 3,348 new cases and 42 deaths, a daily record for both new infections and deaths.

Germany has recorded a further 31,300 cases, taking the country's overall tally to 1,471,238, data from the Robert Koch Institute (RKI) for infectious diseases showed on Saturday. The reported death toll rose by 702 to 25,640.

Some 83% of Germans are planning on abiding by the special Christmas lockdown rules according to a poll carried out by YouGov for dpa. Among those aged 55 or over the share was 91%.

On Friday, the country revealed its list of who will get the new vaccine first. The nationwide program will begin on December 27.

Chancellor Angela Merkel appealed to people living in Germany to avoid meeting loved ones over Christmas and instead use video calls. She said service members stationed abroad regularly use virtual calls to get in touch with family and friends.

"Women and men stationed far away from home to ensure our security know what it means to have limited contact with loved ones," Merkel said in her weekly video podcast.

"They know what it means to only be able to Skype over a long period of time instead of being together," she said.

In Spain, entertainer Hector Fuentes has transformed an old shipping container into a production studio where he sends Christmas video messages to children dressed up as Santa Claus.

Parents can send their children's letters to Fuentes via social media. Fuentes then records personalized messages with the help of his son Andres and another colleague who plays his assistant elf.

"Our experts fear that the infection curve will increase during the Christmas period," Conte said

Under the new restrictions, shops, bars, and restaurants will be closed and travel between regions will be banned, and in theory, only one daily outside trip per household will be permitted.

Celebrations will be allowed until 10:00 pm.

The prime minister specified that the measures would be relaxed on December 28, 29, 30 as well as on January 4.

On these days, shops can remain open until 9:00 pm and people will be allowed to move about freely.

In Turkey, nine people were killed on Saturday after a fire broke out at an intensive care unit treating COVID-19 patients, state news agency Anadolu reported.

An oxygen cylinder exploded at the privately-run Sani Konukoglu Hospital in the southern city of Gaziantep, the report said.

Eleven patients at the unit were transferred to other hospitals for the duration of a probe into the explosion, Gaziantep Governor Davut Gul said on Twitter.

Austria will enter its third lockdown between December 26 and January 24, Chancellor Sebastian Kurz announced on Friday.

For the first three weeks, non-essential stores will close. Movement outside the home will once again be restricted to purposes such as buying food or taking exercise.

From January 18, stores and restaurants will open again for those who have tested negative and schools will resume face-to-face teaching.

Kurz said those who take part in a planned series of mass testing programs between January 15 and 17 will be allowed more freedom, such as visiting cultural events and eateries.

Journalist Klaus Prömpers told DW that Austrian ski resorts are set to open on December 24 but only to local residents.

"There will be no food, no drinks, no Apres-ski this season," due to the new closure of businesses in the Alps.

In Portugal, Prime Minister Antonio Costa will self-isolate for 14 days, spending Christmas at his official residence, after meeting earlier this week with French President Emmanuel Macron, who is infected with coronavirus.

Lisbon's regional health authority ARSLVT said in a statement that a working lunch between the two leaders on Wednesday was considered a "high-risk exposure."

Costa tested negative on Thursday, but ARSLVT said he would stay in isolation until December 29, which will be 14 days after he met with Macron in Paris to discuss Portugal's upcoming European Council presidency.

"After a meticulous review of the available information, Swissmedic concluded that the COVID-19 vaccine from BioNTech-Pfizer is safe and that its benefit outweighs the risks," the body said in a statement.

Switzerland, with its population of 8.6 million, has secured around 15.8 million COVID-19 vaccine doses, in deals with three manufacturers —  BioNTech-Pfizer, Moderna and AstraZeneca.

South Africa has detected a severe variant of the virus which could explain the rapid spread of a second wave that affects younger people, the health minister said Friday.

Known as the 501.V2 Variant, details have been sent to the World Health Organization, Zwelini Mkhize said in a statement.

Doctors have noticed that more coronavirus patients are younger, and do not always have other conditions that amplify the virus' effect, but are nonetheless suffering from more severe forms of COVID-19.

That "strongly suggests that the current second wave we are experiencing is being driven by this new variant," Mkhize added.

The research team has alerted authorities in Britain, who have "studied their own samples and found that a similar mutation ... was the variant that was driving their resurgence in London," he said.

South Korea has recorded 659 COVID-19 deaths, a comparatively low mortality rate attributed to aggressive tracing and testing, which minimized the strain on hospitals.

But the recent surge — stemming from widespread clusters across the country rather than the large, isolated outbreaks of the first two waves — has caused a severe shortage of hospital beds.

China will focus first on vaccinating high-risk groups over the winter and spring before widening the inoculation to the general public, a senior health official said on Saturday.

The country is planning to vaccinate as many as 50 million people before the start of the Lunar New Year holiday in February 2021, according to the South China Morning Post.

Beijing has included two candidate vaccines from Sinopharm and one from Sinovac Biotech Ltd in an emergency-use program for high-risk groups.

It has also approved a vaccine from CanSino Biologics Inc for military use but has not yet approved any jab for use among the general public.

Hong Kong has reported 109 new cases amid a new spike in the city's fourth wave of infections.

Among these, 102 were locally transmitted and seven were imported, according to health authorities. Forty-two of the new local cases had unknown origins.

Officials said Saturday they'll devote more personnel to ensuring that infected individuals and their contacts are placed under quarantine within two days of testing positive, after a 62-year-old woman died on Friday while waiting to go into quarantine.

Earlier in the day, police issued an arrest warrant for a 63-year-old COVID-19 patient who escaped the hospital isolation ward where he was being treated.

Parts of Sydney, Australia's most populous city, were heading into a lockdown that officials hope will be enough to control a growing outbreak in time for Christmas.

Residents in the city's northern beaches were ordered to stay home until midnight on Wednesday, except for essential reasons.

Hundreds of thousands of people in several suburbs are affected, with beaches, pubs and hotels closed starting Saturday evening.

"We're hoping that will give us sufficient time to get on top of the virus so that we can then ease up for Christmas and the New Year," said Gladys Berejiklian, the state premier of New South Wales of which Sydney is the capital.

The Sydney to Hobart yacht race, scheduled to take place from December 26-31, has been canceled following the outbreak in Sydney, race organizers said on Saturday.

"We are bitterly disappointed to cancel the race this year especially considering the plans and preparations we had put in place to have a COVID safe race," Cruising Yacht Club of Australia Commodore Noel Cornish said in a statement.