COVID: German regulations on who gets vaccine first | Germany | News and in-depth reporting from Berlin and beyond | DW | 18.12.2020

COVID: German regulations on who gets vaccine first

COVID-19 vaccinations are to begin in Germany on December 27 in Germany. and the government has said the over-80s and health care workers will be treated first. This plan immediately sparked controversy. 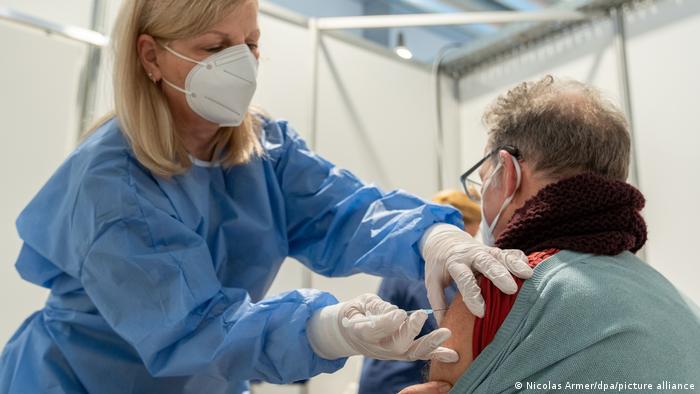 Germany is set to begin COVID-19 vaccines on December 27

The BioNTech-Pfizer vaccine has already been approved by various states, including the US and the UK, and is expected to be approved by the European Union in the coming days. Other approvals are imminent with Germany having placed preliminary orders with five different companies already. Vaccinations will begin mainly in care homes on December 27.

Spahn called for patience at a press conference on Friday to announce the vaccine plan, warning the population that "we will have to live with this virus for a long time yet."

The government plan identifies three top priority groups that are to be vaccinated first, each divided according to a number of sub-priorities.

2. Care workers who work in elderly people's homes or regularly look after the elderly or the mentally ill.

3. Health care workers with a high risk of exposure to COVID-19, especially those working in intensive care units, emergency rooms, and first responders.

4. Health care workers who primarily treat patients with a higher risk of dying from COVID-19.

2. Those with underlying health conditions that significantly increase the risk of dying from COVID-19. These include those with dementia or a similar mental health issue, those recovering from an organ transplant, and those with Down Syndrome.

3. Those who live or work in close contact with people in care or pregnant women.

4. Doctors and other health care workers who have a higher risk of exposure to COVID-19.

2. People with underlying health conditions that significantly increase the risk of serious illness from COVID-19. These include, but are not limited to, people with diabetes, cancer, chronic kidney or liver conditions, HIV or other immune-deficiency conditions, heart conditions, asthma, and clinical obesity.

4. Those vital to maintaining the state apparatus, including the government, police, fire departments, disaster relief, and parliamentarians.

5. Other critical infrastructure workers, including those maintaining power, water, and food supplies, telecommunication networks, the transport system, the pharmacy network, and refuse disposal.

7. Those in precarious part-time jobs, including meat-processors, and warehouse workers.

The German government expects 3-4 million doses to be available by the end of January, and 11-13 million doses by the end of March 2021. That means it is likely to take until March to immunize the first group alone, and it could take at least a year for the entire German population of 84 million to be vaccinated.

The government's plan deviates slightly from recommendations made on Thursday by Germany's vaccination commission (STIKO), part of the Robert Koch Institute (RKI) public health authority. The STIKO subdivided the population into five groups and did not set priorities within those groups, as the Health Ministry's plan does.

Criticisms from doctors and police

This last point — prioritizing within the groups — drew criticism from the German Ethics Council, an independent council of experts that makes recommendations on medical ethics issues, which said the subdivisions should be vaccinated simultaneously where possible.

Speaking to public broadcaster ZDF on Friday morning, Spahn countered this by saying that the division into three groups, "allowed a certain flexibility on the ground," and argued that the Health Ministry had adopted "99%" of the STIKO's definitions of the various groups.

Klaus Reinhardt, president of the German Medical Association (BÄK), criticized some of the priorities, telling the Rheinische Post newspaper that it was "risky" to put ordinary doctors so low on the list. Doctor's offices represented an "important protective wall for the already heavily burdened hospitals," Reinhardt argued.

There was similar criticism from police union DPolG, whose Bavaria chairman Jürgen Köhnlein said that police officers on the streets are often in close contact with many people and so represent a high-risk group.

Meanwhile the president of the German parliament, Wolfgang Schäuble, argued parliamentarians should be moved higher up the priority list on the grounds that the state should remain "capable of acting."

The opposition Free Democratic Party (FDP), meanwhile, has demanded that the Bundestag be given a say in setting out a vaccination law: "Legal decrees are fine when the issue is a technical procedure, but this is a matter of life and death, which is why there has to be a law that can be debated in the Bundestag," said the FDP's Stephan Thomae, whose party is introduced a vaccination plan bill on Thursday.

The coronavirus continues to spread rapidly throughout Germany, with the RKI reporting 33,700 new infections in the last 24 hours, and 813 new deaths.

How other countries vaccinate

The UK became the first country to approve the BionTech-Pfizer vaccine in early December, and has already vaccinated some 130,000 people, the BBC reported this week.

It prioritized over-80-year-olds already in hospital, those living in care homes and their workers, as well as front-line hospital workers. They are to be followed by vaccinations for the over-70s and those clinically vulnerable to the virus.

US authorities approved the vaccine for emergency use on December 12, with the federal government saying it plans to immunize 20 million health workers and care home residents before the end of the year. Each state has come up with its own vaccine plan.

China is reported to be working on at least five vaccines simultaneously, with one, produced by the private company Sinovac, apparently already being rolled out despite not yet completing late-stage trials. In late November, the state-owned company Sinopharm said it had already administered an experimental vaccine to a million people, including government officials, students, and workers traveling abroad.

Russia began administering its Sputnik V vaccine in Moscow on December 5, making it available to health care workers, teachers, and social workers first. But unlike in other countries, the elderly have been placed on lower priority: The age of those eligible for the vaccine has been capped at 60.