The German chancellor has voiced her appreciation for BioNTech, the small German firm behind the first coronavirus vaccine to get regulatory approval. Merkel said the shot will save "many lives." 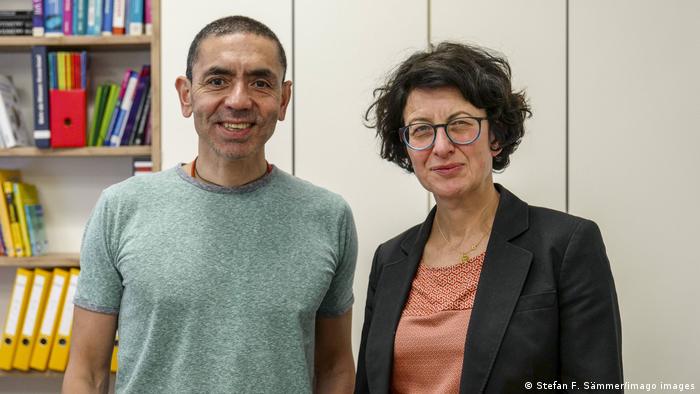 German Chancellor Angela Merkel praised the accomplishments and tenacity of BioNTech researchers who developed the first coronavirus vaccine to be approved in western countries.

The comments came during a digital meeting on Thursday between Merkel and the BioNTech founders Ugur Sahin und Özlem Türeci.

"We are incredibly proud to have such researchers in our country," Merkel said at the start of the talks.

Sahin and Türeci faced many hurdles in their road to getting the mRNA technology behind the vaccine to be recognized, but did not give up.

"You didn't throw in the towel. You believed in your research," Merkel said.

The chancellor noted that the vaccine, which was developed in partnership with US pharma giant Pfizer, represents a major step in turning the tides of the coronavirus pandemic.

"When we see how many people are currently dying from the coronavirus, then we know how many lives this can save," Merkel said.

BioNTech founders Ugur Sahin und Özlem Türeci are a husband and wife team who started the small biotech firm in the German city of Mainz in 2008.

Türeci, the firm's chief medical officer and a leading cancer researcher, said it was important for the company to work as quickly as possible without sacrificing scientific and ethical standards.

"The mission was to make possible what seemed impossible," she said.

The first step towards bringing the pandemic under control has been reached, "but the marathon isn't over," Türeci added.

Sahin, the company's chief executive, thanked the German government for its support but also thanked BioNTech's staff for working tirelessly for months on the vaccine.

"We were only able to do this because we have a fantastic team. A team of international scientists and staff from 60 different countries who have been working with us for years on this topic [mRNA research]," he said. Sahin emphasized that another crucial component in developing the vaccine quickly was being able to link up with companies and researchers around the world.

"We know that we cannot defeat this pandemic alone," he said. "International cooperation is key."

Based in the city of Mainz, the previously unknown biotech firm jumped into the global spotlight in November when the BioNTech-Pfizer vaccine was announced to be nearly 95% effective in preventing COVID-19.

Although already approved in the United States and the United Kingdom, the BioNTech-Pfizer vaccine has yet to be approved on the European market.

German Health Minister Jens Spahn, who was also part of the video call with the BioNTech founders, said he expects EU states to start vaccinating the same day the vaccine is approved.

"In Germany we will start, if the approval comes as planned, on December 27. The other countries in the EU want to be able to start and want to start from December 27," he said.