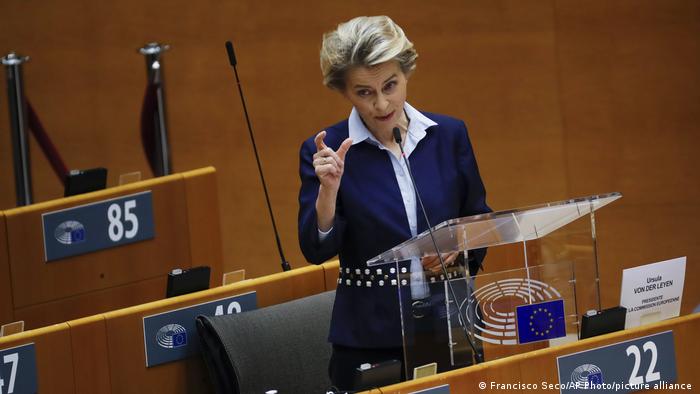 With pressure mounting on the European Medicines Agency (EMA) to speed up its review of the new BioNTech-Pfizer coronavirus vaccine, EU Commission President Ursula von der Leyen told European parliamentarians that all 27 member states could be able to begin vaccination programs on the same day, possibly before Christmas.

Her speech to the bloc's lawmakers stressed unity and hard work ahead. Noting that the EMA has decided to expedite its hearing on the efficacy and safety of the BioNTech-Pfizer vaccine from December 29 up to the 21st, von der Leyen expressed confidence that the virus could be beaten.

She noted that the BioNTech-Pfizer vaccine was the first of six to be reviewed, all of which the bloc has already ordered to be able to administer each as soon as they are approved for use. "Finally, within a week, the first vaccine will be authorized so that vaccinations can start immediately and more will follow in the new year," she said.

Von der Leyen also released a tweet expressing the need for unity: "This is a huge task. So let's start rapidly with the vaccination together, as 27, on the same day. As we have been united through the pandemic, we will get out of it together & united."

On Wednesday evening local time, Germany announced it aims to roll out the BioNTech and Pfizer vaccine against the coronavirus on December 27, the Berlin city government stated. The announcement followed a meeting between Health Minister Jens Spahn and health officials from Germany's 16 federal states.

It is not known whether this will be the same date as the other 27 member states.

Priority will given to seniors in care homes, Berlin city government announced.

Also Wednesday. French Prime Minister Jean Castex said that France could begin vaccinations "in the last week of December" if "all conditions are met."

Although individual EU member states have the option of issuing emergency authorization of the vaccines, the bloc has, until now, resisted such moves, preferring instead to act as one — abiding by a somewhat lengthier but more solid review period — to make sure that every country is treated the same.

EU Commission Vice President Margaritis Schinas echoed von der Leyen's optimism, saying, "This vaccine will be a Christmas gift for all Europeans if all goes well."

Though Michael Roth, Germany's Minister of State for Europe, urged caution: "We need to also be careful that we don't succumb to political pressures when it comes to the authorization processes." Roth said it was important to get the vaccine rollout right rather than being first.

Pressure has mounted within the EU as the UK, Canada and the US have already begun administering the German-US vaccine.

Von der Leyen also addressed the issue of ensuring low and middle-income countries have access to the potentially life-saving vaccine. She told parliamentarians, "In total, we have bought more than enough doses for everyone in Europe. And we will be able to support our neighbors and partners around the world through COVAX so that no one is left behind."

The COVAX initiative was launched by the World Health Organization (WHO), the European Union and France to provide all countries access to safe and effective vaccines.