Fact-check: Will poor countries miss out on COVID-19 vaccinations? | World | Breaking news and perspectives from around the globe | DW | 10.12.2020

Fact-check: Will poor countries miss out on COVID-19 vaccinations?

The internet is rife with claims that affluent countries have enough doses to vaccinate their populations up to three times, but it might not be that simple. DW takes a look at some of the assertions. 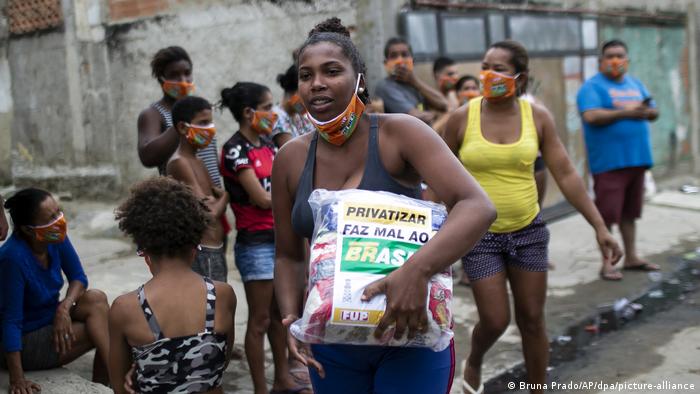 When will the vaccines arrive in poorer areas like this favela in Rio de Janeiro?

Nine out of 10 people in poor countries are unlikely to receive a COVID-19 vaccine next year as the world’s richest nations snap up a majority of the shots, according to The People’s Vaccine Alliance, a network of organizations including Amnesty International, Global Justice Now and Oxfam. While such a statement makes for an attention-grabbing headline, there’s much more to the situation than meets the eye.

Major vaccine developers, including AstraZeneca, BioNtech/Pfizer and Moderna, estimated that they could produce up to 5.3 billion doses of their vaccinations in 2021. As current tests indicate that these require two separate doses to be considered effective, the total amount produced could be enough for a little over a third of the world’s 7.6 billion people.

With that comes a question of how vaccinations are assigned to different countries. Many affluent nations have rushed to buy up their share, triggering accusations of ignoring the countries that can’t afford to do the same.

Critics say they have enough doses to vaccinate their entire population multiple times, that richer countries are blocking access for poorer ones, and vaccination producers are putting profits over health. DW's Fact Check team looks at the bigger picture to show that these explanations may not be sufficient.

Do western countries have enough doses to vaccinate their population several times over?

Rich nations, representing just 14% of the world’s population, have reportedly bought up 53% of all the most promising vaccines so far, giving wealthier nations the capacity to vaccinate their entire populations three times over.

This is misleading. The claim assumes that all vaccines will pass clinical trials and be approved. Although more affluent countries have signed agreements with leading vaccine developers, the global scramble to secure doses occurred well before their safety and efficacy were established. While doses have been reserved, this does not necessarily mean that all companies will produce an effective vaccine that is then approved. In short, doses have been reserved for vaccines that are still being tested.

An example: Canada tops the chart of countries that have access to enough doses to vaccinate their population five times over, according to The People’s Vaccine Alliance. This also lines up against information provided by the Canadian government, showing that the country has secured up to 414 million doses of the COVID-19 vaccine candidates across seven different companies.

This information also comes with a government disclaimer, "all vaccine candidates must go through pre-clinical and clinical trials. Health Canada will continue to review evidence of safety, efficacy, and manufacturing quality for each vaccine candidate as it becomes available to decide whether the product will be approved for use in Canada."

With this in mind, Canada’s biggest orders consist of "up to" 76 million doses from each of three of the largest producers. If only one company is proven to have an effective vaccine, this would still ensure Canada’s 37.6 million population would be able to each receive the two recommended doses of the vaccine.

"Current models predict that there will not be enough vaccines to cover the world's population until 2023 or 2024," according to Duke Global Health Innovation Center. Oxfam’s Health Policy Manager, Anna Marriott, echoes this, "unless something changes dramatically, billions of people around the world will not receive a safe and effective vaccine for COVID-19 for years to come," she told Amnesty International.

With that in mind, countries have been working to ensure vaccinations are fairly distributed to those who need them most. While this happens, many are questioning whether poorer countries who can’t afford to buy up a lot of vaccines will be left out.

While poorer countries don’t have such easy access to vaccines, they haven't been brushed aside entirely so affluent countries can get vaccines first. Efforts are being made to ensure everyone can get access.

That’s where the COVAX pool comes in. Co-led by the Global Alliance for Vaccines and Immunizations, the Coalition for Epidemic Preparedness Innovations and the World Health Organization, it aims to accelerate the development and manufacture of COVID-19 vaccines and guarantee fair and equitable access around the world.

COVAX aims to provide 2 billion doses by the end of 2021 for high-risk populations. Long term, its goal is to provide funded countries with enough doses to cover 20% of their population, while self-financing countries can purchase different levels of population coverage. 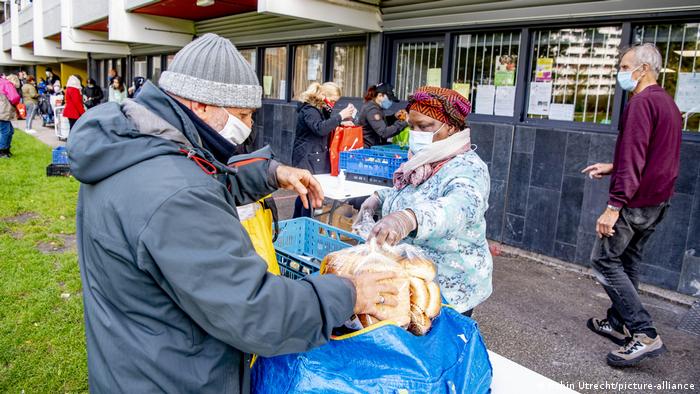 Even in richer countries like the Netherlands the pandemic increases poverty

Essentially, the program aims to provide governments with access to a portfolio of potential vaccines which are produced by multiple manufacturers across the world.

A majority of high-income countries have committed funding to COVAX, allowing 92 low- and middle-income countries eligible through the Advance Market Commitment (AMC) to be covered as funded countries. Nonbinding confirmations represent those who have confirmed interest but have not made a binding financial commitment.

Pfizer and BioNTech say they have expressed interest in supplying doses to the COVAX Facility, and Oxford/AstraZeneca has pledged 64% of their doses to people in developing nations.

The European Union has also announced that it will contribute €500 million ($605 million) in grant funding to support the COVAX Facility to secure access to future COVID-19 vaccines in low and middle-income countries.

At this stage it looks like some poorer countries will get access to vaccinations, however it could be years before that procedure is rolled out.

Read more: How to distribute the coronavirus vaccine around the world?

This graphic was updated on December 11

There’s a lot of conflicting information online about whether vaccine producers are just lining their pockets, or trying to do good for the health of the public. Whichever is the case depends on who you ask. The People’s Vaccine Alliance, who were behind the press release which resulted in recent headlines about vaccine inequity globally, has been clear about its demands from vaccination producers. It says "all vaccines, treatments and tests must be monopoly-free, mass produced, distributed fairly and made available to all people, in all countries, free of charge."

The idea is that pharmaceutical corporations and research institutions would share the science and intellectual property behind their vaccine so safe and effective doses can be produced all over the planet. Essentially, the argument goes that any vaccination should be open-source.

"The longer-term goal must be to build sustainable vaccine manufacturing capacity within low- and middle-income countries. This requires a support system leveraged through the WHO and associated organizations such as Gavi to provide regulatory guidance and access to new formulations through this open source process," argue Professors Charles M. Schweik and Timothy Ford in an article for the Conversation.

Medecins Sans Frontieres (Doctors Without Borders) said that while AstraZeneca has committed to not profiting from its vaccine "during the pandemic" it would be able to raise prices as early as July next year. AstraZeneca CEO Pascal Soriot said that the company will "treat the development of the vaccine as a response to a global public health emergency and not a commercial opportunity." Johnson & Johnson also said that it will make its vaccine available on a not-for-profit basis.

The situation is not the same with Pfizer, which turned down US government funding and used almost $2 billion (€1.6 billion) of its own money to develop its vaccine, according to the Guardian. "So there’ll be profit on it, but it’s probably not going to be like a typical drug margin that you would see for other products coming from Pfizer," Damien Conover, director of healthcare equity research and equity strategy at financial services company Morningstar, told Marketplace. Overall, it’s different for different vaccination producers and the financial details are expected to remain murky until the vaccines have actually been fully produced and approved.

A jump in coronavirus infections in Germany is "worrying," the head of the country's disease control agency said. The Robert Koch Institute chief said people in Germany may face tighter lockdown restrictions.

The pandemic could push as many as 32 million people in the world's least developed countries into extreme poverty, a new UN report has said. Without international action, global development goals will be missed.

World food prices have risen for the sixth month in a row, hitting the "highest level since December 2014" according to the FAO. A UN report said the coronavirus pandemic has been a major driver of food inequality.