The pandemic could push as many as 32 million people in the world's least developed countries into extreme poverty, a new UN report has said. Without international action, global development goals will be missed. 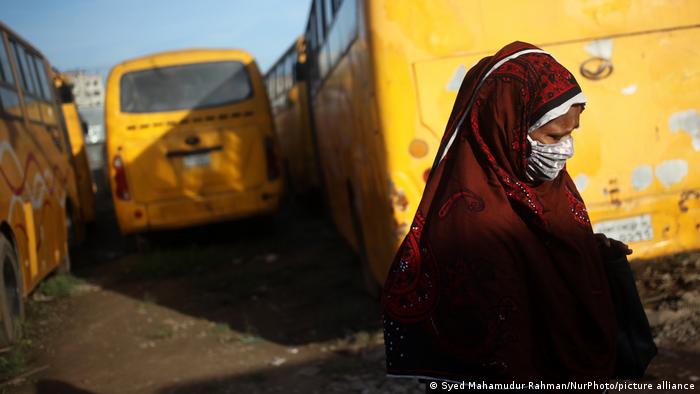 The world's least developed countries (LDCs) will experience their worst economic performance in 30 years in 2020 due to the coronavirus pandemic, the United Nations Conference on Trade and Development (UNCTAD) said in a report released Thursday.

In its Least Developed Countries Report 2020, the intergovernmental body, which seeks to help developing economies navigate a globalized economy, predicted that falling income levels, widespread unemployment and growing fiscal deficits caused by the pandemic could push as many as 32 million people into extreme poverty in the 47 countries designated as "least developed."

While the initial health impact of the coronavirus has been less severe in these countries than many feared, the economic impact has been devastating, the report said. Economic growth forecasts for these countries were revised down from 5% to -0.4% between October 2019 and October 2020, which is expected to lead to an overall drop in per capita income of 2.6% in 2020.

"The least developed countries today are undergoing the worst recession in 30 years," UNCTAD Secretary-General Mukhisa Kituyi wrote in a foreword to the report. "Their already low standards of living are falling. Their stubbornly high poverty rates are rising further, reversing the slow improvement they had achieved prior to the pandemic. Progress towards achievements on nutrition, health and education are being undone by the onslaught of the crisis."

Experts believe that previous experience handling epidemics as well as demographic factors including lower population density and a relatively young population helped many LDCs to weather the first months of the coronavirus outbreak. But the UNCTAD cautioned that a future surge in the spread of coronavirus in LDCs would pose a shock to health care systems, which remain underdeveloped.

Victims of the global economy

The global economic recession has likely had a greater impact on LDC economies than the domestic market downturn. A major slump in global demand for products from these markets has depressed the prices of key exports. Countries whose economies depend heavily on the export of a few products, like minerals and metals or garments, have experienced particularly bad shocks as foreign trade prices and volume fell suddenly.

A prolonged economic crisis could also cause permanent job loss and threaten entrepreneurship in a way that would seriously harm future output potential in these countries, the report said.

Global poverty levels and food insecurity are also expected to go up, with temporary bouts of poverty becoming prolonged. The share of people in LDCs living below the $1.90 (€1.57) per day poverty line is expected to rise 3 percentage points to 35.2%, representing an additional 32 million people, the report said.

"The least developed countries have deployed their limited means to counter the recession, but they find themselves the countries the worst hit by a crisis for which they are not responsible, similar to their situation vis-à-vis climate change," said Kituyi. "This is an injustice which needs to be redressed."

The situation in LDCs poses a particular risk to global health, education, and sustainability goals, the report said. Populations may be pushed to detrimental coping strategies, including reducing consumption of healthy food and pulling their children out of school.

Supporting LDCs will be key to reaching global targets laid out in the 2030 Agenda for Sustainable Development, which aims to achieve a sustainable and more equitable future for the global human population. Goals include the eradication of poverty.

Rebuilding these economies post-COVID will be especially difficult if their production capacities — already low before the pandemic — are not improved, the report said. A country's productive capacity is its ability to produce goods and services and achieve growth and development.

Improving this sphere will allow LDCs to overcome the structural barriers that form the source of their vulnerability, UNCTAD argued in the report. These include widespread poverty, overdependence on imports of critical goods and services, and overly concentrated export markets.

To this end, Kituyi called for the international community to support these vulnerable economies with an action plan to target the development of productive capacities there.

"This is the only way to ensure sustainable development and overcome the long-term development challenges of the least developed countries," he wrote.