The world economy will make a spectacular comeback aided by vaccine rollouts and government support, the OECD says. But by then, the pandemic will have dealt some painful, enduring blows in many countries.

The global output will return to pre-pandemic levels by the end of 2021 after witnessing a sharp 4.2% decline this year, the Organization for Economic Co-operation and Development (OECD) said in its economic outlook released on Tuesday.

The 37-member OECD projects global GDP to rise by around 4.2% in 2021 and by a further 3.7% in 2022, helped by COVID-19 vaccine rollouts and accommodative fiscal and monetary policies. The recovery will be led by China, which is forecast to grow by 8% next year, accounting for over one-third of world economic growth.

Currently this year the world economy is on course to plunge into its worst recession since the Second World War as the coronavirus forced half the world's population to remain indoors, virtually shutting global businesses, trade and travel. Any hopes of a quick recovery were dashed by subsequent waves of the virus, which has killed about 1.5 million people.

"For the first time since the pandemic began, there is now hope for a brighter future. Progress with vaccines and treatment have lifted expectations and uncertainty has receded," OECD Chief Economist Laurence Boone said.

Over the past few weeks, three COVID-19 vaccines have been found to be safe and effective in their clinical trials, including one developed by AstraZeneca and the University of Oxford, which has so far witnessed the maximum interest from governments and organizations worldwide. 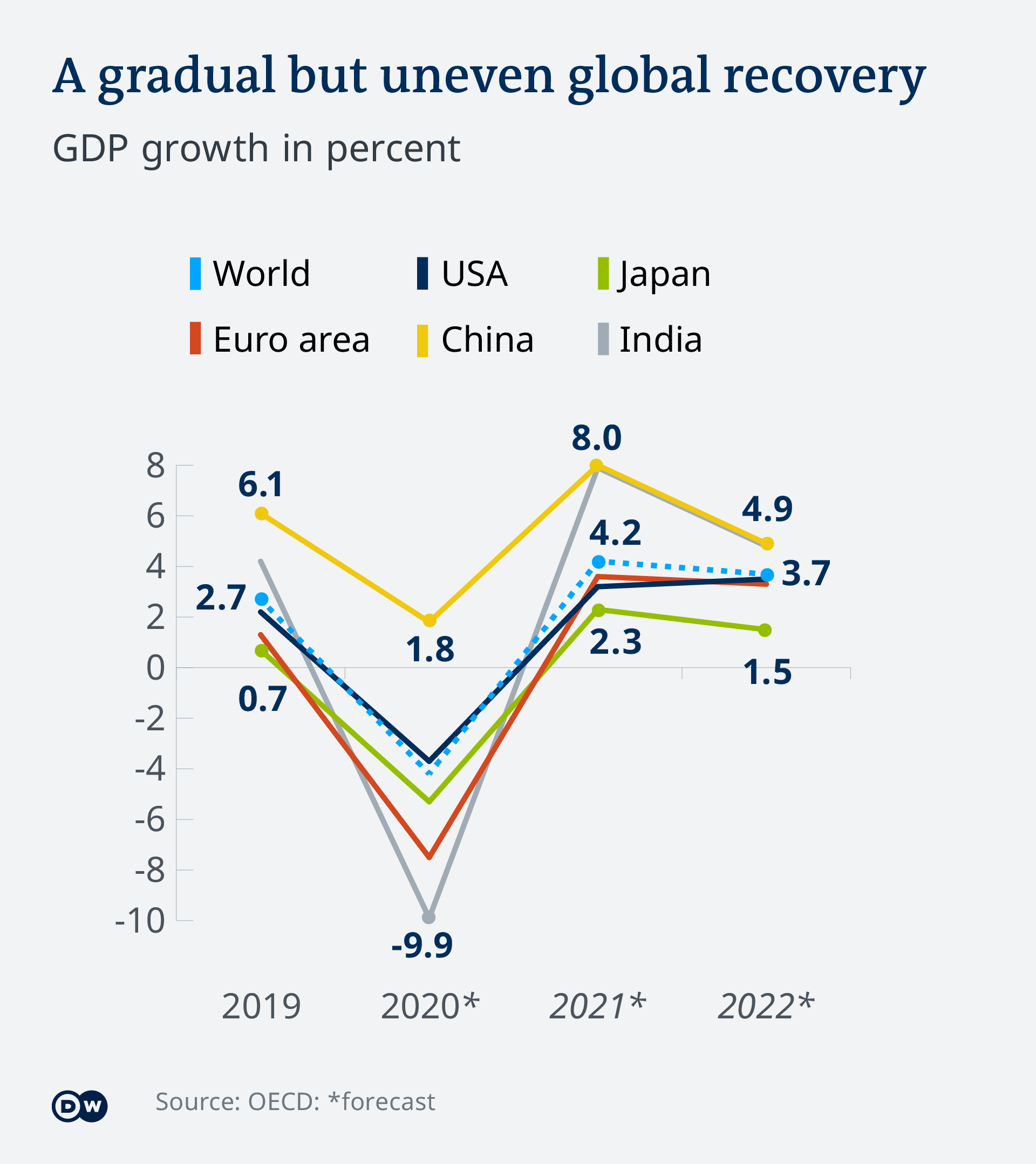 COVID-19 to cause permanent damage

The OECD has cautioned that the recovery will be uneven across countries. The countries with effective test, track and isolate systems, where vaccinations will be deployed rapidly, will likely perform relatively well. The output in many other countries is projected to remain around 5% below pre-crisis expectations in 2022.

The economic fallout is expected to disproportionately hurt the most vulnerable, dealing long-lasting blows in most cases. Smaller firms and entrepreneurs are more likely to go out of business. The unprecedented adoption of digital technologies with people being asked to work from home and schools and universities taking their classes online during the lockdowns is only expected to set children and youth from less well-off backgrounds back by years.

"Despite the huge policy Band-Aid, and even in an upside scenario, the pandemic will have damaged the socioeconomic fabric of countries worldwide," Boone said.

Keeping the money taps on

So far the global recovery has been supported by trillions of dollars pumped in by governments and central banks. The OECD has stressed that the money taps must be kept open, despite the breakthroughs on the vaccine front.

Governments should continue to invest in public health measures to limit the impact of renewed virus outbreaks and carry on supporting firms and jobs to ensure a faster rebound when restrictions are lifted, the report said.

The report also found that a bigger fiscal stimulus did not always translate into better economic performance, suggesting not all measures have been used "wisely." Boone said monetary and fiscal support must be funneled into stronger and better economic growth with investments in education, health, physical and digital infrastructure being a priority.

The pandemic is expected to push 88 million to 115 million people into extreme poverty — defined as living on less than $1.90 (€1.60) a day — this year, according to the World Bank. Governments should make reversing this trend and bridging income inequality their priority, Boone added.

The OECD has called for greater cooperation among countries in the fight against the coronavirus, including on matters such as the distribution of vaccines and extending debt relief to poorer countries.

"The pandemic is the first fully global crisis since World War II. It has been answered by massive national responses, but closed borders and little cooperation," Boone said. "Protectionism and shutting frontiers are not the answer."