Moderna applies for emergency US approval of COVID vaccine

New study results found that the shots had an efficacy rate of 94.1%. The company says doses of the vaccine could be delivered to the EU as soon as December, if it receives approval in Europe. 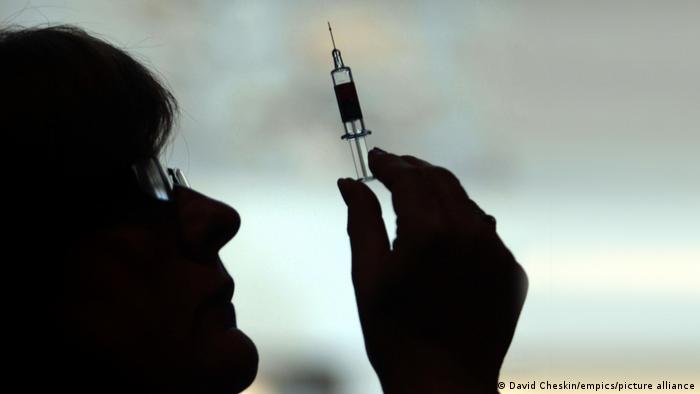 US pharmaceutical firm Moderna said it had filed requests for emergency authorization of its COVID-19 vaccine with US regulators on Monday, after new study results found that the shots had an efficacy rate estimated at 94.1%.

The company said earlier in the day it would also "apply for a conditional marketing authorization with the European Medicines Agency (EMA)."

The announcement could prove another step forward in the race to begin limited vaccinations, as infection rates around the world continue to rise.

Moderna says it has already initiated so-called rolling review processes with the EMA, as well as regulatory authorities in Canada, Switzerland, Britain, Israel and Singapore, aimed at speeding up authorization. Earlier interim results said it was 94.5% effective against the virus. The company says the vaccine trials have so far raised no serious safety concerns.

With its application, Moderna will become the first pharmaceutical company to apply for authorization of its vaccine in the EU. Last week, European Commission President Ursula von der Leyen announced that the EU had concluded a contract for up to 160 million doses of the Moderna vaccine.

The contract foresees an initial delivery of 80 million vaccine doses, with the option of 80 million additional doses at a later date. Moderna says its vaccine could be delivered to the EU as early as December, if it receives approval.

Could be delivered to EU by December

Meanwhile, Moderna said the shots' effectiveness and good safety record so far — with only temporary, flu-like side effects — mean they meet requirements set by the US Food and Drug Administration (FDA) for emergency use before the final-stage testing is complete.

Multiple vaccine candidates must succeed in order to distribute vaccines across the world.

The company is just behind Pfizer and its German partner BioNTech in seeking to begin vaccinations in the US in December. Across the Atlantic, British regulators also are assessing the Pfizer shot and another from AstraZeneca.

Vaccines made by three Chinese companies and a Russian candidate also are being tested in countries around the world.

EMA urges lawmakers to be patient

A medical expert from the European agency dealing with Moderna's request for authorization of its vaccine has called for patience in an interview with DW.

EMA board member Yannis Natsis told DW: "I don't speak on behalf of the agency, but my message would be that we need to let the regulators do their job."

Nevertheless, he said the data from Moderna was "very promising" and that the vaccine, when it is available for public use, will be "safe and effective" though the Belgian cautioned that "we will have to keep a close eye" on developments as the shots are distributed so that the authorities can "gather more information on efficacy" and "safety profile."

And Natsis said that lawmakers across Europe needed "to be more cautious when they they go on the record with different statements, different timelines."

COVID-19 vaccines on the cusp of rollout

The UK has appointed a vaccine minister amid reports that British hospitals could receive the first doses within 10 days. Scores of people have been arrested at fresh anti-lockdown protests. Follow DW for more.