The UK has appointed a vaccine minister amid reports that British hospitals could receive the first doses within 10 days. Scores of people have been arrested at fresh anti-lockdown protests. Follow DW for more. 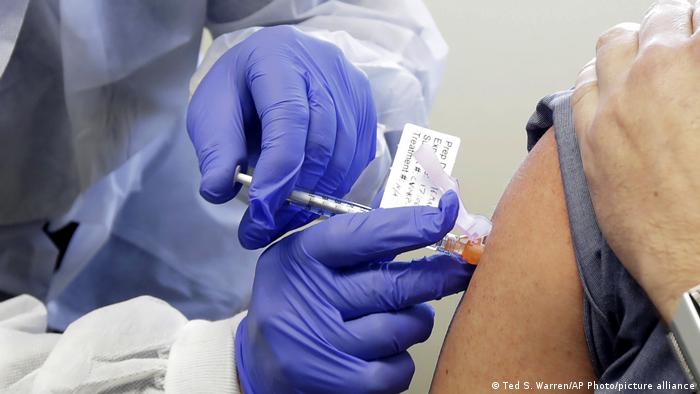 Britain on Saturday appointed a vaccine minister as it prepares to inoculate millions of people against the virus, potentially starting within days.

The announcement was made as the Financial Times reported that the UK is set to approve the BioNTech Pfizer vaccine next week.

The UK medicines regulator is also assessing another vaccine by Oxford University and AstraZeneca to see if they are safe and effective.

The Guardian newspaper reported that hospitals have been told they could receive the first doses of the Pfizer shot the week of December 7, if it receives approval.

About 60% to 70% of the population needs to be immunized against the coronavirus in order to achieve herd immunity, the World Health Organization (WHO) has announced.

This rate is based on several modeling studies, the head of the WHO's vaccine department, Katherine O'Brien, told a press conference in Geneva.

WHO spokesman Mike Ryan also said it would be "highly speculative" to say that the virus did not emerge in China. Chinese state media has been reporting that the virus, which was allegedly first discovered in a food market in the city of Wuhan, actually originated abroad.

Canadian Prime Minister Justin Trudeau said that the Canadian military will play a leading role in distributing the coronavirus vaccine, when it is ready. Officials are concerned about reaching far-flung regions, particularly in the sparsely-populated north of the world's second-largest country.

In the United States, Black Friday crowds were diminished. Traditionally the biggest shopping day of the year, retailers moved online. Large shops like Walmart sent out staff to manage numbers in stores and take customers' temperatures.

California’s Los Angeles County has banned close to all social gatherings involving individuals from more than a single household starting Monday. The restrictions will be in place for at least three weeks.

The order does not include religious services and protests, which are protected under the US constitution. It will affect nearly 20 million people who live in and around Los Angeles, the US’ second-largest city.

The Serum Institute of India — the world's largest vaccine manufacturer by volume — said on Saturday that it would apply for an emergency licence for the Astrazeneca-Oxford vaccine within two weeks.

The Serum Institute, which is the manufacturing partner for "Covishield," said it would be able to produce at least 100 million doses a month from early 2021.

India will be given the first priority for the delivery of the vaccine and then the focus will be on the 150-plus countries in the Covax alliance that have agreed to work jointly on the distribution of the vaccine, the Institute said.

Earlier, AstraZeneca had said more research was required on "Covishield" after scientists raised concerns about the vaccine's efficacy,  but the US-based pharma giant also stressed the results will not affect regulatory approval.

North Korean hackers have regularly attempted to hack South Korean labs for information about a potential vaccine, Seoul has said. Lawmakers said the cyberattacks had been unsuccessful so far.

A seventh member of Pakistan’s cricket team has tested positive for the virus, according to New Zealand's Ministry of Health. The team is currently in New Zealand for three Twenty20 internationals and two test matches.

"One additional member of the Pakistan squad has today tested positive during routine testing. The remainder of the results from the squad's Day 3 swab testing - apart from the six who have already returned a positive result, are negative," the ministry said.

Six people from the 53-member group tested positive upon arrival.

Police in the UK say they made 155 arrests as they tried to break up anti-lockdown and anti-vaccine protests in London on Saturday.

The arrests had been made for different offenses including assaulting a police officer, possession of drugs and breaching coronavirus restrictions. England's current lockdown ends on December 2. London's Metropolitan Police said they had intercepted and turned back coaches full of people wanting to join the demonstrations.

"We have three to four long winter months ahead of us," he was quoted as saying. "It is possible that the restrictions will remain in place in the first months of 2021."

On Wednesday, Germany's 16 federal states agreed to extend and tighten measures against the pandemic until at least December 20.

The number of virus patients in intensive care has soared from around 360 in early October to more than 3,500 last week.

Just over 50% of Germans want to be vaccinated against the virus, a survey commissioned by health insurance company Barmer found.

The survey found that 42% of people with children said they intended to have their children vaccinated as well.

Ireland has announced it will ease its lockdown next week, allowing restaurants and gyms to reopen. Travel will be permitted from December 18, allowing a "different but special" Christmas, Prime Minister Micheal Martin announced.

The country was under a six-week lockdown, starting October 21, which stopped people from traveling beyond 5 km from their place of residence. All non-essential workers were to work from home and all non-essential retail and leisure facilities were closed.

Belgium will also ease its lockdown from December 1.

A German doctor on trial in Munich for anti-doping offenses has offered up two of his special fridges to store coronavirus vaccines. The prosecutor welcomed the offer of the fridges, which can each hold around 10,000 doses of the vaccine, but said: "I don't want to belittle your heroism, but you wouldn't have got the equipment anyway."

Some African and Asian countries have considerably lower numbers of coronavirus cases than Germany. What is the reason for that and what lessons might Germany – and other countries – learn from them?