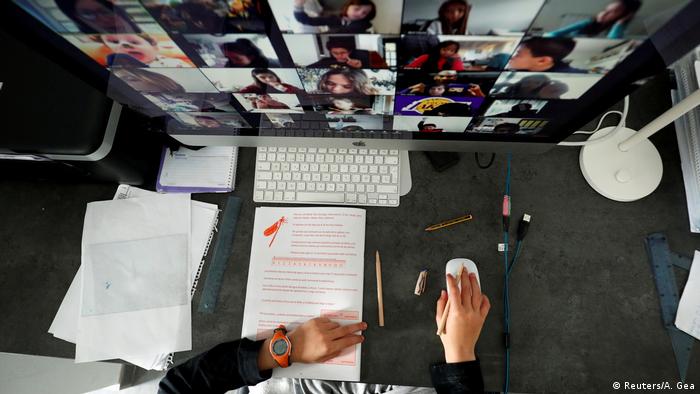 The world is witnessing one of the swiftest organizational transformations in history as governments and businesses rely heavily on the internet to minimize the disruption caused by lockdowns and other sweeping measures to contain the coronavirus.

The past few weeks have seen an unprecedented adoption of digital technologies with people being asked to work from home, schools and universities taking their classes online, doctors and patients turning to telemedicine and political leaders attending virtual summits.

Digital tools such as apps and smartphone data are also being used to check the spread of the virus, while tech companies, including Alibaba and Tencent in China and IBM, Google and Microsoft in the US, are deploying their high-performance computer capabilities to help researchers collaborate as they look for a cure for the disease.

But, this increasing reliance on digital platforms has exposed the deep divide between the technology haves and have-nots both within countries and between countries, Torbjörn Fredriksson, the digital economy head at the United Nations Conference of Trade and Development (UNCTAD), told DW.

He cites the example of the elderly people even in the most advanced countries, who are most vulnerable to the disease but may not be digitally well-equipped to access all the real-time information being disseminated online to respond to the COVID-19 outbreak.

Looking across countries, it's evident that many of the digital tools being deployed in the developed world to deal with the pandemic such as online conferencing tools, virtual classrooms and online shopping may not be easily applicable in most developing and least developed countries, which have limited access to the web, making them especially vulnerable once the crisis hits them head-on.

"Once companies, organizations and governments shift more and more to digital solutions to cope with social distancing, travel bans and other lockdown effects, they will learn to use digital technologies in new ways that they were not used to before," Fredriksson said. "So, once the economy picks up again, we will see a more digital economy and a more digital society in countries that have been able to take advantage of the digital tools, but the countries that are not so ready to do that right now will fall further behind as a result."

Just one in five people use the internet in the least developed countries even as more than half of the world's population is connected to the web, UNCTAD data shows. In the poorest countries, less than 5% of the population shops online compared with 60-80% in advanced nations. A vast majority of online shoppers in these countries choose to pay in cash upon delivery as opposed to paying digitally upfront.

"This is not what you want to have now in a situation where you're supposed to distance yourself from other people," Fredriksson said.

Poor access to internet and other digital platforms makes it almost impossible for the poorest countries to harness the potential of digitalization in the manner their more developed peers are doing during the crisis.

"We need to start giving full attention to the digital dimension of economic resilience of countries, whether it's dealing with a natural disaster, a health crisis or any other crisis facing them," Fredriksson said. "As long as they lag very far behind in terms of what we call digital readiness, it's very difficult for them to use these tools in coping with the problems." 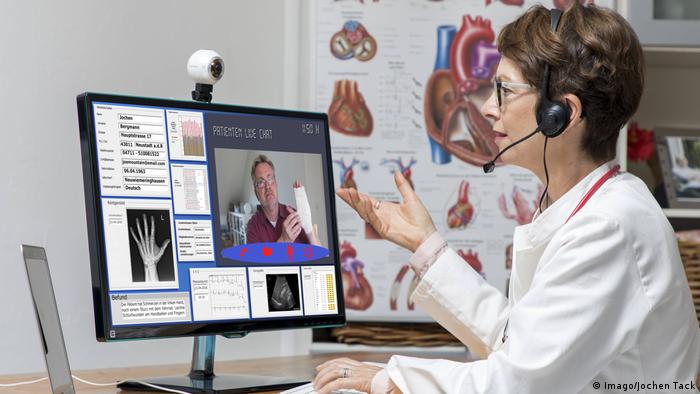 Telemedicine is getting a boost amid the coronavirus crisis, but the technology and equipment needed for this is not available everywhere on the planet

The pandemic has also laid bare the growing digital divide between traditional manufacturing and service-delivery jobs like those in auto companies, restaurants and hospitals and the so-called knowledge worker jobs in IT and banking sectors. The divide between traditional firms and modern, agile technology companies also stands exposed. So, while auto companies have been forced to shutter plants to fight the virus, IT and financial firms have continued to operate without much ado.

"These differences have been sharpened by COVID-19 as digital work is much easier to virtualize than traditional physical work," Marco lansiti, professor of Business Administration at Harvard Business School, told DW. "Now, our ability to work from home, sequestered from busy places, is enabling us to avoid infection and risk all kinds of complications. This is already causing stress and even unrest as people who are needed to make basic things run are putting themselves in danger to provide health care or deliver groceries."

"Our economy does not run on digital firms alone, and the divide between digital and traditional work has been deepened dramatically, literally making the difference between health and sickness," said lansiti, who has advised technology companies such as Microsoft, Facebook, and Amazon.

The rapid virtualization of jobs and services is likely to strengthen the market positions of a few megadigital platforms, a UNCTAD analysis showed. The UN body said in a 2019 report the world's top seven digital platforms — Microsoft, Apple, Google, Facebook, Amazon, Tencent and Alibaba — already accounted for two-thirds of the value of digital platforms globally in 2017.

Microsoft said last month the number of people using its software to aid remote working soared 40% in a week. Facebook is also witnessing a surge in traffic for video calling and messaging. In China, demand for digital tools from WeChat, Tencent and Ding jumped after a lockdown was imposed in January.

Fredriksson says one key aspect to emerge from the current crisis is that the internet has shown to be robust despite a major rise in traffic as more and more people take part in online conferences, resort to remote working, stream online tutorials and so on.

Experts expect an ongoing push for digital transformation and virtualization, especially in the advanced economies, even after the pandemic fizzles out.

"Many businesses have discovered that going virtual is just fine," lansiti said. "I think office space will be reduced going forward and the prospects for commercial real estate will be grim for years."

This means that more people will prefer interacting online rather than traveling across continents for face-to-face conferences.

"That could, of course, have indirect positive effects on the climate as it will result in lower emissions of carbon dioxide and so on," Fredriksson said.

In the past few years, developing countries have been striving hard to reap the economic benefits of digitalization by addressing challenges related to infrastructure and accessibility. The pandemic has given them a further impetus.

Fredriksson cites the example of the Senegalese minister of trade, who has invited stakeholders in his country to come up with suggestions to promote home delivery of food and hygiene and health products necessary to contain the virus.

"The pandemic is triggering at the political level a need to look for how we can make use of the available technologies we have," he said. "But also, what do we need in the near future to address the weaknesses and barriers that still exist in our economies?"

Access to information is more crucial than ever. How can it be protected?

Governments across the globe have implemented sweeping measures to cope with the coronavirus crisis, often with negative repercussions for the right to information. Much-needed initiatives are stepping in. (09.04.2020)