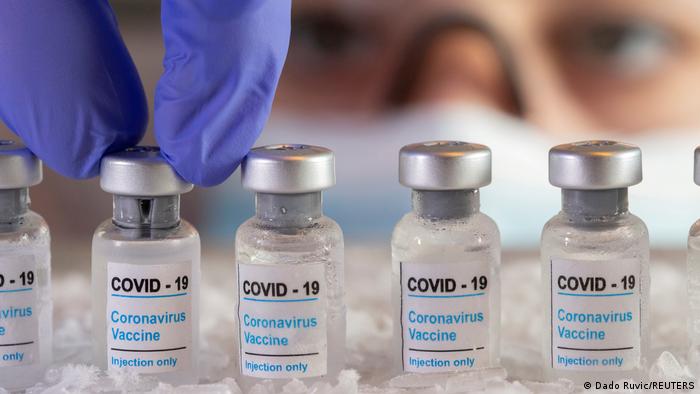 Several countries, including the UK and the US, launched immunization campaigns in recent days

The European Union is on track to approve its first COVID-19 vaccine ahead of Christmas. Amid political pressure, the Amsterdam-based European Medicines Agency (EMA) has moved up the expert panel review meeting on the BioNTech-Pfizer vaccine to December 21, eight days sooner than its original deadline of December 29.

The move comes after the United Kingdom and the United States launched their immunization campaigns in recent days.

"This is good news for the European Union," said German Health Minister Jens Spahn. "The goal is to achieve European vaccine approval before Christmas and to start vaccinating people in Germany before the turn of the year."

Journalists and EU citizens alike have been asking why the bloc is taking so long to approve the vaccine. The US Food and Drug Administration released the vaccine last week, and vaccine distribution began on Monday. The same is true for Canada, where vaccinations are also underway.

"We are doing everything to ensure that vaccinations can start in December," Spahn told reporters on Monday. "Every day we can start vaccinating earlier reduces suffering and protects the most vulnerable." His remarks have made it almost impossible for the EMA to continue the review process without time pressure.

Experts in Brussels have expressed dismay at the public political interference. "Politicians should be very careful about what they say in public and the expectations they raise concerning the vaccines," said Yannis Natsis of the European Health Alliance, an organization on the EMA board. "Above all, we need to keep public confidence in vaccines, and protect public health and safety."

What has COVID revealed about US public health?

"The EMA's careful review process has advantages," said Peter Liese, a member of the European Parliament and health spokesperson for the European People's Party.

"There is a lot of skepticism among the population as to whether a vaccine can really be put on the market that quickly," said Liese, who monitors anti-vaxxers and their arguments on social media. "You need to take these skeptics seriously, and you need to counter their arguments by enabling the best testing possible of the vaccine's effectiveness and potential side effects."

Liese explained why the EU approval process is taking longer. "The EMA is reviewing more data and going into more depth" when checking effectiveness, side effects and the number of tests, he said. He also noted that the EMA is working around the clock on the approval for the COVID-19 vaccine, with everything else currently on hold.

Liese urged the EU to stick to its present course and not follow the lead of the UK and US with their overnight emergency approval. Among other things, he warned, liability for possible consequential damage would be transferred from the manufacturer, BioNTech-Pfizer, to EU member states.

As recently as late November, the German health minister spoke out in favor of the tried-and-tested EU procedure, saying careful testing was important for confidence in the new vaccine. But it seems he has changed his mind — unlike Yannis Natsis, who said he understands the pressure and the emergency situation, but argued that "we have to be careful, we have to proceed with care — you can't push this through."

Natsis also warned against expecting too much. "Vaccines will not be the miracle cure politicians expect them to be," he said. And according to Liese, a few weeks either way won't make much of a difference; Germany won't find itself "in a different position in the pandemic process in the spring anyway." The question of what regulations can be eased in January has nothing to do with starting vaccinations as quickly as possible, he said.

Europeans not at a disadvantage

Liese criticized reports in Germany's Bild tabloid which said that millions of people were getting the German vaccine while Germans themselves had to wait, calling them

untrustworthy. "The vaccine was produced proportionally; it has already been allocated for Germany, some of it is already frozen and can be delivered at short notice," he said.

"I do not believe patients in the EU will be at a disadvantage compared to patients in Britain or the US," said Natsis. Over the summer, countries all over the world secured doses of promising vaccines, including the one by BioNTech-Pfizer. "The EU Commission acted for Europe and bought 400 million doses, which is enough for 200 million citizens because everyone needs to be vaccinated twice," he said.

Opinion: Europe can only beat coronavirus together

With the UK set to begin its mass COVID-19 immunization, British politicians have hailed the early vaccine approval as a Brexit success. But Barbara Wesel thinks they're telling blatant lies to claim undeserved credit.