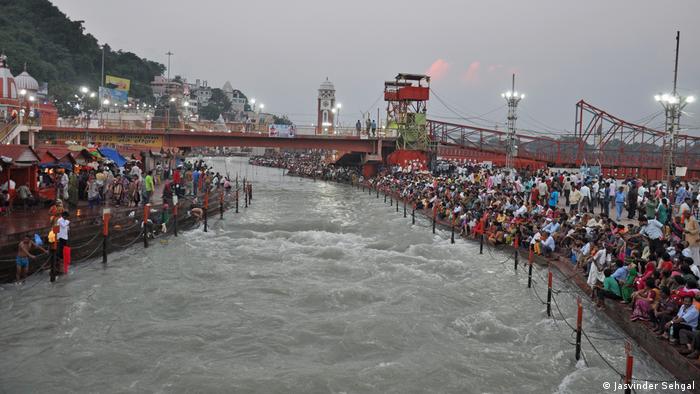 The sun is setting in Rishikesh, an Indian city in the Himalayan foothills. Hundreds of people have converged on the banks of the Ganges to sing hymns in praise of the goddess of the sacred river.

One group sits around a pyre to perform the yajna — a religious ritual carried out every evening for centuries to thank the river for flowing. The air is heavy with the aroma of cow dung cake, butter and sandalwood incense.

But worshippers are worried that the mighty Ganges, so central to the religion, culture and economy for millions of Indians, may in the future be reduced to a trickle.

"I have never seen such scanty water in the River Ganges," Gauri Pandey, a cobbler who has been coming here to worship for 45 years, told DW.
"I saw people walking in the river to another bank. The water level was below waist height. Some say if this trend continues, there are chances that Ganges may dry in the next 30 years." 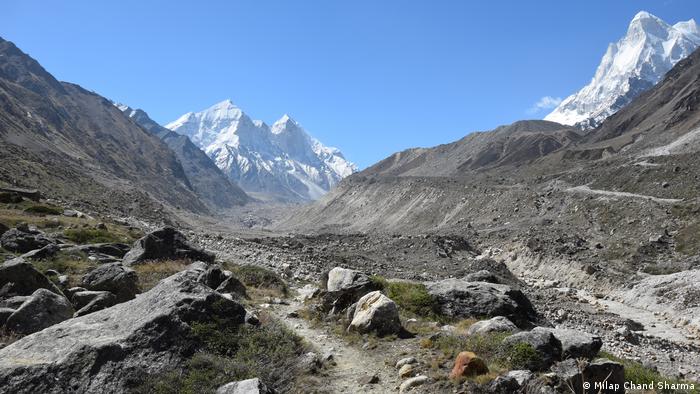 It is here, among the mountains, that the Ganges rises

Predictions and information about water levels vary, but the WWF has listed the 2,520-kilometer (1,568-mile) Ganges as among the world's most endangered rivers.

Scientists and environmentalists have pointed the finger at rising temperatures and receding glaciers.

The holy water originates at the Gangotri glacier, which is more than 5,000 meters (16,400 feet) above sea level on the Indian side of the snowy Himalayas, and provides 70 percent of the river's water.

But it is now shrinking at a rate of 22 meters per year — nearly twice as fast as 20 years ago.

"The glacier has shrunk by almost 40 kilometers in 50,000 years," said Milap Chand Sharma, the country's leading glaciologist and a professor at Jawaharlal Nehru University in New Delhi.

But he added that scientists believe human-caused climate change has resulted in a faster retreat. Winter snowfalls, which maintain the glacier, have been declining, affecting the amount of water flowing into the river annually.

Mahesh Sharma, a journalist attending the evening prayers on the river, has visited the glaciers more than 50 times in the last three decades and has seen the impact.

"The snow range has lessened," he said, adding that even at 5,000 meters, at the source of the Ganges, "you don't feel like wearing very warm clothes." 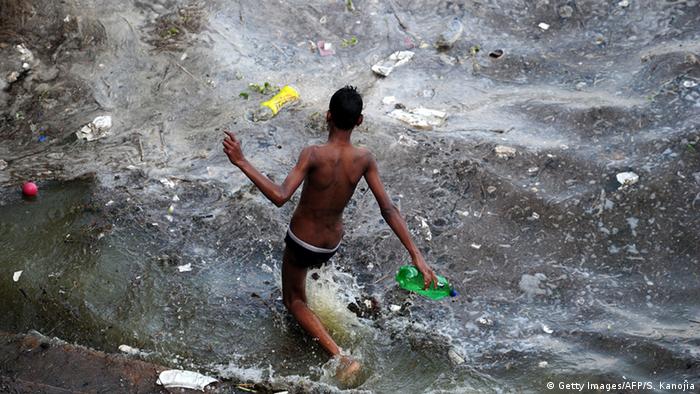 Efforts have been increased to clean the Ganges, one of the most polluted rivers in the world

The Ganges is not only central to Indian spiritual life — it also provides more than half a billion people with water for drinking and farming.

Eight states in India are already facing drought. And according to the International Water Resource Management Institute, industry and population growth will imply a 32 percent increase in national water demand by 2050.

Kamal Barua sells fish in a local market in Haridwar. He used to live in a village adjacent to Farakka town in west Bengal — but last year, he and his family had to move when the waters in which he fished were no longer deep enough to yield an adequate catch. They are not the only ones.

"My village was located at one of the largest rivers of the world — I never thought of facing scarcity of water in my entire life," he said. 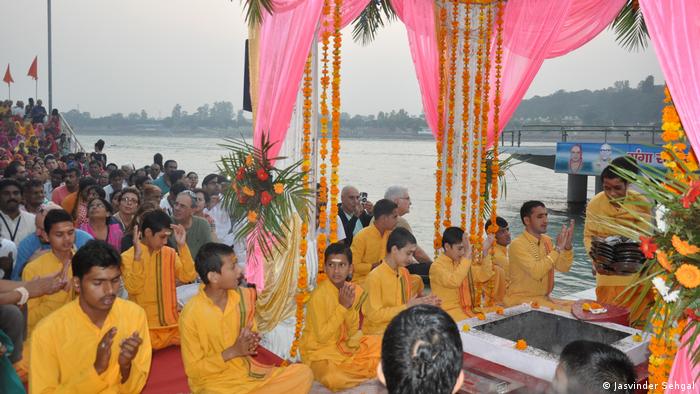 The Ganges is of great spiritual importance to millions of Hindus

Pollution, not climate change, a priority

But sinking water levels is not the only problem facing the river. By the time the crystal-clear waters have snaked their way down the mountains, past sprawling countryside and through burgeoning cities to meet the sea at the Bay of Bengal, they have become a filthy soup.

Sewage, along with agricultural and industrial waste, have earned the Ganges second-place behind Indonesia's Citarum on the list of the world's most-polluted rivers. And that is taking its toll on human health.

Gastrointestinal and enteric diseases are widespread. In 2012, the World Health Organization said more than 115,000 people in India died from water and sanitation related issues.

And a National Cancer Registry Program study reported a higher incidence of canceramong those living along its banks. India's government has invested more €2.5 billion euros in cleaning up the polluted waters — an operation that has thus far taken precedence over water availability, U.P. Singh, director general of the National Mission for Clean Ganga, told DW. But, he added, cleanup "is one of our important long-term goals."

To achieve it, policy-makers have proposed three programs that would interlink rivers across different parts of the country, increasing water supply to those that are drying up.

The Ganges is of great spiritual importance to millions of Hindus

But Rajender Singh, a winner of the Stockholm Water Prize — also known as the Nobel prize for water — considers the plans flawed.

"Interlinking rivers will not make India drought- and flood-free," he said. "It will create tension and conflicts in the country."

Singh, who has so far revived eight rivers and helped return water to more than 1,000 villages in the western Indian state of Rajasthan, says efforts to restore the Ganges are too focused on large-scale engineering approaches.

He promotes getting local communities involved in planting trees on riverbanks to deal with the problems of silting and erosion, and restoring tributaries that feed the Ganges.

"If we wish to free our country from drought and floods, we have to link people with rivers."

Given that Hindus already have such a profound relationship with their holy Ganges, that is a foundation that can be built upon.

And as Swami Chidanand Saraswati, founder of Ganga Action, stressed at the conclusion of evening prayers in Rishikesh, failure to act could have untold consequences.

"Losing glaciers means losing life — water is life, water is a blessing. That's why it is our prime duty to save the glaciers."