What happens when the values and self-interests of a state or society collide? DW editor Christoph Hasselbach has found that the topic of immigration offers some interesting object lessons. 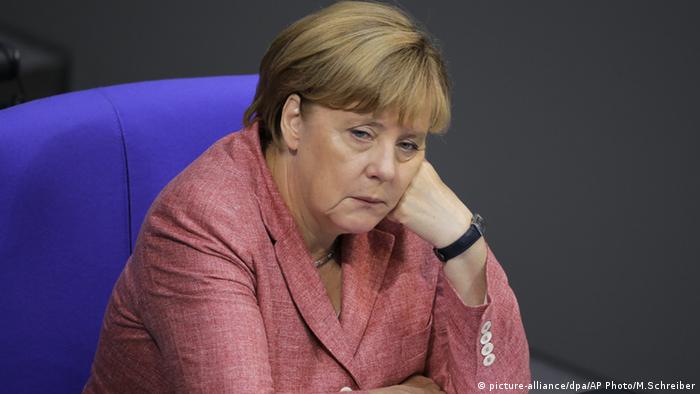 German Chancellor Angela Merkel spoke a lot about values when the refugee crisis began. European and Christian values, she insisted, must be defended. What she meant was that refugees must be welcomed. And that moral imperative prompted the chancellor to decree Germany's open-door refugee policy one year ago. She also repeated the fact that there would be no limit to the number of immigrants the country would welcome.

Last week, in the wake of yet another election defeat, this time in Berlin, she spoke of mistakes made, admitted the state's loss of control, and called her own "We can do this" slogan an empty phrase. Yet, one often had the impression that she was making those statements for primarily strategic reasons. Namely, to restore unity within the Christian Union parties (CDU/CSU), and lay the groundwork for another term as chancellor. She stopped short of recanting her own refugee policy.

The admission of unlimited numbers of people from different cultures, many of whom are poorly educated, cannot be in the best interest of a highly developed state. But that is exactly what Chancellor Merkel has long expected Germany to do - because of its values. Arguments put forth by politicians and business representatives, claiming that new arrivals would help business and could offset Germany's lack of skilled workers, quickly fell apart. Merkel did not actually need the outside help. In the choice between interests and values she had a clear preference for values from the start. Her attitude had something deeply Protestant about it: To do something, which one may not even like, to the point of self-sacrifice, simply because it seems morally necessary.

That may be an honorable approach in one's private life, but can a head of government expect as much of a country's citizenry - and more still, attempt to hitch the entire EU to the concept.

As long as values and interests are relatively congruent, that is not a problem. Difficulties only arise when they diverge. And that is the case here. Or perhaps better stated: That is how a large number of Germans see it in this case - not to mention citizens in the rest of Europe - and now a sizable majority clearly rejects Merkel's course.

Not everyone thinks that interests need be sacrificed for the primacy of values. Moreover: Which values are to be held high? Help for those in need is no doubt a universal value. But in other cultures the maintenance of a relatively homogenous culture is also considered to be a virtue. That is why Japan, for instance, has taken in hardly any Syrian refugees but has donated large sums of money toward providing for them in Syria's neighboring countries. The Japanese might say: In that way we have defended our own values as well as our own interests.

Merkel's actions reached yet another dimension on a diplomatic level. The chancellor has not only totally isolated herself in Europe, other nations, too, are now uncertain about Germany. Interests generally remain constant - when a state pursues its own interests it may be uncomfortable, but it is predictable.

But then, the German chancellor - generally thought to be the embodiment of sober reasoning - comes along and, all of a sudden, subordinates all her country's interests to her own personal understanding of values. This is the same chancellor, who, as a "physicist," was initially a vocal proponent of nuclear energy, but then wanted nothing of it after Fukushima (even though a tsunami like the one that set off the catastrophe is unthinkable in Germany). In France, such actions have given rise to the phrase "incertitude allemandes," German unpredictability.

Volatility and unpredictability are not things that other countries want from Germany. It has a reputation for shifting from one extreme to the other. Now, Merkel has spoken of refugee policy mistakes. A month ago, Bassam Tibi, a political scientist who immigrated to Germany from Syria decades ago, told DW that Germans might fall into the other extreme on the topic of immigration and the concept of a limitless welcoming culture. Let's hope that things don't go that far.

Over the last few years, Germany's states have sharpened their approach to dealing with those denied asylum. So far, 14,000 people have been deported this year. Among them are ever more refugees with illnesses. (22.09.2016)

The dark side of German reunification

A teenaged Syrian refugee has been arrested in Germany on suspicion of links to the self-styled "Islamic State" (IS) group. Authorities described the young man as a "serious threat" who had been planning a bomb attack. (21.09.2016)

Opinion: Erdogan is fighting to stay in power 16h ago